Pelham downs Chelsea, Stanhope Elmore for two in a row 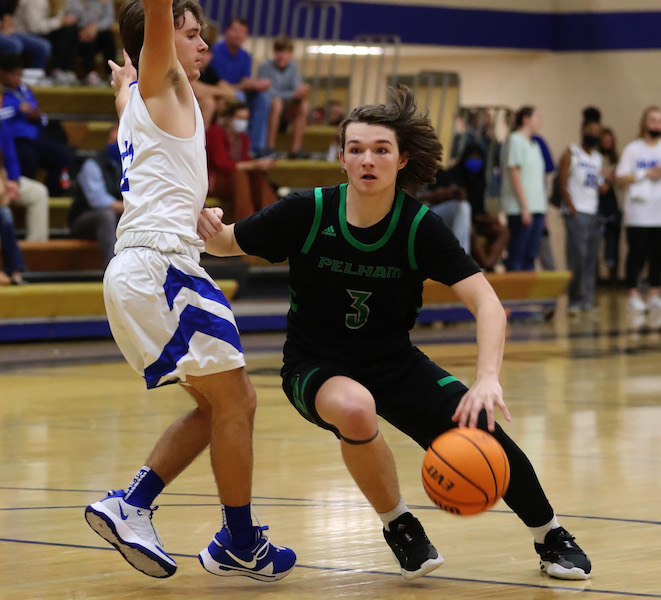 CHELSEA – For the first time in Greg Dickinson’s time at Pelham, the Panthers have won two consecutive games after taking down county rival Chelsea on Thursday, Dec. 3, and Stanhope Elmore one night later.

It started by taking down Chelsea in a county rivalry matchup, and despite a slow start offensively, the Panthers were able to find a consistent rhythm and hold off the Hornets in a 42-38 win.

In what has been an area showdown in recent years is now just a non-area matchup after reclassification sent the two teams to different areas, but that didn’t keep the two teams from wanting a big win early in December.

That showed in the first quarter when the two teams came out in a physical battle and combined for just six points in the opening period with Chelsea narrowly taking a 4-2 lead.

But Pelham’s defense was able to find some semblance of an offense before the Hornets, which led to the Panthers quickly snatching the lead away early in the second quarter.

They scored a quick three points to take the lead and eventually extended the run to nine points in a row with no answer from Chelsea.

While it was still a low-scoring game, Pelham scored 13 points in the frame, while the defense continued to play well, limiting the Hornets to eight points to give the Panthers a 15-12 advantage at the break.

The Panthers carried that confidence into the second half thanks to a spark from Darius Copeland, who posted eight points in the third quarter.

But as impressive as he was in helping Pelham post their best offensive quarter of the game with 14 points, the defense continued to play lights out.

The Panthers allowed just seven more points thanks to Copeland’s presence on the defensive side of the ball as well with five steals.

But well coached by Nick Baumbaugh, the Chelsea Hornets weren’t going to give up. They bounced back with some fight in the fourth period by scoring 19 points after failing to score more than eight in any of the other quarters.

The Panthers, however, did enough to fend off the fighting Hornets with their 13 points in the final quarter to pull off the four-point victory.

Chelsea was led by Paul Lanzi with a game-high 14 points.

One night later, the Panthers got back to the court with a road trip to Stanhope and this time they did it with offense. Pelham scored its third most points of the season with 67 and pulled out a second win in row by four points in a 67-63 victory.

The win gave Pelham two in a row and three of its last four games.