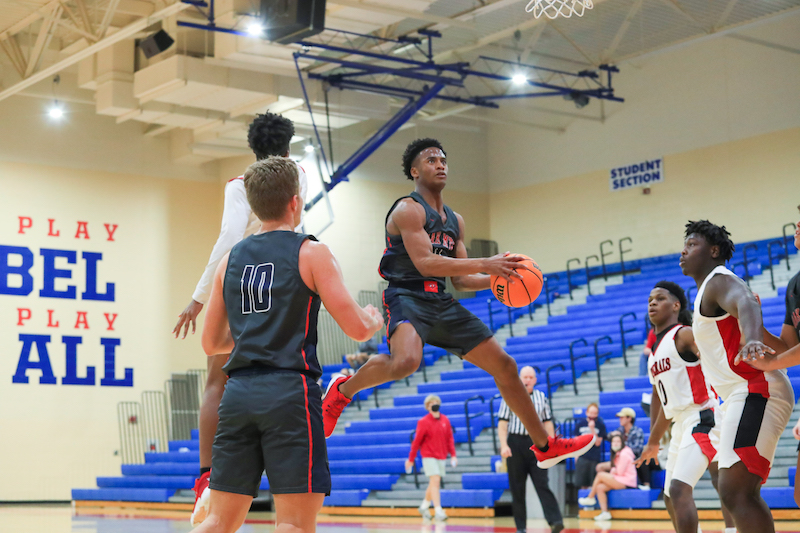 Oak Mountain's Evan Smith led four double-figure scorers in a win against Huffman on Friday, Dec. 4. (For the Reporter/Dawn Harrison)

BIRMINGHAM – With three wins during the week of Nov. 30, the Oak Mountain Eagles are starting to look more like the team that made school history with a trip to the Final Four last year.

The Eagles returned the majority of their starters from that team this year, aside from Player of the Year Zane Nelson, but early in the season, they have dealt with football players joining the team late and early-season injuries.

But starting during the week of Thanksgiving, Oak Mountain started to see the team intact, and now, the Eagles are off and soaring. They went 2-1 over the break with the only loss a 60-58 overtime loss to a very good Oxford team.

Following that loss, however, the Eagles bounced back with a win against Winfield to close out the Sneaky Pete’s Rebel Classic, and then went on to have a perfect next week.

Oak Mountain took down Hewitt-Trussville and Ramsay in back-to-back tight games on Tuesday and Wednesday, and then capped the week off with an 81-67 win against another good team in Huffman.

And that’s where the balance of the Eagles being back together truly showed off.

Not only did the teams two football stars, Evan Smith and Noah Young, have big games now that they are in a rhythm, but big man Will Shaver and sharp shooter Brady Dunn also scored in double figures.

With that balanced effort on offense, Oak Mountain got off to a strong start on that end of the floor and scored 17 or more points in every quarter of the game.

Huffman also showed fight on the offensive end, but the Vikings couldn’t quite keep up with the pace of the Eagles despite being close in every period.

In the opening frame, Huffman was right on pace with Oak Mountain throughout, but the Eagles used a strong run to make the difference.

That’s when we saw the first of two 20-plus point quarters for Oak Mountain.

After Huffman extended its run to 7-0 to take the lead at 19-18, the lead changed hands a few times early in the frame. But a 3-pointer by Matthew Heiberger broke a 24-24 tie and gave Oak Mountain the lead for good.

The Eagles used that to propel a 10-0 run, which led to a 21-point quarter offensively thanks to six points each from Dunn and Shaver as well as five from Young.

Oak Mountain was able to blossom their lead to 31-39 going into the break.

The Eagles let that fuel a strong start in the second half when they started on a 6-0 run to extend their lead to 14 points at 45-31 early in the third quarter.

Huffman, however, had a run of its own ready to roll. The Vikings outscored Oak Mountain 15-3 over the next few minutes of the period to cut the deficit to one point at 48-47.

But Dunn was ready for the moment and wasn’t going to let Huffman jump back in front as he ended the run with a crucial 3-pointer.

That sparked an 8-0 run to end the quarter, and it got Oak Mountain’s offense back on the right track.

Dunn hit another 3-pointer to start the final quarter to send Oak Mountain’s lead to 12 points.

Over the final few minutes of the game, Smith put together his best quarter of the night thanks to a strong stretch at the free throw line to finish with 11 points in the quarter, which helped the Eagles stave off any sort of comeback from the Vikings and pick up the 14-point win.

Smith finished the game as the leading scorer with 24 points, going 12-13 from the free throw line, taking four charges and adding in five assists. Young finished the night with 19 points and six boards, while Shaver and Dunn added 14 and 12 points, respectively for the 7-2 Eagles.