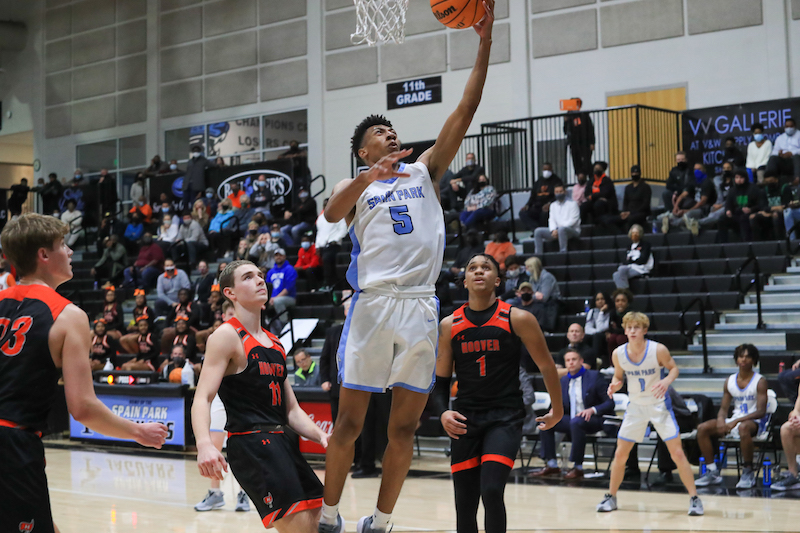 HOOVER – The remarkable start continued for the Spain Park Jaguars on Friday, Dec. 4, when they hosted crosstown rival Hoover for senior night and picked up their 10th consecutive win to start the season.

It’s a special turnaround for a team that was a combined 12-43 the two seasons before last year. And while the Jags finished last year with a trip to the Elite Eight, the start was average at 6-4 through their first 10 games, showing the continued growth for the Jags.

And they continue to play well down the stretch in tight games, which was no different in the matchup with their rivals, who are also one of the best teams in the state.

In a one-point game over the final 2:40 of the matchup, Spain Park, in particular Josh Harrington and Colin Turner, made clutch free throws down the stretch to lead the Jags to the tightly-contested win.

Hoover cut the lead to 47-46 with less than five seconds to play before sending the Jags back to the free throw line. Despite the miss on the front end, the Bucs’ final chance went by the wayside when they couldn’t get a shot off before the buzzer sounded, keeping Spain Park’s perfect season intact.

For a while, it didn’t look like the Jags were going to have to sweat out the game thanks to a strong start.

They were able to jump out to a quick six-point lead at the end of the opening quarter at 16-10, and got even better from there with a solid start to the second quarter.

The Jaguars started the first 1:39 of the period on a 5-1 run to extend the lead to 10 points. They eventually continued the impressive play by extending the run to 10-3 over a six-minute span to build the lead up to as many as 13 points.

Hoover was able to make some adjustments at the half and worked on trimming the deficit throughout third quarter.

But Spain Park did enough to maintain a nine-point lead going to the final quarter of play.

But with a 6-0 run in the first 1:46 of the fourth period, the Bucs got within three, and cut it to one point at 43-42 over the next four minutes with a strong defensive effort.

Hoover then took the lead by one point, but despite the momentum swing, the Jags were able to come right back thanks to the strong free throw shooting, which made the difference in the end.