MT LAUREL – Hilltop Montessori School will welcome a new head of school in the spring as longtime Head of School Michele Wilensky retires after 23 years on campus.

Dave DeHarde will come on board at HMS in mid-May after serving as assistant head of school for facilities and operations at the Montessori Community School in Durham, North Carolina.

DeHarde said he is grateful to Wilensky, HMS founder Cindi Stehr and other school representatives for their encouragement throughout the interview process. 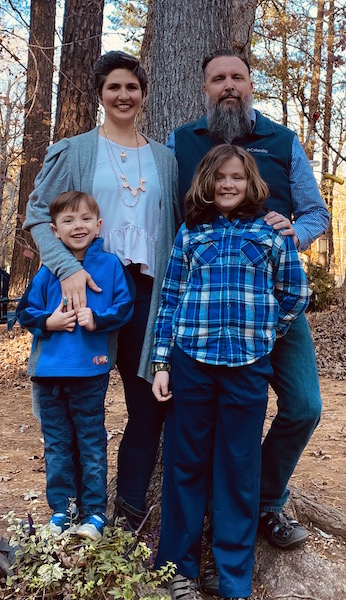 Dave DeHarde, pictured with his wife, Camille, and their two sons, Xavier and Abel, will transition into the role of Hilltop Montessori School’s new head of school following Michele Wilensky’s retirement in May. (Contributed)

“From day one, they were just as nice as they could possibly be,” DeHarde, 45, said. “I have never felt so welcomed. It really made the decision pretty easy for us to make the move.”

DeHarde said he and his wife of 11 years, Camille, and their sons, Xavier and Abel, are preparing for the move to Alabama in the coming months.

DeHarde will be closing his nearly nine-year tenure at the Montessori Community School, where he started as the toddler and primary program director before becoming assistant head of school about five years ago.

Prior to that, DeHarde worked for two years as campus director at the Boyd School in northern Virginia.

He first became involved with the Montessori method in 2002 at the Greensboro Montessori School, where he worked as a primary and lower elementary teacher for seven years.

He holds a bachelor’s degree in theater and minor in religious studies from the University of North Carolina at Greensboro and a master’s degree in school administration, and is certified in early childhood education by the American Montessori Society.

“I am thrilled that Dave will be our next head of school,” Wilensky said. “Upon announcing my retirement, I truly felt that I could not leave Hilltop unless the school was in good hands, and Dave will undoubtedly serve tirelessly with the same passion that others bring to our community. His love of Montessori and passion for independent school education was particularly evident during the selection process.”

Wilensky said DeHarde’s lengthy history of experience will bring a wealth of insight and inspiration to the HMS students and faculty.

“I am extremely confident in his abilities, credentials and personal strengths, and I am excited to hear about his progress over the coming years,” Wilensky added.

DeHarde was selected for the position from a large pool of candidates following a national search.

DeHarde said his family loves Durham, but he felt it was the right time to pursue the head of school opportunity at HMS.

His feelings were confirmed when he and Camille visited the campus.

“I looked at her and said, ‘This is it. This is where we’re supposed to be,’” DeHarde recalled. “It’s such a great school.”

The couple’s sons will attend HMS starting with the 2021-2022 school year.

Outside of his education career, DeHarde said he has enjoyed playing music for many years, most recently with a band he and his friend formed with two others called the Bull City Honkytonk Society.

“It’s been something to take the edge off this whole COVID thing,” he said. “We’ve done a few shows and played at different places. It’s been fun.”

They plan to continue their hobbies—and their journey with the Montessori method—in Alabama in May.

“We feel lucky the school embraced us the way they did,” DeHarde said of HMS. “We just feel so fortunate.”