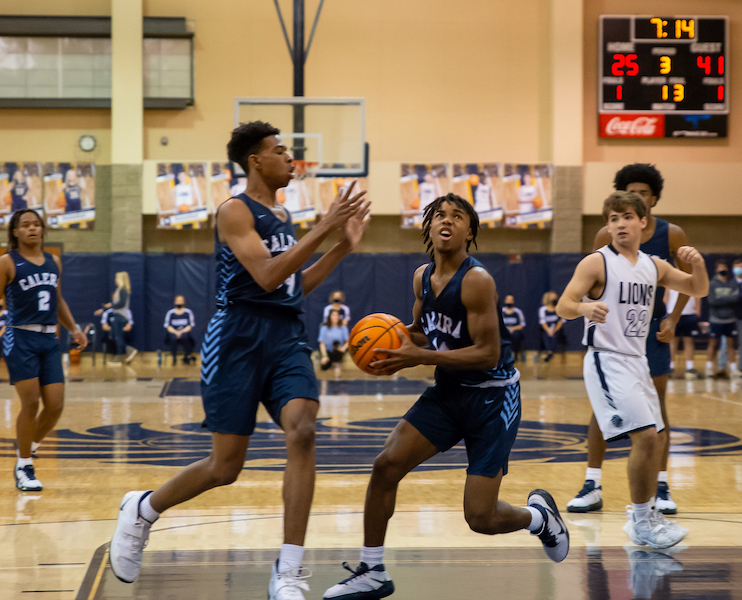 The Calera Eagles used four double-figure scorers to down Briarwood on Tuesday, Dec. 8, for their second win against the Lions in less than a week. (For the Reporter/Larry Dancy)

CALERA – Once again, the Calera Eagles got a balanced effort to pick up a win on Tuesday, Dec. 8. This time around, the Eagles had four score in double figures and 10 score in the game to help them take down county rival Briarwood 67-31.

The Eagles came out soaring in the first two quarters on both ends of the floor, which created the necessary separation to coast to the 36-point home win.

They set the tone in the first quarter with 18 points thanks in large part to Jordan Eggleston posting seven points, while Dee Edwards posted four points on two field goals, Keshawn Haynes knocked down a 3-pointer and Isaiah Green and Jamarius Ford both had one field goal.

That balanced effort offensively carried over to a strong showing on the defensive end of the floor as well, as the Eagles gave up nine points on three made field goals.

And while that first quarter was strong with Calera doubling up the Lions, it was the second quarter that truly made the difference in the game.

During the eight-minute span of the quarter, the Eagles came out and caught fire from the start and went on to post 29 points in the period.

A big reason was the success from beyond the arc with four made 3-pointers from three different players. Haynes led the way with two from deep and eight points in the quarter, while Green and Tre Stoutermire both posted five in the quarter. In addition to that, Justin Green knocked down a 3-pointer and four others had two points.

Briarwood had its best offensive quarter of the game as well, but the Lions only managed 12 points behind seven from Landon Nuyt.

That led to a deficit of 28 points at the half with Calera taking a 47-21 lead into the break.

Coming out in the second half, neither team saw as much offensive success the rest of the way, but Calera didn’t need it, as the Eagles focused on defense.

While they also scored 14 more in the third quarter behind five different scorers, the defense held the Lions to just 10 points in the period, extending the lead to 67-31 heading to the final quarter

With that comfortable lead for the Eagles, the final quarter went by quickly and with little scoring. Calera outscored the Lions 6-5 in the period to complete the 67-36 victory.

Calera was led by Eggleston with 12 points, while Isaiah Green and Haynes both added 11. Stoutermire also finished in double figures with 10 points, while 10 scored in all.

Briarwood was led by Nuyt with 14 points in the loss.

Local teams compete in Over the Mountain Wrestling Duals…