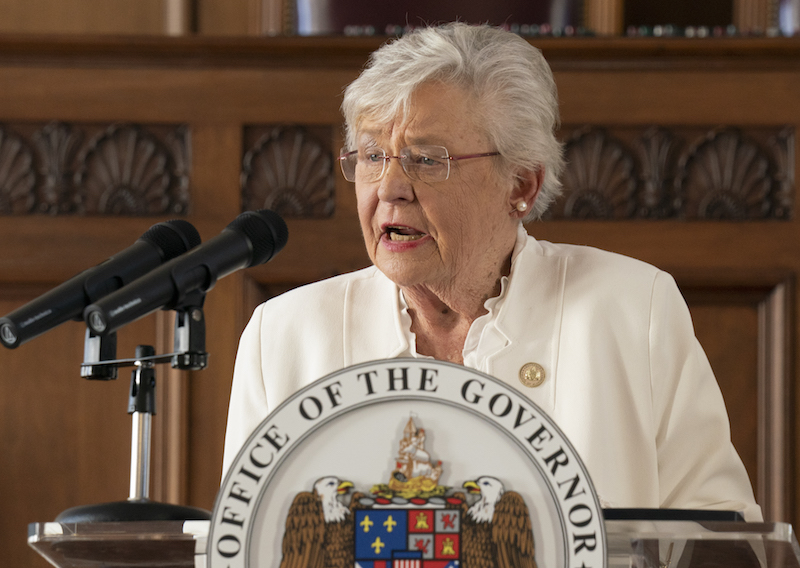 Alabama Gov. Kay Ivey held a press conference to extend the state’s mandatory mask order on Dec. 9, while State Health Officer Dr. Scott Harris gave an update on a vaccine being available in the next week. (Governor's Office/Hal Yeager)

MONTGOMERY – As expected, Alabama Gov. Kay Ivey extended the state’s mask-mandate order on Wednesday, Dec. 9 at a press conference in Montgomery, but the more pressing news came with talk of a vaccine coming to the state as early as next week.

Joining Ivey at the press conference, State Health Officer Dr. Scott Harris said the state expects to receive the Pfizer version of the vaccine as early as next week and can begin administering it that same day or the following day with phase one priority residents receiving it first.

“We do have some cause for optimism with the rollout of a vaccine,” Harris said during the press conference.

His comments came after also saying how difficult the past 10 months in the state have been, comparing the number of deaths each month to a Boeing 747 plane crashing each month.

But Harris said the vaccine is a welcome sight and he would have no hesitation in getting one.

“I’ll just say up front that if it is approved by the FDA and ACIP, that gives us all the confidence I need to take that vaccine,” Harris said. “I’ll take it myself, I’ll recommend it to my family and I’ll recommend it to you all when it’s your turn to get the vaccine. We have a lot of confidence in the safety process they have put in place for that.”

The vaccine, however, is going to take some time to roll out to the state for different reasons, and it could be until next summer when the average Alabama resident can get it.

The Pfizer version of the vaccine has to be stored at extremely cold temperatures and is a two-dose process that has to be taken at different times.

Doses will be shipped with close to 1,000 doses in each shipment, but due to the nature of the temperature they have to be stored at, they’ll only be kept in 15 different hospitals across the state at first.

The state also has a priority list for giving the vaccine with healthcare workers being at the top of phase one. Beyond that, nursing home staff and residents are next on the list as well as first responders.

“I think the most difficult thing for us to say after waiting all this time is that there just won’t be enough,” Harris said. “There is going to be a scarcity of vaccines and that’s going to continue for a while, and we want people to understand that.”

As a two-dose process, Harris said they expect 40,950 doses of Pfizer doses for the first one right off the bat, and then dose two will come in three weeks later for those people who received the first dose to get their second dose.

He also said the Moderna vaccination will likely be ready by then, which will be easier to ship and store, but will also require two doses.

Harris said the goal is to have as many of the phase 1A people vaccinated within a couple of weeks, but it will be much longer for a healthy, young Alabamian to get the vaccine unless they work in one of those essential services.

“We think by the spring, there will be a lot of vaccine out there. We will have covered hopefully most of the people in our phase-one group and can move on to others,” he said. “But it’s likely to be early summer before we have enough for the average Alabamian to receive their vaccine.”

In the meantime, as of Wednesday, Dec. 9, there have been 280,187 confirmed cases of the virus statewide since it began in March with 41,430 of those in the last 14 days. There have also been 3,985 deaths across the state in that same span.

The state has also seen 168,387 presumed recoveries and 27,323 hospitalizations.

Because of the time it will take to get the vaccine to everyone and the increase of cases recently, Ivey extended the state’s mask order until Jan. 22.

“Alabamians have been showing incredible resiliency in doing their part,” Ivey said. “Some even chose to forgo the traditional Thanksgiving celebrations in order to be safer rather than sorry, and while that may have been a very difficult decision, it was still a wise decision. None of this is easy.”

Ivey urged that same caution going into the upcoming holiday weeks as well.

“As we transition from Thanksgiving to the season of Advent and the celebration of Hanukkah or other reasons that bring families and friends together, please be mindful of your activities,” she said.

She also said that just because a vaccine is on the near horizon, we shouldn’t get complacent in thinking we are out of the woods yet.

“To the contrary, these are some of our darkest days since COVID-19 became a part of our daily conversations,” Ivey said. “The facts are indisputable. Our cases continue to rise and we have more Alabamians diagnosed with COVID-19 than ever before.”

She said there has been no more discussion on locking down the state and the economy again because the people are doing their part in helping prevent the spread to the best of their ability by wearing mask.

“Because the pandemic has stretched much longer than we ever imagined, we’re all just downright exhausted by the disruptions to our daily lives,” Ivey said.  “We look forward to the days where we can greet one another again and interact in public while easily seeing each other’s faces and smiles that aren’t hidden behind these blooming masks.

“Let me remind the people of Alabama as clearly as I can, wear your mask, wash your hands and sanitize your personal spaces as much as you can. And y’all, I’m not trying to be Gov. MeMaw as some on social media have called me, I’m simply trying to urge you to use the common sense the good Lord gave each of us to be smart and respect others.”

Ivey closed by asking everyone to be considerate of vulnerable members of your family and those you work with as the state strives to get back to normal with the arrival of a vaccine.