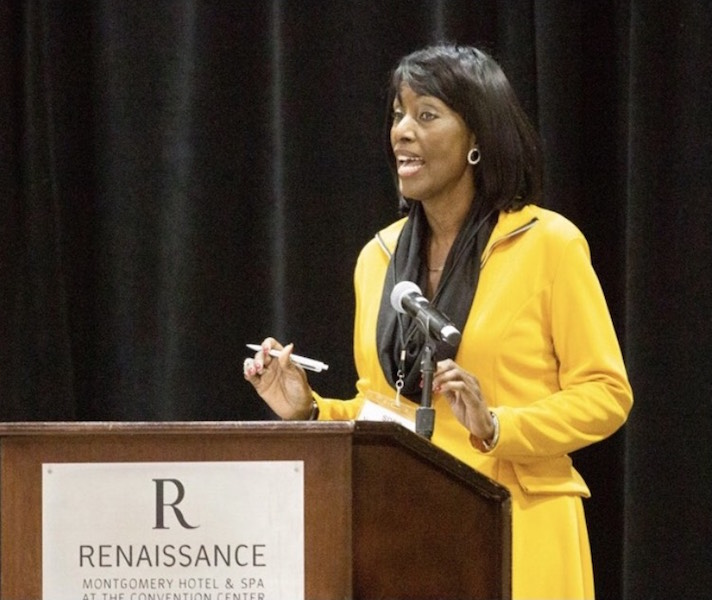 Carole Marks has resigned from her position as chair of the Shelby County Democratic Party after more than five years of service. (Contributed)

HOOVER – A leader of the Shelby County Democratic Party is stepping down from her position after more than five years of service as the group’s chair.

Greystone resident Carole Marks submitted her resignation in November, closing a chapter of work in which she helped to reorganize and grow what had been a relatively small, unknown group in the past.

“In June 2015, I received an email stating that the chair of the Alabama Democratic Party would be coming from Montgomery to Shelby County for a special meeting to reorganize the Shelby County Democratic Party,” Marks said. “I was invited to attend. In addition, I was asked to support a candidate who wanted to serve as chairman.”

Marks and her husband, Al, were among 11 people who attended the meeting. She had nominated the person who had asked for her support in advance, but he declined after changing his mind during the meeting.

“I was nominated on an impromptu basis by someone who happened to know me professionally,” Marks said. “I reluctantly accepted. My reluctance derived from being newly retired from professional and political pursuits, and having no further interest in political leadership.”

The reorganized party was successful, and Marks was elected to a second term in August 2018. She was also appointed as an at-large member to the State Democratic Executive Committee.

The Shelby County Democratic Party is one of 67 official parties within the state and is registered with the Democratic National Committee.

As her first term as chair began, Marks said she quickly realized she had inherited a small group that had flown under the radar in terms of visibility.

“Recruitment and raising public awareness throughout the county became my mission,” she said. “I am pleased to say that our group has become both well-known and recognized at the Democratic state level as an example of a successful county model. We now recruit and support candidates.”

During her tenure as chair, Marks was instrumental in growing the group from 11 participants at the initial meeting to more than 200 members and volunteers.

Increased membership allowed the group to initiate an annual Blues and Barbecue fundraiser that has collected several thousand dollars over the past five years.

“Annual attendance peaked at over 200 tickets sold in 2018, and we donated more than $25,000 to candidates,” Marks said, and added, “We put in hard work in order to build the party and form coalitions and relationships that became a grassroots movement to celebrate a victory for Sen. Doug Jones in 2017. While this included all of Alabama, Shelby County made a great showing that was worthy of recognition in the local news.”

Marks said she is most proud of assisting with reorganizing the statewide Democratic Party in Alabama, noting the process included rewriting the bylaws for submission to the Rules and Bylaws Committee of the DNC.

“In addition, I presided over two meetings in Montgomery to elect new state leadership and caucuses,” Marks said. “Lastly, I was honored to serve when incoming State Chairman Christopher John England asked me to serve as Transition Team Chair of the Counties Committee. The state party is now thriving with new leadership, and I am pleased to have been a part, representing Shelby County, in making progress happen.”

Marks said she began to think seriously about resigning after her two grandchildren were born.

“Instead of managing and taking care of non-family commitments, I want to devote more time to developing a closer relationship with my grandchildren without having to plan and implement the next step for the party,” she said. “I feel that our new chair, Dr. Marsha Sturdevant, will do a good job in continuing to build the party. I will remain a member, and I will support the new chair in an advisory capacity from time to time.”

Prior to moving to Shelby County and becoming involved with the Shelby County Democratic Party, Marks retired from the University of Alabama at Birmingham and Children’s of Alabama, where she was responsible for donor relations.

A Brighton native, Marks called Hueytown home for 38 years and was elected to two terms on the Hueytown City Council. She also served as council president.

Marks and her husband have been married for more than 50 years and have three children and several grandchildren.

“I thank God for the many accomplishments that I have been blessed to accrue, and I have no future plans for external leadership,” she said. “I am looking forward to launching household projects and enjoying my family.”