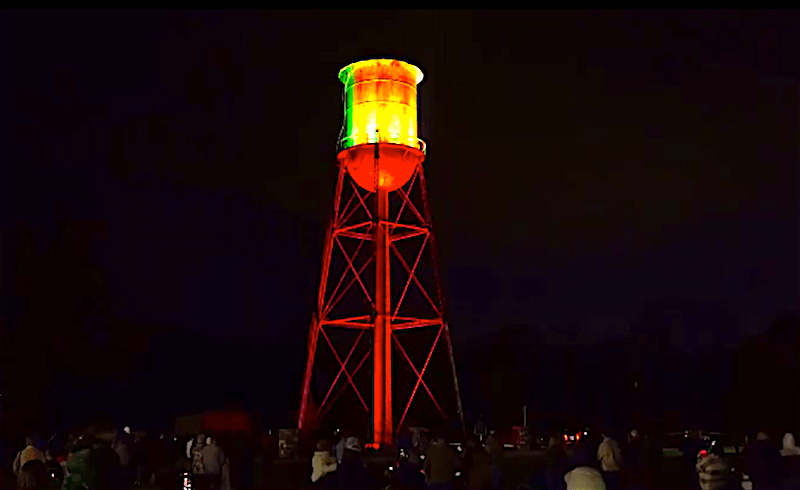 The Alabaster water tower lit up the night sky on Saturday, Dec. 5, when the city held its inaugural water tower lighting event. (Contributed)

ALABASTER – The city of Alabaster held its inaugural water tower lighting event on Saturday, Dec. 5 following the city’s Christmas parade earlier that day to help ring in the holiday season.

The event had a variety of food trucks for everyone to enjoy and had a great turnout, Alabaster City Planner Brian Binzer said. The lighting was one of two holiday events held over the weekend in addition to the parade and took place at 5:30 p.m. to have the tower illuminate the night sky.

Mayor Scott Brakefield welcomed everyone to the event, followed by a number of musical performances.

“We had a number of different activities going on for the event, so we kicked off with the mayor welcoming everybody. We had a pretty good crowd and the big green space at the city hall gave people room to space out properly,” Binzer said. “We had five food trucks, the mayor welcomed everybody, Santa arrived on the fire truck and was there for the opening, and we had several people singing and performing.”

Councilman Jamie Cole even got in on the singing, performing a duet alongside Charissa Cole, while Sandi Giles performed a solo song and Kingwood Church did an act and a song from its production of Scrooge.

The festivities were followed by a countdown of the lighting, which is a new addition to the city’s water tower and to their holiday event calendar.

Binzer hopes to include the water tower lighting event for holidays in the future as well such as the Fourth of July as well.

“Basically we purchase some LED lights from a special contractor who creates them for water towers. They do a lot of fun patterns and they are Christmas themed,” Binzer said. “As we have things that come up, whether we want to recognize the Fourth of July, we can do red, white and blue, and it will be cast on the water tower.”

The tower is visible from a good way away and will be used throughout the year to not only recognize special holidays, but also bring awareness during months like cancer and autism.

The event was well attended with hundreds of community members filling the green space and watching from their vehicles in the parking lot.

“(The event) was well received, and I think people enjoyed themselves. We had SkyBama come with the drone so there are pictures of the event on their site and it was pretty well attended,” Binzer said.