Briarwood hits 3 at the buzzer in one-point win 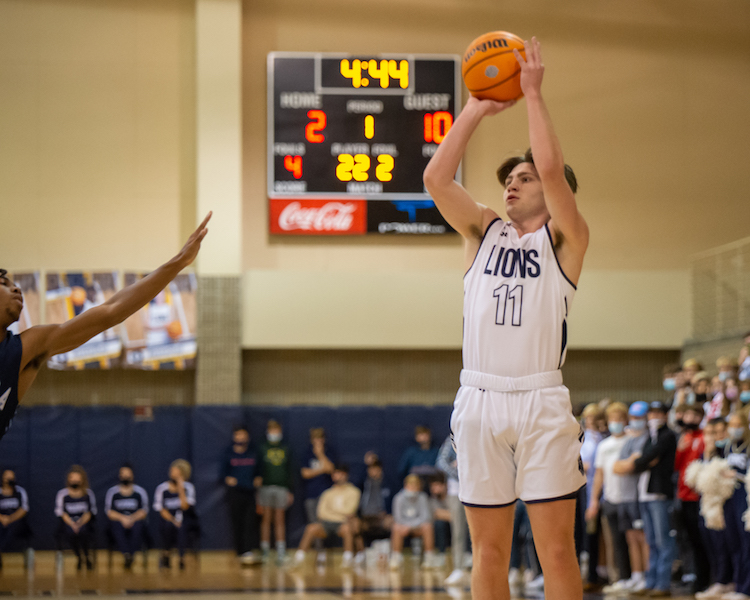 The Briarwood Lions picked up a thrilling win against Woodlawn on Thursday, Dec. 10 thanks to a last-second 3-pointer. (For the Reporter/Larry Dancy)

BIRMINGHAM – With five seconds remaining and the Briarwood Lions trailing Woodlawn 53-51, there was no hesitation in making the decision that came next.

With three players stacked on the right side of the line in sync with the inbounder and one player in the circle on the far left side, the Lions put together a play hoping for the win.

Immediately, Baylor Gann rolled around to set a screen for Landon Nuyt, which set the play in motion. Instead of following Nuyt, two defenders went to Gann on the confusion of switching the Screen.

That forced the defender guarding Stratton Ponder to immediately v-line to Nuyt, who had nine point in the final quarter to that point.

But, with that decision, the Colonels left Ponder, who had already knocked down three 3-pointers, open beyond the arc. Brooks Donnelly immediately noticed and fired the ball to him. Ponder, caught it, stepped into his shot from NBA-range and drained it over the outstretched reach of the late Woodlawn defender giving Briarwood a 54-53 win.

As the shot was barreling toward the basket, Donnelly held up three fingers, knowing he had the game-winning assist before it even hit the net. That’s when the Lions sprinted to the other end of the court and the dog-pile celebration began.

It capped off an impressive night for Ponder, who finished with 14 points on four made 3-pointers, while Nuyt was the perfect decoy after finishing with 17 points, including 13 in the second half.

It was also a fitting end to a tightly-contested game throughout.

In the opening quarter, the Lions were able to take the early lead thanks to five points from Ponder and a 4-4 mark from the free throw line, which played a part in a 12-point quarter.

That, in addition to the defense holding Woodlawn to eight points, led to Briarwood grabbing a quick four-point advantage at the end of the first quarter.

Woodlawn came back in the second quarter with 14 points thanks to draining two 3-pointers and making four of its five free throw attempts.

But the Lions added 14 themselves with another three from Ponder as well as one from John Elliott and four points from Gann. That helped them maintain a four-point lead at 26-22 going into the halftime break.

Coming out of the break, Kelvon Townsend turned up his game for the Colonels. He scored 10 of his 22 points in the third quarter, which helped Woodlawn post its second straight 14-point quarter.

The Lions, however, hung tough in the period with 13 more points as Nuty had his second four-point quarter in a row and was joined by Will Brewer.

But in the final quarter, Woodlawn finally capitalized on a momentum shift and did a lot of it at the free throw line making eight attempts in the quarter. That was in addition to one 3-pointer and three jumpers for 17 points.

That helped the Colonels erase the three-point deficit and take the late lead.

Nuyt, however, saved his best quarter for last. He totaled nine points in the period to keep the Lions intact and prevent Woodlawn from pulling away.

That, along with Ponder draining a 3-pointer, helped Briarwood even have a chance late.

Then, in the final seconds, Ponder was able to seal the win with his second 3-pointer of the period, as he and Nuyt combined for all 17 of the Lions’ points in the final quarter.

In all, Briarwood got points from eight different players in the win.