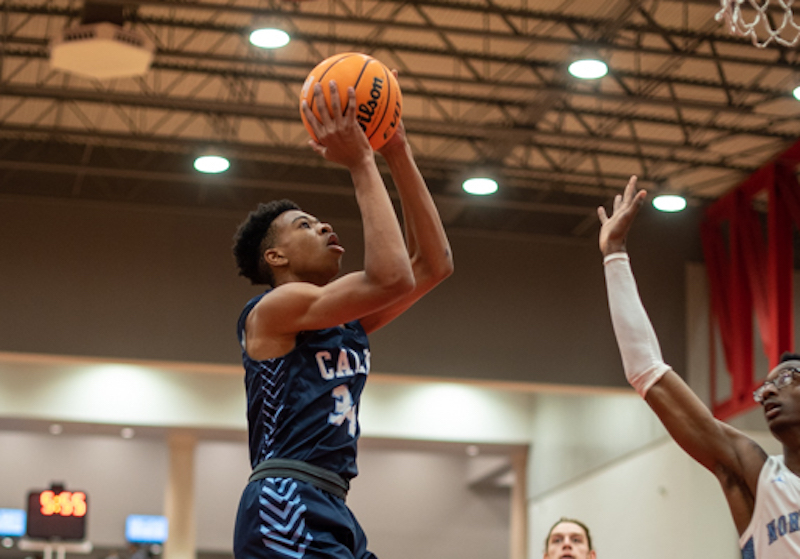 The Calera Eagles posted 91 points against Montevallo to pick up a 24-point win in a county rivalry. (File)

With the victory, Calera’s senior class closed out their career without one loss to the Eagles over the last four years, and several showed out in a spectacular offensive showing.

While Montevallo’s Michael Jones put up another strong performance behind 29 points, he was the only Bulldog to finish in double figures scoring, while the Eagles had four score at least 10 points.

They were highlighted by Jordan Eggleston with 24 points, while Xzayvion Childress posted 15 points, Tre Stoutermire 14 points and Isaiah Green 10 points.

It was an all-around balanced effort from the Eagles, who got points from nine different players.

Remarkably, in eight-minute high school basketball quarters, Calera scored 22 or more points in every period of the game, including a fast start.

In the opening quarter, the Eagles posted 23 points behind six different scorers. Four of those scorers had at least four points, while Eggleston led the way with six in a strong start.

Calera also showed up defensively by allowing just 13 points to the Bulldogs in the first quarter of the game, seven of which came from Jones.

But Montevallo found more balance in the second half, which led to a better offensive effort.

The Bulldogs posted 22 points behind three different players knocking down a 3-pointer and seven different scorers in the period.

That, however, was only enough to equal Calera’s effort. The Eagles posted 22 themselves thanks to eight points from Eggleston and Childress, who knocked down two 3-pointers in the quarter.

Coming out of the break, the Bulldogs had some confidence on offense, but the Eagles also made adjustments to on the defensive end.

Montevallo got 10 more points from Jones in the third but only totaled 16 as a team.

Calera, however, continued its offensive dominance with its best quarter of the game behind six points each from Green and Stoutermire to play a part in a 24-point period.

That helped the Eagles extend their lead to 69-51 heading to the final quarter.

Montevallo got a more balanced attack in the fourth, but Calera continued to be too much on the offensive end. The Eagles posted 22 more points to cap a tremendous showing offensively and pick up the 91-67 win.

Chelsea wins in OT for 8th in a row