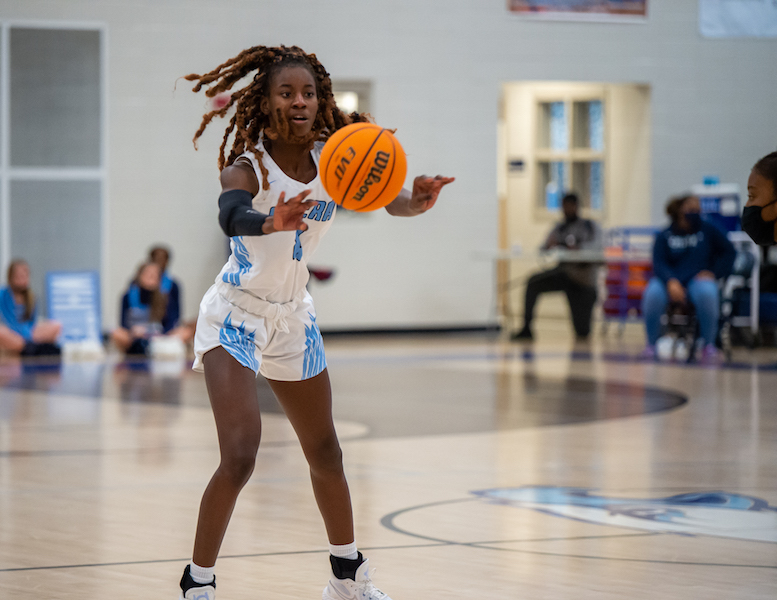 Calera’s girls basketball team put together a 40-point first half against Montevallo on Dec. 12 to pull away for a 65-36 victory. (For the Reporter/Larry Dancy)

MONTEVALLO – It has been an up and down ride for the Calera girls basketball team this season, but on Saturday, Dec. 12, the Eagles had one of their best games of the season in a dominant 29-point win against rival Montevallo on the road.

The Eagles jumped out with two of their best offensive quarters this season in the first half with 21 and 19 points to bust the game open and never looked back en route to winning the game 65-36.

As part of the impressive start, Calera not only played its best quarter of the game offensively in the opening quarter, but combined that with its best defensive effort of the afternoon as well.

The Eagles stormed out of the gate to post 21 points on the offensive end and paired that with giving up four points defensively, which gave them a comfortable lead from the start.

From that point, Montevallo was already in a hole that was going to be difficult to climb out of, and the Eagles made it even steeper of a climb in the second quarter.

Calera posted 19 more points on the offensive end, and while the defense had its worst quarter of the game, the Eagles still only gave up 13 points, which allowed them to take a 40-17 lead into the break.

The second half was played much closer, but the damage was already done.

Calera never did get outscored during any quarter of the game and extended the lead by four more points in the third quarter thanks to 15 more points on the offensive end and the defense giving up just 11 points.

That gave the Eagles a 55-28 lead heading to the final quarter.

Calera had its worst offensive frame in the final period, but just trying to ice the game, the defense played its second best frame of the game by giving up just eight points to close out the 65-36 win.