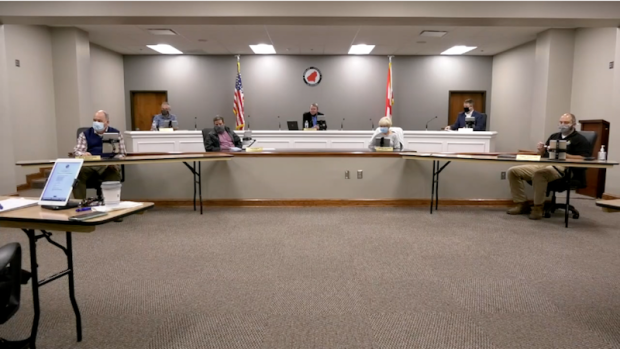 The Shelby County Commission approved bids at a Dec. 14 meeting, including one for a traffic signal installation project at the intersection of Shelby County 36 and Shelby County 11 in Chelsea. (Contributed)

COLUMBIANA – The Shelby County Commission approved several resolutions at its Dec. 14 meeting, including one for a traffic signal at an intersection in Chelsea and another for the retirement of a county fixture.

The Commission awarded a $144,062 bid from Stone and Sons Electric for the installation of a traffic signal at the intersection of Shelby County 36 and Shelby County 11 in Chelsea.

County Engineer Randy Cole thanked Chelsea Mayor Tony Picklesimer for the city’s willingness to meet the county halfway on the cost of the signal installation at the intersection, which is located near a railroad crossing.

“We got a really good price on that,” Cole said, adding the work on the installation will start when the parts can be procured. “It will be a little while before it’s up and operating. We’ll get it up as soon as we can.”

Cole said a gas generator at the intersection will serve as a backup source of electricity for the traffic signal in the event of a power outage.

Another resolution honored Carol Hill upon her retirement after 11 years of service as Shelby County’s Board of Registrars chairman.

“Carol Hill has maintained the accuracy and integrity of the county’s voters’ lists,” the resolution read. “Carol Hill has exhibited strong and progressive leadership on behalf of Shelby County and its citizens during her role as chairman of the Voter Registrar’s Office.”

She has also served as a board member with the Shelby County Arts Council and with Leadership Shelby County on the organization’s “Legislative Day.”

Hill and her husband, Rep. Mike Hill, have been married for nearly 50 years and have three children.

By CINDY WARNER / Special to the Reporter  CHELSEA – Students enrolled in the Health Sciences program at Chelsea High... read more