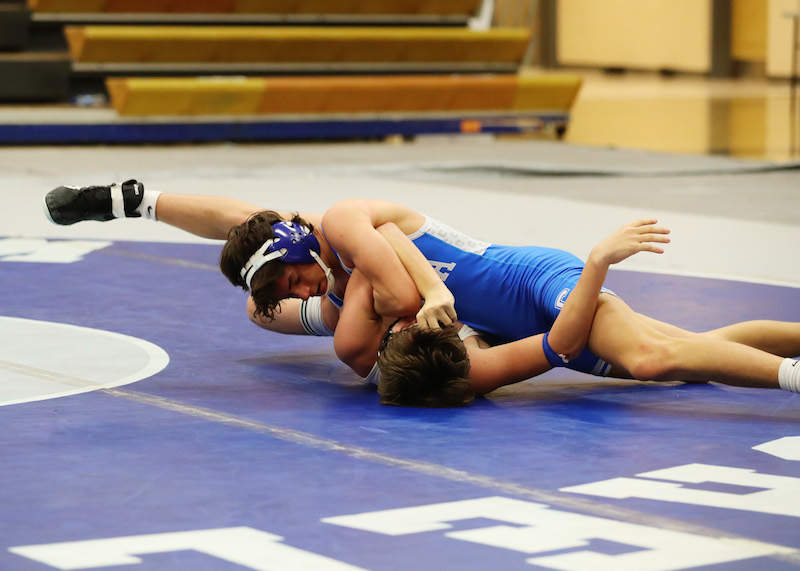 The Chelsea Hornets finished second at their own wrestling tournament behind only Hoover. (For the Reporter/Cari Dean)

CHELSEA – On Saturday, Dec. 12, the Chelsea Hornets’ wrestling team hosted a quad match with Fort Payne, Hoover and James Clemens. Though Hoover walked away undefeated, the host team was a close second as the won two of their three matches.

Chelsea’s 106 Cale Tucker went 3-0 with two falls and a forfeit, while the 152 Harrison Brakefield went 2-0 for the night with two falls. Both wrestlers were able to score against a tough Hoover team and walk away with an unblemished record for the evening.

Chelsea’s first match was against Fort Payne which the Hornets won with a score of 48-36.

Neither team put less than six points on the board with each matchup, but Chelsea was able to put up 12 points more to grab the win.

Chelsea’s toughest match of the night was against Hoover High School, which the Hornets lost 42-24. They were able to putt some points of the board thanks to two pins, two decisions and a medical forfeit.
106 Cale Tucker won by pin over Jake Thompson with a fall time of 5:12
113 Walker Baker won by decision over Baylor Hardy with a score of 11-9
120 Taylor Rayford won by pin over Camden Harris with a fall time of 0:50
152 Harrison Brakefield won by decision over Jack Gibbs with a score of 14-12
160 Colton Sills won over Jacob Johnson by medical forfeit