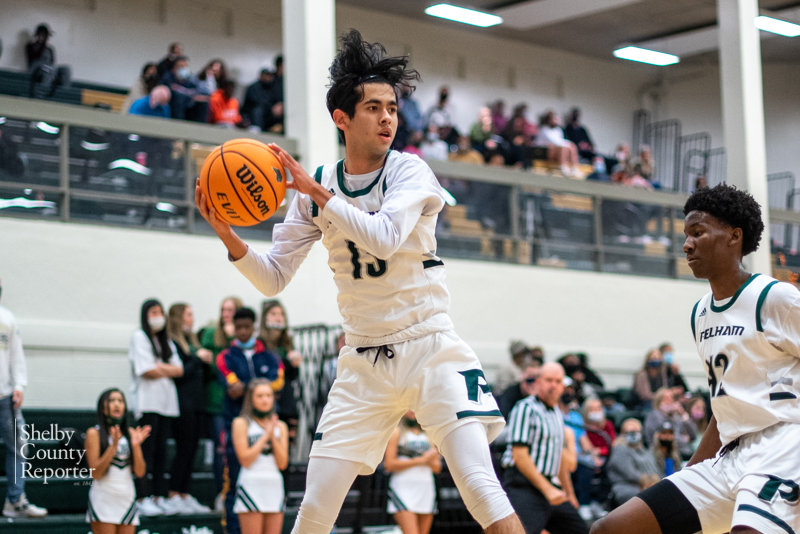 The Pelham Panthers pulled off a comeback on Dec. 15 thanks to a dominant defensive effort to take down Pell City by three points in overtime. (Reporter photo/Keith McCoy)

PELHAM – Determined to will the Pelham Panthers to a victory on Tuesday, Dec. 15, Evan Pate flipped into a new gear when the Panthers’ matchup with Pell City went into overtime.

The senior guard was an energy boost for the team, picking up three steals and scoring six of Pelham’s seven points in the extra period. His presence on both ends made the difference, helping prevent points from Pell City while outscoring the opposing Panthers 6-4 on his own.

That helped break a 39-39 tie at the start of the overtime period by propelling the home team to a 46-43 overtime victory. Pate finished the game with 14 points, three assists and those three steals.

Despite a defensive battle for much of the game, the first quarter was electric on the offensive end, kick starting the exciting matchup.

It was Pell City who came out on fire, however, posting 17 points in the first quarter.

Pelham also posted its best offensive quarter of the game, but with 13 points, the Panthers still trailed by four points at the end of the period.

But the rest of the way, Pelham’s defense did exactly what it needed to do to claw back into the game.

In the second quarter, the deficit got bigger, but you could see the shift in the Panthers’ defense. Pelham only scored three points in the quarter as part of an offensive drought, but held Pell City to just eight points.

That put PHS in a 25-16 deficit at the half, but head coach Greg Dickinson and the Panthers knew all they needed was a slight spark offensively with the defense now performing.

And that spark came in the second half.

It helped that the defense played lights out, leading to points on the other end. Pelham held Pell City to just five points and went on to score 11 points themselves to claw to within three points at 30-27.

That carried into the fourth quarter as well, but with several momentum swings, both teams came close to winning outright in the fourth. But at the end of it, Pelham scored 12 points to Pell City’s nine, forcing overtime.

Then, the Panthers completed the comeback victory behind Pate’s strong performance to close the game.

In addition to him, Roy Gonzalez was key with 11 points behind three 3-pointers, while Kendan Maddox posted nine points and had three blocks defensively with four rebounds.

Vincent bounces back with in dominant fashion at Childersburg