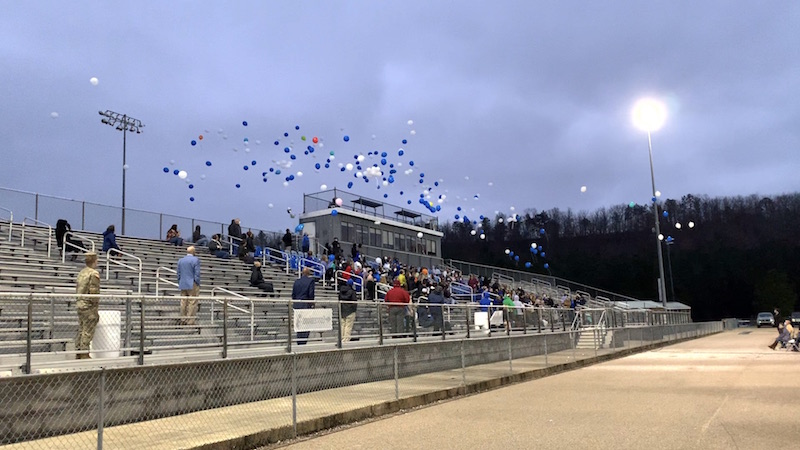 CHELSEA – Dozens of blue and white balloons floated into the sky above the Chelsea High School campus on Wednesday, Dec. 16 as those who released them watched in silence.

The balloon release came at the end of an emotional ceremony held in memory of Chelsea Middle School teacher Julie Yeager, who passed away Dec. 9 at 56 years old.

Those who spoke at the ceremony used words such as “encouraging,” “selfless,” “loving” and “warm-hearted” to describe Yeager, a longtime teacher, esteemed coworker and beloved friend to many.

Grantham said Yeager’s influence on him propelled him to become a valedictorian in high school and then earn a college degree.

“She told me how proud she was of me, and that right there meant more to me than that degree ever could,” Grantham said. “I’m going to honor her by continuing to be the best person I can be, the person she saw in me. I think that’s the way that everyone here, everyone that knew her, can honor her – by being your best self, reaching the potential she saw in us, not letting her down. I think we owe her that.”

Jay Hairston echoed Grantham’s sentiments, noting Yeager was instrumental in helping his son, Eli, catch up in his academics after he was hospitalized for several months following a traumatic brain injury he sustained in a golf cart accident last year.

“She poured into Eli and made his goals her goals,” Jay Hairston said. “Ms. Yeager saw in him what in that moment he couldn’t see in himself, and she loved him to the point that he could eventually see it. She pulled the best out of him.”

Hairston said Yeager’s legacy is that of love, of care and of concern for others.

“She was one of the most intentional people I’ve ever been around in the sense that she never let a moment pass by without its intended purpose,” he said. “She was a difference-maker in so many lives. The best way we can honor Ms. Yeager is to live like she lived. She used every second of every day to impact others, and I’m just so proud to have known her and to be one of those people whose lives she impacted.”

CHMS teacher Lee Hibbs described Yeager as someone who loved her family, her job as a teacher and her students, among many other things.

“I wanted to honor my sweetheart by sharing some of her loves,” Hibbs said, emotion filling his voice. “She loved her school family. I can’t tell you how much she loved Chelsea Middle School.”

Hibbs said Yeager also had a “zest for living” and put her whole heart and soul into everything she did.

And she was known for a smile “so big and bright it would light up the darkest room,” he added.

“That was the first thing that I probably fell in love with,” Hibbs said. “She could make a bad day turn into a good one. She could make a problem go away just with that little smile that she had.”

Yeager taught for more than 20 years at CHMS.