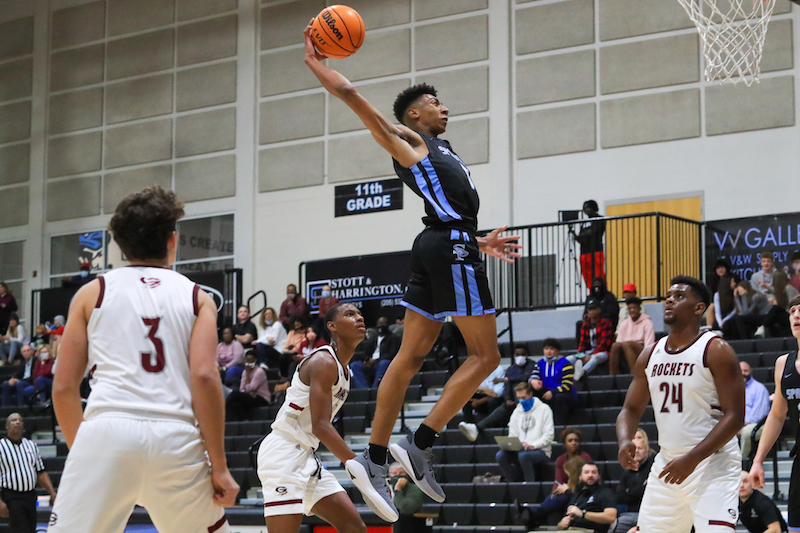 The 2020-2021 basketball season is now in full swing, and while there have been some up-and-down moments due to COVID-19, we have also seen some big wins and impressive starts from several teams, and those teams were recognized in the first ASWA basketball rankings of the year.

In all, 10 teams represented in the top 10 of their classification, while four others were nominated for a spot.

But one team has stood out this season.

While the Spain Park girls have consistently been the county’s highest ranked team the last few years with two titles in the last three seasons, this year, it’s the boys who came in as the highest ranked in the first poll.

The Jags, who started 12-0 and just recently lost by two points to 6A No. 1 Huffman for their first loss of the season, came in at No. 2 in the 7A standings behind only undefeated Fairhope (11-0).

It’s one of the Jaguars’ best starts in school history with head coach Chris Laatsch now in his third year, and it has quickly cemented them as a strong contender for the 7A title this year coming off an Elite-Eight appearance last year.

Other local 7A teams recognized were Thompson and Oak Mountain, who both enter with hopes of an area title this year and a deep playoff run.

Last year, it was Oak Mountain who made it to its first Final Four in school history, while the year before, it was Thompson making it to the Sweet 16 for the first time in years.

Currently, the two have shown some good but inconsistent play early in the season. But each has shown the ability to make it that far again.

Thompson earned a spot inside the top 10 with the ranking of No. 6 in the 7A standings after a 7-4 start, while the Oak Mountain Eagles were one of the first teams left out as a nominated team with a record of 9-4.

Competing in the same area, both will have a chance to prove themselves against one another, while they’ll also have to deal with No. 3 Hoover in one of the most compelling areas in the state this season.

Oak Mountain has also dealt with injuries and football players missing for much of the early-portion of the season, which likely won’t be as big of an issue come area play time in January.

In the 6A classification, the Calera Eagles have also shown the ability to be one of the top 10 teams in the state this season. The Eagles, who were 8-5 at the time of the rankings, earned the No. 7 spot in the standings.

All of their losses this season have come by seven points or less to other ranked teams, including a two-point loss to No. 1 Huffman in a game they led by double digits throughout.

With Duke Chambers currently nursing an injury as one of the team’s leaders, once he returns sometime during area play, the Eagles should take flight and be a strong championship contender.

The only other boys team inside the top 10 was Vincent, who is dealing with replacing four of its starting five from last year.

So far, the Yellow Jackets are 4-5, but under head coach John Hadder, who consistently takes teams to the Sweet 16, they should continue to grow. As for now, they’re the No. 9 team in the Class 2A standings because of the growth possibility.

Montevallo also received a nomination for a spot in the Class 4A top 10 due to the difficulty of the Bulldogs’ schedule.

With a 3-6 record now, they are still getting used to first-year head coach Keegan Bell, while all of their losses have come to higher classification teams aside from a loss to 4A No. 3 Dallas County.

In the girls rankings, two teams were ranked inside their respective top 10, while two others were nominated and just missed out.

In Class 7A, defending state champ Spain Park has played its usual difficult schedule so far and has managed to get off to a 10-4 start despite not having Miss Basketball Sarah Ashlee Barker, who is now at the University of Georgia.

The Jags are still trying to find the right balance of leadership and vocalization this year with her departure, but they’re a strong defensive team that can get hot from beyond the arc, giving them a chance in any game.

Currently, Spain Park sits at No. 5 in the standings, but Hewitt-Trussville and Vestavia Hills are a combined 24-2 this season as the No. 2 and 3 ranked teams both in the same area as the Jaguars.

The only other girls team ranked after a hot start to the season is Briarwood. Now at 7-0, the Lions look to have another team that could threaten this year despite a difficult area featuring Homewood, Chelsea and Mountain Brook.

The Hornets have now won eight games in a row after taking down Oak Mountain in their most recent game to improve to 9-2, while the Warriors are now 7-3 overall this season, showing drastic improvement in year two under head coach Marty Smith.