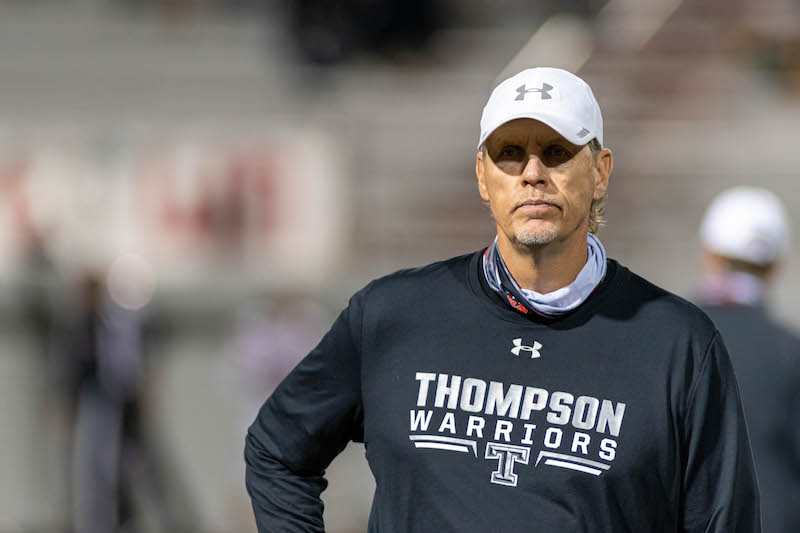 Thompson head coach Mark Freeman has been named the 2020 Shelby County Coach of the Year after leading the Warriors to a 14-0 season and second consecutive Class 7A State Championship. (File)

There is no denying what high school football coaches mean to young student athletes. From the impacts they make to the lessons they teach, it’s one of the most important jobs around to help mold young minds and that was even more evident in 2020.

Throughout a spring and summer that featured months of unknown, anxiety and stress in regards to the 2020 football season, as well as the chaos of scheduling and competing during the middle of a worldwide pandemic, this year, high school football coaches faced one of the most challenging tasks of all when they set out to lead their teams.

For that, each coach in Shelby County deserves praise for what they were able to accomplish during a historic football season in Shelby County as every team played the majority of their games.

While many had to deal with hiccups along the way due to COVID-19 causing cancellations, each coach kept their athletes focused and ready to comeback stronger than before.

That made it difficult to narrow down a 2020 Shelby County Coach of the Year.

Tom Causey led the Pelham Panthers to their third region championship in school history with a 6-0 region record and an 8-3 overall record.

In his second season, Briarwood’s Matthew Forrester led the Lions to an 8-3 record, a second-place finish in their region and a playoff win in their first year back in the difficult 6A classification.

And perhaps two of the most impressive seasons came from Helena’s Richie Busby and Montevallo’s Blake Boren.

Busby, who is in his third year, had to keep his team focused for three weeks of no playing due to COVID-19 and after a 2-2 start. But following those three weeks off, Helena came back to win three in a row to close out the regular season and finish second in the region, before the Huskies picked up a 22-19 playoff win against Carver-Montgomery.

And for the Montevallo Bulldogs and Boren, it was a slow 0-4 start and a season that featured four cancellations, but they bounced back to not only win six in a row to end the regular season, but upset St. James in the first round of the playoffs with a 27-21 overtime win.

All of those jobs were astounding and deserve endless credit, but Thompson Warriors head coach Mark Freeman was able to accomplish one of the rarest achievements in sports when he led the team to a second state championship in a row and a perfect 14-0 record to win the 2020 Shelby County Coach of the Year award. 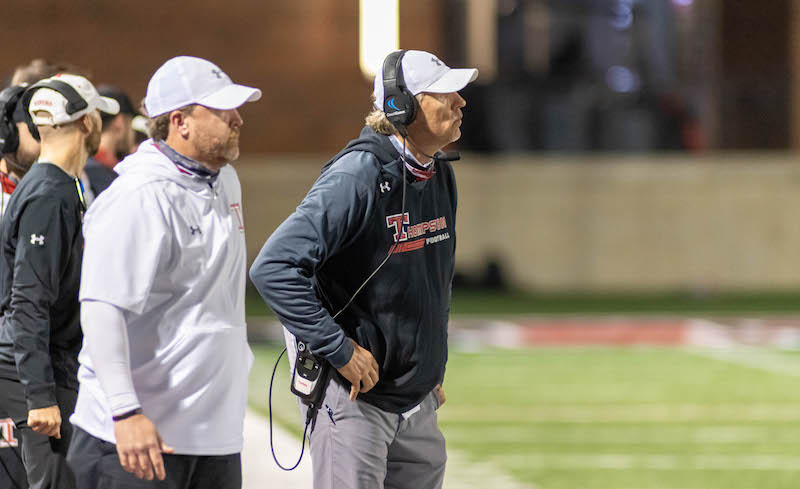 When Freeman arrived at Thompson, he took over a 0-10 team with the commitment of turning the Warriors into a championship team.

After back-to-back five win seasons to start his tenure, the head coach has now gone 49-4 in the last four seasons combined. That record includes four consecutive trips to the semifinals of the playoffs, three straight trips to the state championship game and now back-to-back state titles in 2019 and 2020.

And with those two title wins, he is now in a tie for second for most all-time state championships in the state with eight. He and four others, including Josh Niblett of rival Hoover, both trail Robby James’ record of nine by one championship win.

Freeman considers each of his titles an equal blessing but this year’s championship was admittedly different than the rest not simply because of the miraculous series of events in the final 30 seconds featuring a blocked punt returned for a touchdown, an onside kick recovery and a last-second field goal, but also because of the turmoil of this year.

And from an outsider’s perspective, it was not only one of his best seasons, but one of the best coaching jobs the state has seen in a long time.

Sure, he had the talent that can make any head coach look good, but with that talent comes challenges as well, mainly keeping the team’s focus in check—oh and during a pandemic.

After being forced to replace a 3,000-yard passer on his offense for the second year in a row and losing his top wide receiver with several young players on both sides of the ball, Freeman had to lead his team through a first—preparing to defend for a state championship through virtual offseason work. 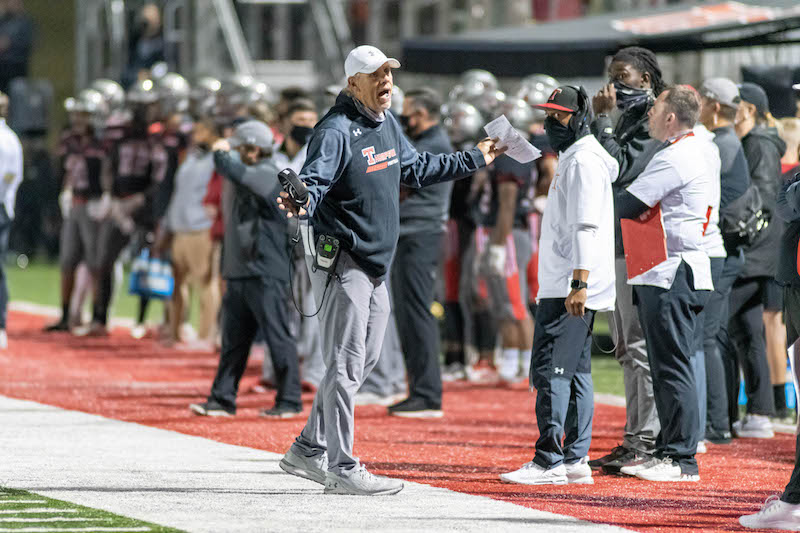 Players didn’t have coaches looking over their shoulders, which gave them much more freedom and could have made it easy for the Warriors to lose focus throughout the spring and summer, which are the key times of the year in preparing for the fall.

But early on, Freeman instilled the mindset that this year’s team was out to repeat as state champions and nothing else.

And his players bought into that mindset immediately.

The entire team knew they would get everybody’s best shot, but why play if they weren’t trying to at least match the effort of the year before and get to where every team wanted to be.

That led to players putting in the work at home, attending virtual meetings and studying to make sure they were going to be better than any team looking to knock off the defending champs.

Despite playing possibly the most difficult schedule in the state, including the No. 1 6A team on two different occasions and the second and third ranked Class 7A teams twice, Thompson averaged 43.1 points per game, gave up 15.9 points per game defensively and finished the season 14-0 for the second time in school history.

When you flash back to July and realize that we didn’t know if a season would even take place, nobody imagined any team could play every game on its schedule this season.

But Freeman and the Warriors not only did that, they won all of them.

We may not ever see a season where coaches mean more to players or players enjoy the game more than the 2020 season, and it’s likely Freeman will never forget what he accomplished with this year’s athletes because of the belief they had in him and one another.