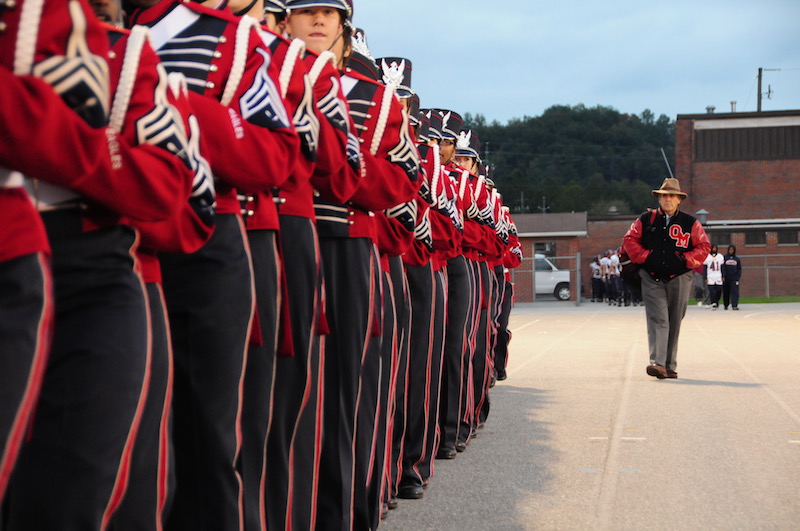 Even though he died on Nov. 5, Jim Duren’s legacy will always live on and he will always have a watchful eye on the bands at Mountain Brook, Pelham and Oak Mountain. (For the Reporter/Bob Fitzgerald)

It’s hard to watch anyone you love cry with sorrow, much less three loved ones at the same time. But sitting inside Hunter Street Baptist Church on Monday, Nov. 30, I watched my wife and her mother and father all shed tears at the loss of one man.

It wasn’t someone in their immediate family that they had lost, but he mine as well have been a part of their family. That’s the impact Jim Duren had.

Each year for 39 years as a band director, Duren added to his “band family,” featuring three different schools and thousands of students and their families.

My wife, who graduated from Oak Mountain in 2011 was one of them. In fact, she was the second to last band that Duren directed before announcing his retirement in 2012.

She always jokes that he knew it couldn’t get any better than her band, so that’s what made him finally choose to move to the next step of life. In actuality, she knows that was anything but the truth.

Duren, who graduated from Alabama and started his trek as a band director at Mountain Brook Junior High School in the 1970’s, was an influential leader that did his job because of his love for the students and no other reason.

He admittedly couldn’t think of a favorite band and definitely not a favorite person, because he cared for each of them so deeply.

After his band director had an influence on him in high school, Duren knew he wanted to have that same impact. He wanted to not only share his love for music with others, but his compassion for seeing others succeed.

And his love for them was evident by the way his students never forgot his impact.

At his celebration of life on Nov. 30, a few weeks after dying on Nov. 5, pastor Buddy Gray asked for those in attendance who knew Duren through band to stand.

Close to 90 percent of those in the room stood at that time.

“He loved you,” Gray said at that moment. “He didn’t do what he did for any other reason but his students.”

I was one of the few that didn’t stand at that point because I never met Duren. But through his celebration of life as well as my wife and her family, I feel like I do know him.

All you have to do is look at his 39-year career, his love for the Lord, his care for others and his passion to do what he loved while making sure to go out of his way to impact others to realize that Jim Duren is a man we should all strive to be more like.

Everybody was equal in his eyes, and he went out of his way to make sure each individual person felt loved.

His family didn’t stop growing when he retired in 2012, and his impact didn’t stop when he died on Nov. 5, that was just the beginning. Like the impact his band director had on him, he has had that same impact on others.

Now, his legacy will live on through those he impacted for so many years because they now want to be like Mr. Duren.