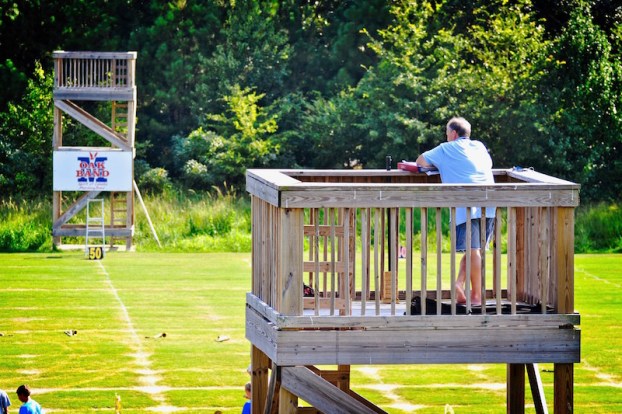 Former Oak Mountain and Pelham band director Jim Duren died on Nov. 5 due to complications from COVID-19, but his impact on so many in Shelby County will never be forgotten. (For the Reporter/Bob Fitzgerald)

Standing in front of so many faces he influenced over the years, he picked up his baton and began to conduct one final piece of musical harmony.

Carrying as much passion as he had for the last 39 years combined, Jim Duren rejoiced as former band students from Mountain Brook, Pelham and Oak Mountain came together for a night of celebration to create “Mr. Duren’s Opus Band” on May 20, 2012. Composed as always, he directed each of his band’s warmup song “Salvation is Created” emphatically for one last masterpiece.

As he stood in front of the special orchestra, he not only did his job one last time to perfection, but he made sure to scan the room and make eye contact with each student, knowing they had as much of an impact on him as he had on them.

On Thursday, Nov. 5, 2020, Duren died from complications of COVID-19, creating sorrow for many of those same students as well as many more, but also showing his legacy would never die because of his outlook on life and his impact on others.

Where it all began

Growing up in small-town Gordo, just outside of Tuscaloosa near the Alabama-Mississippi state line, Duren’s passion for music started in ninth grade at Gordo High School all because of one person. 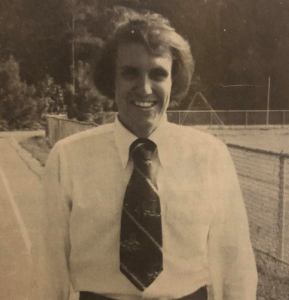 “It all goes back to your teachers, and fortunately for us, we came through Gordo High School when we had a teacher that was just a phenomenal musician and cared about us kids and was willing to do whatever he needed to do to have a band program,” Duren said in a 2012 interview with Cliff Brane.

And with that began Duren’s path to music.

At that time, Gordo’s band had approximately 16 students in it, but due to the passion for music and care for the students shown by the director, it quickly grew to 96 in his first seven years at a small high school that had less than 300 students.

“He never told us anything other than ‘You guys can do this.’ He never said you can’t do it, so we just assumed we were supposed to do it. Whatever he asked us to do, we were willing to do. He was a huge influence.”

Little did he or anyone else know at the time, Duren would be in a similar position to his first band director with the compassion he showed others, making them want to participate in band and look up to him one day.

On the right track

From the moment he fell in love with music in high school, he knew that was his future. With the impact his band director had on him, Duren’s sights were set on doing the same for students one day, and when it came time to move forward and attend college, he instantly made the decision to attend the University of Alabama.

“Coach (Paul “Bear”) Bryant. You can’t beat that,” Duren said of his decision to attend Alabama. “Being 20 miles from Tuscaloosa, that’s all you ever heard was about Coach Bryant and the Crimson Tide. As far as I was concerned, that was the only place I wanted to go to school.”

The second he stepped on campus, he was a music major and there was never any second guessing that decision.

In his time at UA, Duren became a student conductor in which he got to lead pep bands at different events such as pep rallies.

It also meant he got to lead the pep band at homecoming one year, and Duren got to stand next to Bryant himself, which was another inspiring moment.

“That has always been primo in my mind,” Duren said. “That’s really one of the coolest things I’ve ever done.”

It was another moment that made Duren realize the impact he wanted to have on people.

His time at Alabama also led to one of his favorite stories to tell and one of his most famous sayings.

Following the game, the band went to the Western Hills mall to drop those off who were staying in Birmingham at their homes. While there, Duren went inside to get a drink for the ride back to Tuscaloosa.

When he got back on the bus, his friend asked if he’d go back in to get a doughnut, so being the caring person he was he did, and made sure to tell his friend not to let the bus leave.

“She said, ‘I won’t, I’ve got it handled,’” Duren recalled. “I walked back out, and down the Bessemer Super Highway, I see seven charter buses driving down the highway.”

Duren was stranded in Birmingham with no money, so he just sat down on the curb and thought for a while he might have to sleep there. But he ended up finding a ride back with two other students who were driving down in their own cars.

When he got back and told band director Dr. James Ferguson, he just received a laugh. And that always remained one of Duren’s favorite stories, while also creating the lasting saying.

His impact begins and never ends

Duren’s path to becoming a band director began with a trip to Greenville, Mississippi. He traveled out there to see his cousin, who was in talks with the band director at Mountain Brook High School to become the junior high director. 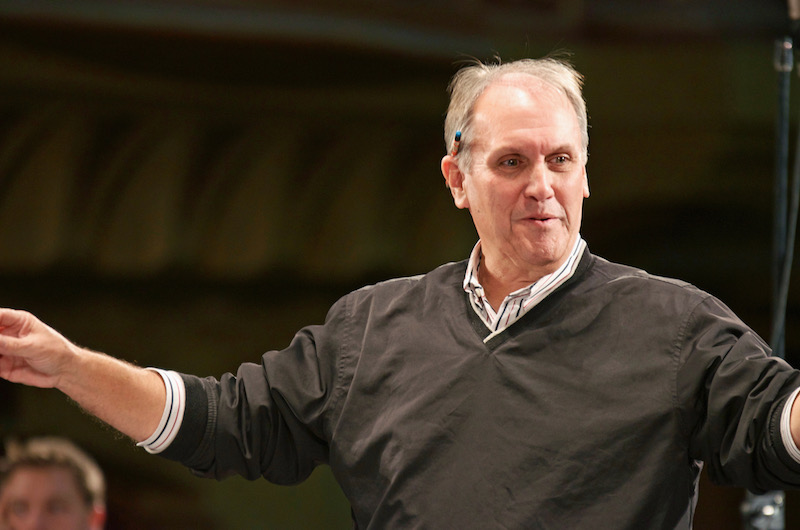 “While we were out there, he got a phone call from this guy, but he said he didn’t want to answer the phone because he didn’t want the job,” Duren said. “I asked, ‘Well, do you mind if I talk to him?’ I did, and as they say, the rest is history.”

That began one of the most legendary careers in Alabama high school band history.

That’s when Duren’s impact on Shelby County began. After serving MBHS, he took over as Pelham’s band director in February of 1987 where he served for the next 12 years.

Then, his baby came along.

In 1999, the opportunity to start a band program from scratch led Duren to the newly built Oak Mountain High School.

““When (my wife) Sharon and I moved into our house back in ’81, our desire and prayer had been from day one that there would be a school close that I could teach. That’s what we had been looking for. After the Pelham experiment turned out so well, when they started talking about building (Oak Mountain) it just seemed like a logical fit,” Duren said. “It was an opportunity to start a program from scratch, put everything in place and just watch it grow.”

And it grew into one of the most prominent music programs in the state and across the country.

Oak Mountain went on to become a powerhouse in competitions and put on magical shows and concerts for the next 13 years until Duren decided to retire in 2012.

But despite all of the praise he got personally for his success and the praise each of his bands got, that’s not what it was about.

Every step of the way, it was about his love for the kids and that was evident in his saying, “Love the kids first and all else will fall into place.”

When Duren took his future wife Sharon on their first date on April 1, 1973, the two went to play tennis, something she had never done before. But she had been praying for God to send her the right person, and her prayer was answered.

The two got engaged four months later in August and married shortly after in November, but at the time, Sharon didn’t know how big her family was about to become.

As Duren’s career grew, so did their family. Their band family, that is. 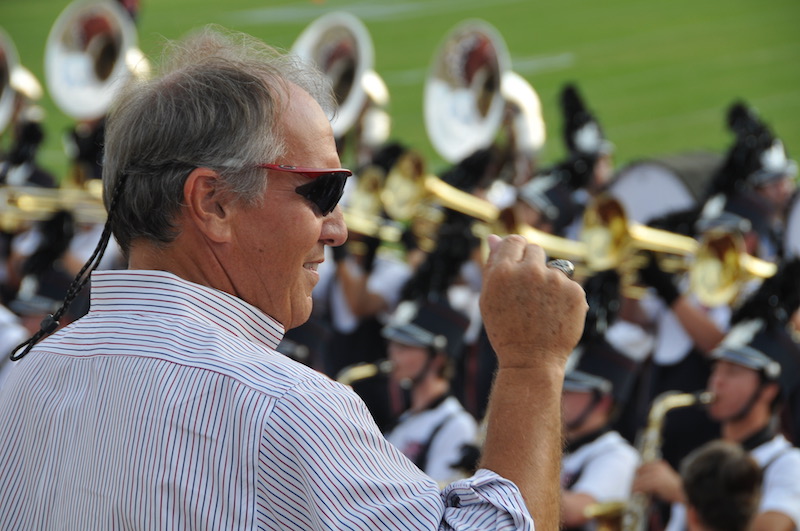 It wasn’t uncommon for students to come over and hangout with the Durens or ask for advice. He became like a father figure to them, and they were the ones who drove him.

During his celebration of life at Hunter Street Baptist Church on Monday, Nov. 30, Pastor Buddy Gray asked for all of those that were impacted by Duren in band to stand.

Close to 90 percent of the room stood with those who learned under him at all of his stops along the way there to show their support and remember what he had done for them.

“He loved you,” Gray said. “He didn’t do what he did for any other reason but his students.”

As much as he loved music, his commitment of being there for the students was first and foremost, and the ability to challenge them through music was an added bonus.

A day in the life of Jim Duren always featured an impact on someone, and that was because of the selflessness by which he lived. Now, he’s created a legacy that will last forever with many now continuing the same cycle he followed by getting involved in music to impact others.

If he were to look back on his years of life and the impact he had in a life well lived, many would tell you he would likely reflect with one of his favorite phrases featuring two simple words, “That’s awesome.”

By ALEC ETHEREDGE | Managing Editor It was remarkable. Many didn’t think it would happen, some tried to prevent it... read more