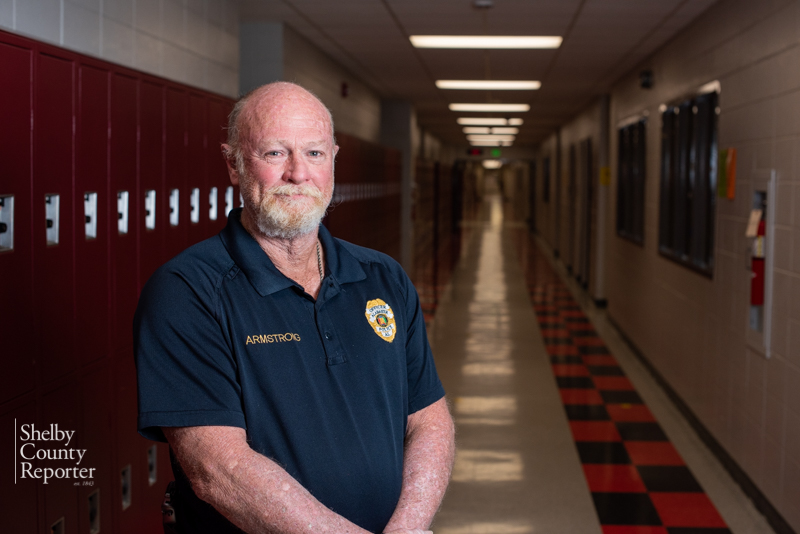 ALABASTER – What started as an interest in motorcycles led to a long and fulfilling career for Thompson Middle School’s Steve Armstrong. A mere 40 years ago, Armstrong began his career in law enforcement and is now set to retire with 14 years of being a school resource officer under his belt.

Armstrong is a graduate of Woodlawn High School and Jacksonville State University. After receiving his undergraduate degree, Armstrong returned to his hometown of Birmingham and began working as a police officer.

“My interest in police work for the most part was that I wanted to ride motorcycles real fast and get paid to do it,” Armstrong said. “I worked there for 20 years, and I was on the SWAT team for 11 years. I made lieutenant and worked at the west precinct for my last four and a half years. Then I became an SRO.”

Armstrong first started working for Alabaster in 2004. After his divorce, he had trouble finding time to see his son after work, which prompted him to find a position with more free time.

“I worked patrol here and rode a motorcycle here for a year, then was going through a divorce in 2006 and wasn’t able to see my son as much as I liked,” Armstrong said. “This position came open with open weekends, so I could see him more. I needed this job more than it needed me when it came available because I saw 1,500 kids every day and it filled a void in my life.”

Armstrong started as a School Resource Officer (SRO) at Thompson Middle School in 2006. At the time, the school was part of Shelby County Schools.

After a few years, however, Alabaster City Schools was formed.

“I started as an SRO at the middle school in 2006 and have been there ever since,” Armstrong said. “I was made a corporal over the SRO unit and over the years, hopefully the unit itself has changed for the better and become more professional and seen and involved in the community.”

Armstrong said he and the other SROs try to stay involved with the students and community of Alabaster by being present at local and school events. He added that he believes staying involved is best for police relations with the community.

“The six of us try to work every single afterschool event we have,” Armstrong said. “You may see one at an event or all six. I think even our elementary school SROs go to the games and events, and the kids recognize them. The more we are around the kids, the better for the community and police relations with schools and parents. That’s my belief anyway.”

Watching the school system transform over the last 14 years is something that Armstrong feels strongly about. Armstrong said Alabaster City Schools has displayed excellence and provided opportunities for its students in more ways than before.

“I’ve been here 14 years and the atmosphere and the pride and the community spirit and that kind of thing has grown,” Armstrong said. “Excellence was not part of it in the past, and I firmly believe ACS provides excellence for their students. Opportunity for them to excel and do good is here, and I’m very proud to have been a part of that, or at least included and around to see the transformation in this community. There are really good people down here.”

Armstrong’s last day on the job will be Jan. 28, and he will be officially retired on Feb. 1. Although Armstrong won’t be wearing his badge, he said he isn’t leaving completely.

“I’ve been offered a job with the Alabaster City School system, not as a police officer anymore, but still around the kids, teachers, principals and coaches that I’ve been around for years,” Armstrong said. “We’ve still got to meet about the job description, but it will be in the safety and security area for ACS. I will be around police officers; I just won’t be one. So anything I can do to contribute or whatever they ask, I will do my best. I may be retired from police work, but not from Alabaster.”