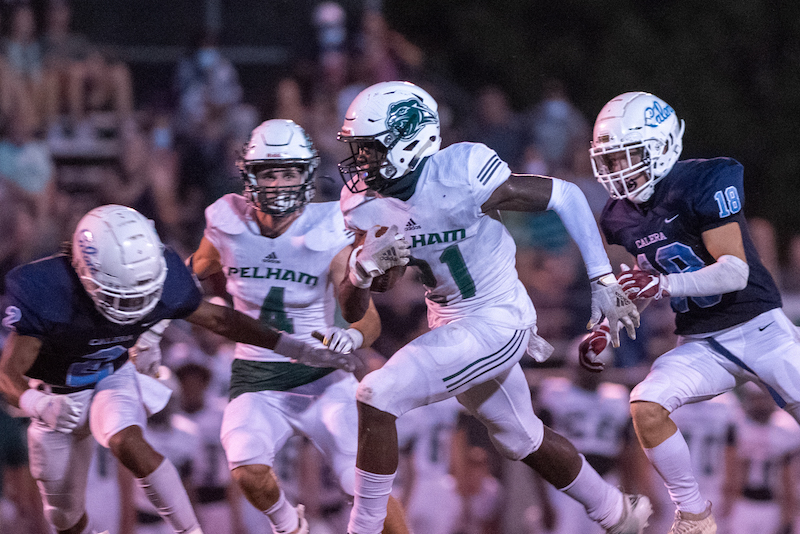 Pelham’s Walker Lyles had an interception and five tackles in the North-South All-Star game on Saturday, Dec. 19 in Mobile. (File)

MOBILE – It was a historic 2020 season for the Pelham football teams despite the turmoil of COVID-19, as the Panthers went on to win their third region championship in school history with a perfect 6-0 region record, and on Saturday, Dec. 19, two players showed why with All-Star performances.

Competing in the North-South All-Star game, Pelham kicker Salvador Jimenez and defensive back Walker Lyles both put together impressive performances to showcase their talent on Mobile.

Despite a 28-20 loss to the South team, both players capped off impressive senior seasons by making statements that they belong playing at the next level.

Lyles, who only played in five games this season, put up strong numbers for Pelham during the Panthers’ trek through the 2020 season. He finished the year with 15 tackles, three tackles for loss and 10 pass breakups defensively, while also playing three games on the offensive side and adding three catches for 48 yards and a touchdown.

But healthy and ready to showcase his ability, Lyles put together a strong performance in the All-Star game and finished as one of the game’s best defensive players.

Not only did he finish in a tie for fourth in tackles on the North team with five, but he added a tackle for loss, one pass breakup and one interception.

His interception also helped make the game interesting. Down 14-0, he was able to pick off a Karson Green pass to give the North the ball back early in the second quarter.

The offense then went on to score three plays later, followed by Jimenez’s first of two extra points in the game.

The North went into the half down 21-7 but bounced back late in the third quarter, followed by Jimenez’s second extra point of the night to make it 21-14.

That seven-point lead for the South held up until the final 2:30 of the game.

The North team scored with 2:20 left on a 3-yard touchdown run from Damien Taylor, his second of the half, to make it 21-20. But instead of going to Jimenez to kick the game-tying extra point, the North decided to go for the 2-point attempt and Taylor came up short leaving the score at 21-20.

After a defensive stop, the North team got one more chance, but a pick-6 with 19 seconds left sealed a 28-20 win for the South.

Jimenez finished 2-2 on extra points and had three kickoffs for172 yards, averaging 57.3 yards per kick.