Oak Mountain’s Bell voted 7A Coach of the Year 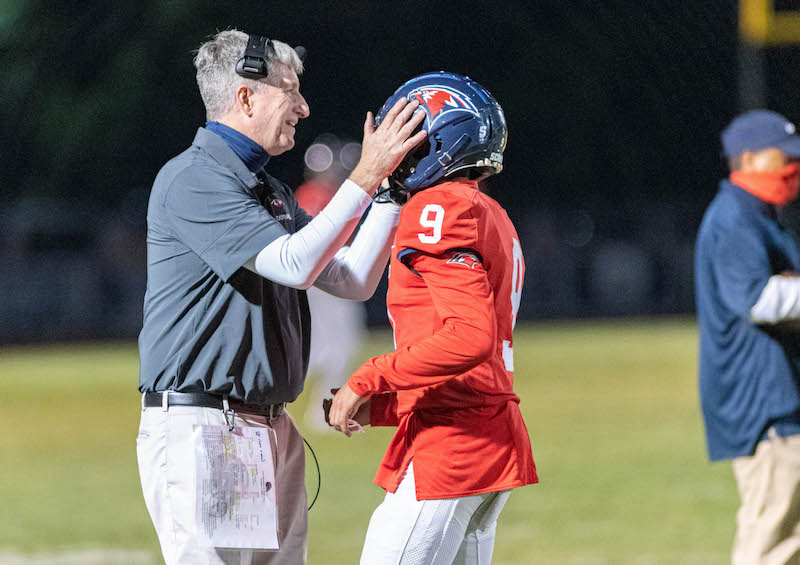 Oak Mountain head coach Cris Bell has been named the Class 7A Coach of the Year by the ASWA after leading his team to a historic season. (For the Reporter/Neal Wagner)

The 2020 season was one no coach in Shelby County could have prepared for. When preparing to lead young men on the football field, the furthest thought from their mind is what to do when a pandemic strikes.

But this year, that’s what happened, and not surprising, coaches across Shelby County handled the COVID-19 pandemic’s disruptions with admiration.

Coaches had to prepare for a season not knowing how many players they would have available on a daily basis, keeping up with contact tracing, not knowing if a game was going to happen and not knowing if the season would last more than a week or two if happen at all.

Yet, they led their teams virtually through the offseason and got their players prepared to compete and lay it all on the line each week of the season this year.

It was remarkable to watch, and while several local coaches did a tremendous job, one helped his team have a historic season amid the pandemic.

Oak Mountain head coach Cris Bell helped lead the Eagles to a 7-5 record this season and a trip to the second round of the playoffs in the difficult 7A classification.

Bell’s leadership during a historic and unique season led to him being honored by the Alabama Sports Writers Association on the All-State team as the Class 7A Coach of the Year. And the list of accomplishments this year made him more than deserving.

The Eagles got off to their first 4-0 start in school history and eventually started the season 6-1 overall.

Despite losing three in a row to Thompson, Hewitt-Trussville and Clay-Chalkville to close the regular season—three of the best teams in the state—Oak Mountain bounced back to upset Austin on the road in the first round of the playoffs by a final score of 41-28.

The Eagles then came within three points, 24-21, of knocking off Hoover for the first time in school history in the quarterfinals of the playoffs.

They were also on the wrong end of a questionable call in that game that prevented what could have been a game-winning drive deep in Hoover territory when the official spotted the ball further back than he originally had it marked.

All of that while dealing with a pandemic and competing in a region that featured the top three teams in the standings at the end of the year, including the state champion, as well as taking on two other ranked teams on their schedule.

It was a remarkable season for Evan Smith, Judah Tait and others on the offensive side, as well as players like Dean Null, Gavin Nelson and Zach Taylor on defense.

But what Bell was able to accomplish as the team’s head coach in getting them prepared not only for the season, but to compete in one of the most difficult regions was special to watch.

The Eagles looked well prepared each week and even pushed the best teams in the state, scoring some of the most points against Hewitt and Thompson while coming close to upsetting the Bucs in the quarterfinals.

It was a special season for the Eagles, and despite the loss of several seniors going into next year, Bell will return alongside Smith as the star quarterback, making the Eagles a threat yet again.