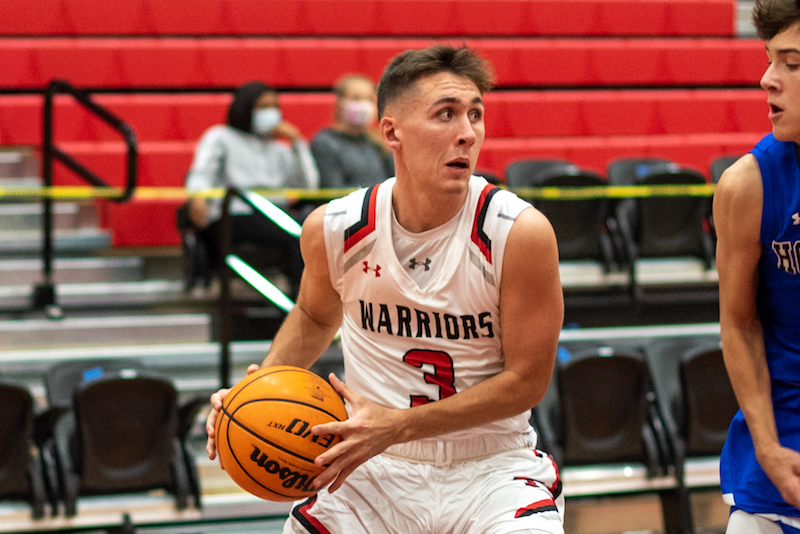 The Thompson Warriors put together a four-game win streak heading into their holiday break thanks to two recent wins against Montevallo and Jackson-Olin. (File)

The No. 6 ranked Thompson Warriors picked up their third and fourth wins in a row Friday, Dec. 18, and Monday, Dec. 21, as they built a good size lead and held off the scrappy Montevallo Bulldogs at home for a 53-41 win on Friday, followed by a dominant 61-39 win against Jackson-Olin on Monday.

With the four-game win streak, the Warriors improved to 9-4 going into the holiday break and will hope it carries into the second half of the season featuring area play.

“Overall, I was pleased with our effort, defensively,” Thompson head coach Dru Powell said after the Montevallo win. “To hold those guys to 19 in the first half and 41 for the game, I feel like that’s good defense from our team.”

That defense was victim to a hot start for the Bulldogs the from the perimeter, as they hit three of their first four 3-point attempts to go up 9-5. Senior Zach Holmes had two of those for Montevallo, who pressured Thompson full court for several turnovers.

The Warriors came into the game missing their leading scorer and starting point guard, Grant Hopkins, for multiple games and Steven Walker went down early with a rolled ankle. But multiple players stepped in and made a difference from the second quarter on.

The Warriors were aggressive to the basket and pounded the glass with Wesley Roberson and Brad Lewis, each picking up four points in the paint.

Lewis and his teammates grabbed nine offensive rebounds in the first half, while he led all scorers with eight at the break.

“We believed we could send a few guys to the boards tonight and have success and it was good to see us do that tonight,” Powell said.

His team outscored Montevallo 14-5 in the second quarter, including a 10-1 run to end it.

Thompson continued its balanced play in the third quarter as senior Jack Dorolek got rolling from deep and keyed a 9-0 run to start the period. He went on to score 11 of the team’s 13 third quarter points.

Dorolek also drew the night’s most difficult assignment on defense often guarding Michael Jones, who struggled to find his range throughout the night.

“Jack really got it going there in the third quarter. He’s expanded his game beyond being a catch and shoot specialist,” Powell said. “He’s a guy that can put the ball on the floor and score in a variety of ways.”

The Warriors reeled off another seven straight to start the final period and grew their lead to 15. Montevallo whittled it back down to eight on Jones’ final basket, but Lewis took over for Thompson scoring six more in the fourth to match Jones’ total.

The Bulldogs didn’t get any closer than 10 points the rest of the way. Lewis posted a season-high 16 points to go with 12 rebounds and two blocks.

Three days later, the Warriors traveled to Jackson-Olin and built off of that performance to close the year with a dominant 61-39 victory, as the team build back to full strength heading into 2021 and area play.

Dorolek finished as the team’s leader on both ends of the floor against the Mustangs, totaling 13 points, eight rebounds and two assists.