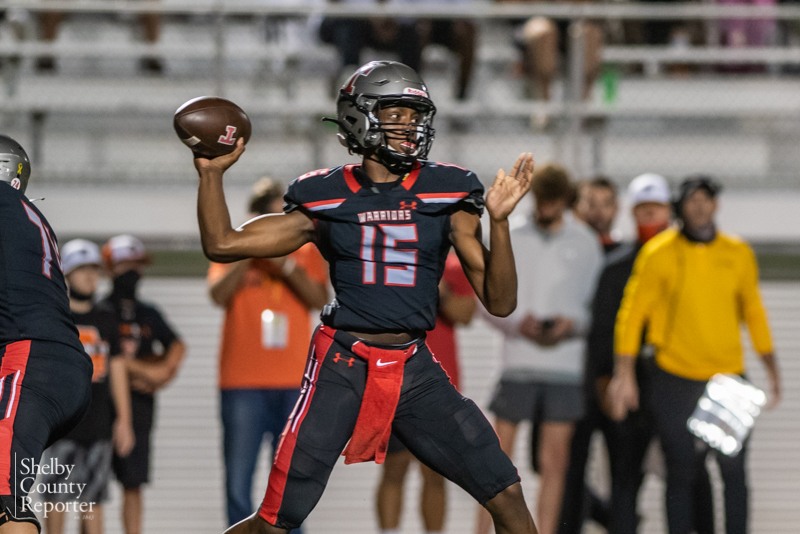 Thompson's Conner Harrell was one of 22 players from the county and eight players from Thompson to earn a spot on the All-State team. (File)

After a difficult season for many high school football players, it seemed more important than ever to reward the hard work put in throughout the year, and on Tuesday, Dec. 22, the state’s best players were honored on the 2020 All-State team.

This year’s team, which noted the best offensive and defensive players from each classification, included 22 players and one coach from Shelby County earning a spot as one of the best players in Alabama to step on the field this season.

That marked an increase of five athletes from last year’s total of 17, as this year’s group played every game like it could be the last, leading to some stellar play from incredible athletes.

Of those 22 to be named to the All-State team, eight were from Thompson and four were from Spain Park, while Oak Mountain, Helena, Briarwood and Montevallo all had two players named to the team and Chelsea and Pelham each had one player earn a spot.

Remarkably, Thompson had six of its eight players make the first team, while Briarwood’s Tyler Waugh was the only other player to earn a first team nod in any classification.

Starting in the 7A classification, all three teams from Shelby County had multiple players earn recognition, as well as one coach.

The Thompson Warriors paved the way with their six first-teamers, including Conner Harrell, J.B. Mitchell and Connor Howard on offense, as well as Jeremiah Alexander and Tony Mitchell on defense. Ryan Peppins also earned the position of first-team athlete.

Harrell totaled 3,405 yards and 40 touchdowns on 220-298 passing with just three interceptions this season, while also adding 315 rushing yards and five touchdowns on the ground.

Mitchell and Peppins both surpassed 1,000 yards receiving. Mitchell was the county’s leader with 1,163 yards with 12 touchdowns, while Peppins finished with 1,037 yards and 12 touchdowns.

Howard was the anchor of the offensive line, while Alexander and Mitchell were two of the best defenders in the state.

Alexander totaled 106 tackles with 29 for loss and eight sacks, while Mitchell posted four interceptions in the secondary.

On the second team, offensive lineman Anthony Butler earned a spot after a strong season, while Kobe Stewart earned an honorable-mention nod after a special senior year on the defensive line.

While the Spain Park Jaguars didn’t have anyone make the first team, the Jags had four total make the All-State team, including two on the second team and two as honorable mentions.

Cooper Kelley earned a spot after totaling 1,002 receiving yards this season with a county-high 14 touchdown receptions.

Drake Tabor also joined him on the second team after finishing 37-42 on extra points, while making three of his five field goals with a long of 42 yards.

In addition to those two, junior quarterback Bennett Meredith and junior receiver Jaylen Ward both made honorable mention. Meredith finished the year with 3,106 yards passing for 24 touchdowns, while adding 111 yards rushing with six interceptions.

One of his favorite targets was Jaylen Ward who 876 yards and five touchdowns this season.

Oak Mountain was highlighted by quarterback Evan Smith, who earned the spot of second team quarterback, while teammate Judah Tait was an honorable mention player.

Smith totaled 1,719 yards on the ground to lead the county in rushing this season and also had the most rushing touchdowns with 23. He also added 620 yards passing and six touchdowns with one receptions for 44 yards and a touchdown.

Tait was actually the county’s leader at running back, finishing with 1,412 yards and 12 touchdowns as a senior.

In addition to those two players, head coach Cris Bell earned the Class 7A Coach of the Year honor after leading the Eagles to one of their four best seasons in school history.

In the 6A classification, Briarwood and Helena both had two players make the All-State team.

The Lions were led by Waugh on the first team after he totaled l90 solo tackles and 75 assisted tackles, including 7.5 for loss and 1.5 sacks Waugh was one of the most mesmerizing players to watch. He also added three interceptions defensively and played on both sides of the ball, running for 257 yards and 13 touchdowns out of the wildcat offense.

Teammate Luke Reebals also earned praise by being named to the second team as a running back. He finished 2020 with 1,149 yards and seven touchdowns rushing the football, while adding 499 yards and two touchdowns receiving.

He earned a spot on the second team offense, while teammate IceBerk Cave finished the season with 107 total tackles and nine tackles for loss to earn the position of second team linebacker.

Also in Class 6A, Chelsea’s Chandler Pruitt and Pelham’s Dylan Peterson both made the team.

Pruitt was named to the second team as a linebacker following 122 tackles this season, while Peterson finished the year with 1,305 rushing yards and 15 touchdowns for an average of 9.1 yards per carry.

The Montevallo Bulldogs were the final team represented as they had two players make the team in Class 4A.

Both made the second team as Kial Cottingham was named a second team defensive back, while Joseph Anderson earned a second-team athlete position.

It was a special season for all 22 of the athletes, and a special way to cap off all of the hard work.