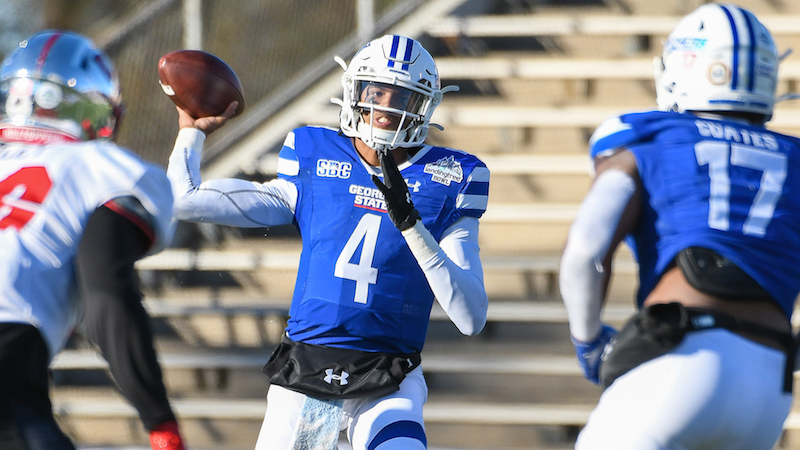 Former Calera quarterback and current Georgia State quarterback Quad Brown recently led the Panthers to a 39-21 victory in the LendingTree Bowl and won the MVP award in the process. (Contributed/Georgia State Athletics)

MOBILE – At Calera High School, the sky seemed to be the limit for quarterback Cornelius “Quad” Brown IV after throwing for 2,334 yards and 25 touchdowns during his junior season, but after an injury-plagued senior season, there was much left up in the air.

On Saturday, Dec. 26, however, Brown completed his first season as a starter at Georgia State University and put to rest any doubt anyone had in him competing at the next level when he led the Panthers to a 39-21 victory against Western Kentucky and won the game’s MVP award in the process.

During the game, Brown threw for 232 yards and three touchdowns through the air, while adding 40 yards on the ground to help Georgia State take the LendingTree Bowl and post back-to-back winning season for the first time in school history.

The game started shaky for Brown and the Panthers, who had close to three weeks off entering the game. It led to a stagnant first two drives from the offense, including a three-and-out ad an interception from the redshirt-freshman quarterback on third-and-goal from the 7-yard line.

But after falling behind 7-0 early, Brown led Georgia State on four consecutive scoring drives and 27 unanswered points as the Panthers stormed in front for a 27-7 lead at the half.

“After that first interception, I knew we would get to rolling,” Brown said. “Whenever you have guys like Sam Pinckney, whenever you got guys like Cornelius McCoy, we’ve got two great tight ends in Roger Carter and Aubry Payne. They picked me up. They made sure I never hung my head. I knew guys would make plays, and I just knew if I did my job as far as distributing the football, then I knew somehow, someway we would break open and that’s what we were able to do.”

Head coach Shawn Elliott could see the anxiousness from the team on the first two drives, and said after the game that he knew they just needed to take what was given to them.

“We started the game off and man I was hot. I was hot early,” Elliott said. “I told him ‘You can’t win the game with one play. Let’s take what we can get.’ And he came back and just delivered a masterful performance there.”

GSU went on to knock through two field goals and a touchdown in the second half, while giving up just 14 more points en route to the 39-21 victory.

It was a special moment for the quarterback to come back to his home state and pick up a win.

“It’s enjoyable coming back to Alabama, my home state,” Brown said. “Playing in familiar territory, I get a little confidence boost. It gets me going and gets me fired up. It’s an edge I use to my advantage.”

The win not only capped off a 6-4 season for the Panthers, but marked an impressive first year of college football for Brown at the quarterback position.

Brown finished the season 2,278 yards and 17 touchdowns through the air with 10 interceptions. He also added 301 rushing yards with an additional seven touchdowns on the ground.

It’s something Elliott and those who watched him compete in high school aren’t surprised by.

“We knew all about Quad. Probably everyone outside of here did not,” Elliott said. “We knew he had a big, big future ahead of him. We knew it was going to be a roller coaster ride of sorts. The ups and downs of learning. There’s going to be failures and successes with learning, but ultimately there’s going to be more of those successes than failures.”

Nonetheless, Brown has his sights on improving and what the future could bring with his improvement and the return of several playmakers around him.

“Personally, I continue to make leaps and bounds as far as taking care of the football is concerned,” Brown said. “It makes my job easy having so much talent around me. I just know if I can distribute the ball and get the ball to the open man, then we’ll be good. I feel like the sky is the limit for this offense, especially with having so many guys coming back.”

And while his future might have been uncertain following his senior year, he is now the leader of the Panthers and the future looks very bright.

“He had an exceptional night. I’m really, really proud of him. I told him, I said, ‘Gah, the sky is the limit for us, with you, let’s learn and let’s make sure we go and put the next step in. Let’s be the best we can be.’ I love Quad to death, and I’m glad he’s here at Georgia State and I’m glad he’s leading our football program.”