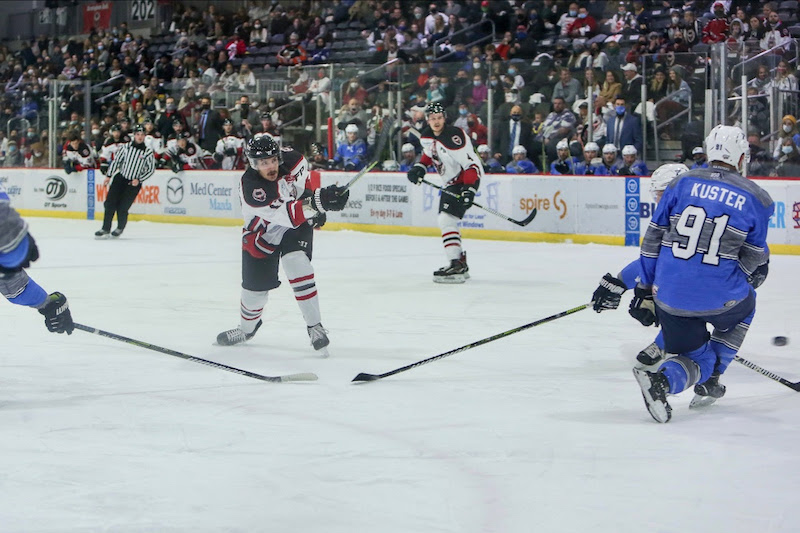 PELHAM – Despite building a 3-0 lead in the opening period to the new 2020-2021 Southern Professional Hockey League, the Birmingham Bulls couldn’t overcome a comeback attempt against the Pensacola Ice Flyers on Saturday, Dec. 26, dropping the game 4-3 in overtime.

Taking the ice inside the Pelham Civic Complex, Birmingham got off to an ideal start thanks to goals from Taylor Pryce, Alec Baer and Tanner Froese in the first nine minutes of the game.

But Pensacola’s defense improved after that and didn’t relinquish a goal the rest of the game, while Ice Flyers goalie Jake Kupsky saved every shot he faced the rest of the way, including 15 in the second period.

Alec Hagaman put Pensacola on the board with 4:50 left in the opening period to cut the Birmingham lead to 3-1 moving into the second period.

Both teams put together strong goalkeeping in the period with the first 18 minutes going by scoreless despite a combined 26 shots in the frame.

But with 1:21 left to play in the period, Jordan Ernst pulled the Ice Flyers to within one point with his first goal of the night to make it 3-2 heading to the third.

This time around, Pensacola didn’t waste time. The Ice Flyers capitalized on a quick power-play opportunity when Hagaman posted his second goal of the game off Nick Neville’s second assist as well as an assist from Garrett Milan.

The rest of the third period went by scoreless, as the Bulls couldn’t find the same success offensively that they had in the first nine minutes of the game.

They only put nine shots on goal in the period, while the Ice Flyers were able to put pressure on with 15.

That continued into overtime, as the Bulls only got one shot on goal in the extra period.

Pensacola, however, found early lanes and put three quick shots on goal, leading to the game-winner from Daren McCormick 2:20 into overtime.

Despite the loss, Birmingham still picked up a point in the opener, while the Ice Flyers picked up two points and moved to 1-0 on the season.

Austin Lotz saved 37 of the 41 shots he faced in the game in goal for the Bulls, while Kupsky saved 31 of the 34 he faced, only allowing those three early goals.

The Bulls were led by Brendan Soucie and Froese with two points each. Soucie posted two assists, while Froese added one goal and one assist.