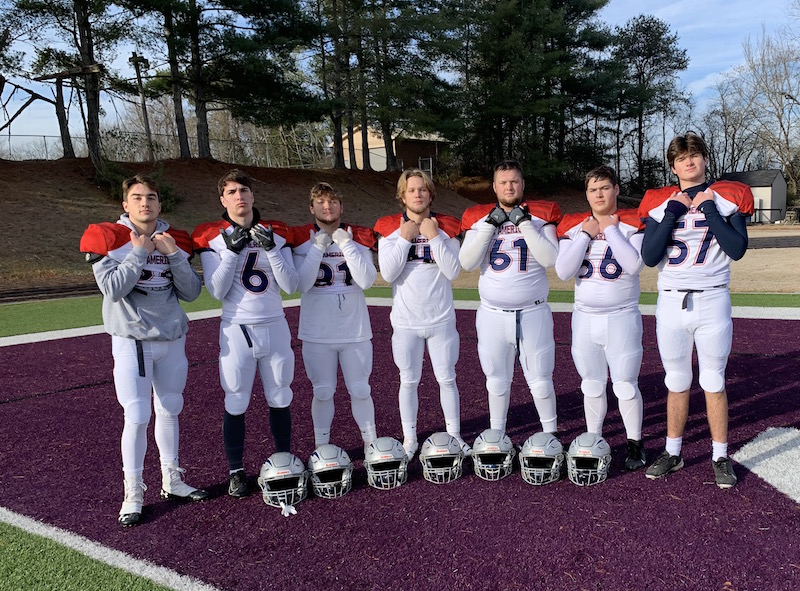 Evangel had seven players compete in the 2020 All-American Bowl in Gatlinburg, Tennessee on Saturday, Dec. 19. Their team, the Stripes, went on to win 47-0. (Contributed)

The 2020 football season didn’t begin like a regular season for the Evangel Lightning but it ended the same as the last two seasons—with an 8-man National Championship.

Despite battling COVID-19 throughout summer workouts, dealing with canceled games during the regular season and head coach Tim Smith losing his first 8-man game at the school to Ezekiel, the Lightning persevered and only had that one blemish en route to getting revenge against their rivals in the national championship game.

Ezekiel won that first bout between the two after scoring 28 points in the first quarter, which gave the Knights the ACSC State Championship this year.

But after beating another 8-man powerhouse, the Tennessee Heat, for the second time in the semifinals of the national playoffs, the Lightning earned a rematch with Ezekiel in the national championship game.

Evangel fell behind early again after giving up 13 points in the opening quarter, but this time around, the Lightning locked down defensively and didn’t give up a point over the final three quarters to pull away for a 40-13 win in a game that was tied 13-13 at the half.

And following that special end to the season, seven of Evangel’s players got the opportunity to compete in the 2020 8-man All-American Bowl in Gatlinburg, Tennessee.

Offensively, several players made an impact, but the biggest impact came on the defensive side of the football as the Lightning posted a shutout in a 47-0 win.

The final two points of the game came from this year’s AISA/ACSC Player of the Year in Shelby County Jett Lodge. On a fumbled snap, he came off the edge and tackled the opposing running back in the end zone for a safety.

That was one of many big plays from Lodge, Dylan Weathers, Timothy Howard, Daniel Viles, Jared Warren, Zach Chandler and Caleb Lumpkin in the game.

They were also led by their head coach Tim Smith, who was joined by assistant Hagan Joiner during the game to cap off a special year together.

There were more than 200 players nominated to play in the game this year and it featured players from across the country, including states such as Georgia, Tennessee, Oklahoma, North Carolina and South Carolina.

It was open to any homeschool or private school in the country with there being both an 8-man and 11-man game.