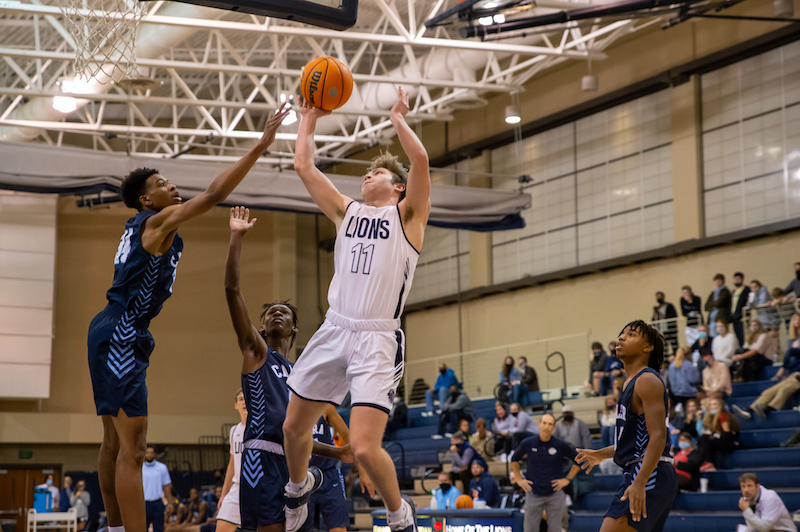 NORTH SHELBY – It has been an up and down early portion of the 2020-2021 season for the Briarwood Lions, but one aspect has remained consistent against a difficult schedule and that’s the scoring of Landon Nuyt.

On Tuesday, Dec. 29, the senior, who is averaging 22 points per game, scored 24 points to lead the Lions to 57-51 win against John Carroll. Nuyt has now scored 24 or more in six of Briarwood’s 13 games this season.

It was a big win for the Lions, who are now 6-7 and have been hovering around .500 all season.

The victory came despite a somewhat slow start on the offensive end in the opening quarter, but the defense came prepared during the first eight minutes of play.

Offensively, the Lions made five field goals, including one 3-pointer apiece from Brooks Donnelly and Nuyt, which was more than enough for an early advantage after the defense gave up just seven points in the quarter.

John Carroll only made three field goals, one of which was from beyond the arc.

That ended up being Briarwood’s best defensive quarter of the game, as the Cavaliers scored 14 or more in every quarter the rest of the way, but that’s also when Nuyt caught fire.

In the second quarter, he knocked down one 3-pointer and four other field goals for 11 points to finish the first half with 16.

He was also joined by Stratton Ponder and Donnelly, who were also on fire from deep. Donnelly added his second three of the game and went 2-2 from the free throw line in the quarter, while Ponder knocked down two from beyond the arc.

Those three helped Briarwood score 24 points in the quarter, which outscored John Carroll by 10 points and gave the Lions a 36-21 lead at the break.

The Cavaliers, however, made halftime adjustments, and Briarwood never found that same touch from the field in the second half.

In the third quarter, the Cavs drained four 3-pointers to score 16 points in the period, while the defense held the Lions in check. Nuyt only scored one basket, while Will Brewer kept Briarwood in front with his five points in the quarter.

John Carroll’s new effort helped the Cavaliers battle to within eight points at 45-37 going to the final quarter.

Their uphill climb continued into the final quarter, but Briarwood’s big second quarter became too much for them to overcome in the end.

Despite some free throw struggles in the fourth, Nuyt made both of his in addition to two other field goals to help make the difference down the stretch to finish off the six-point victory.

Aside from Nuyt’s game-high 24 points, Donnelly finished the game with 12 points and went a perfect 4-4 from the free throw line, while John Elliott and Ponder both added seven points.