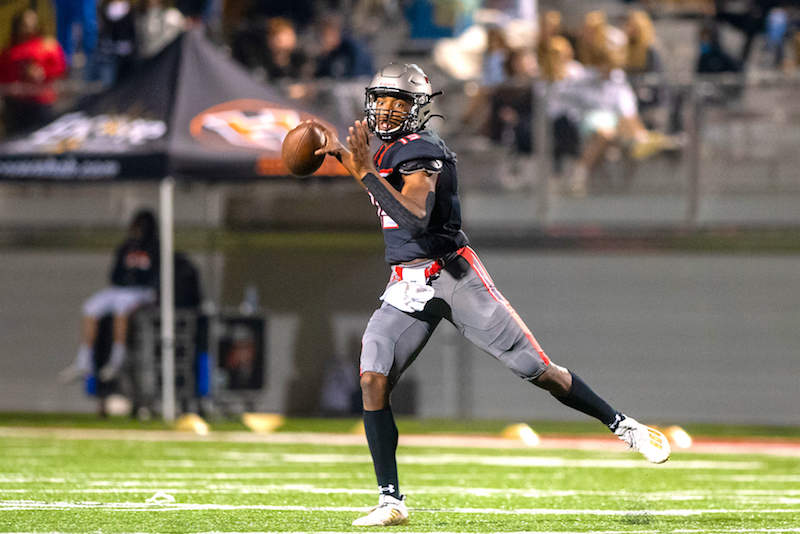 Thompson quarterback Conner Harrell will look to bring home the Back of the Year award for the Thompson Warriors for the fourth consecutive year. (File)

The Thompson Warriors have already repeated as state champions after a remarkable 2020 high school football season, and now they’ll be hoping to see another repeat performance.

Both are possible after the ASWA released the finalists for each award on Tuesday, Dec. 29, which included Thompson quarterback Conner Harrell and linebacker Jeremiah Alexander.

Taulia Tagovailoa won both his junior and senior season at Thompson, while Pate came in last year and put together a magical state championship season for the Warriors to keep the tradition going.

Pate followed those two seasons up by coming in to start for one season and throwing for 3,125 yards and 41 touchdowns.

Now, Harrell will look to bring home the award yet again, and he should have a great shot.

Not only did he throw for 3,405 yards and 40 touchdowns this season, but he completed 220 of his 298 passes with only three interceptions in a 13-game schedule against the state’s best teams.

He also showed a strong level of elusiveness and added 315 yards and five touchdowns on the ground.

His competition for the 7A Back of the Year award is Hewitt-Trussville running back Armoni Goodwin and Central-Phenix City running back Joseph McKay.

Not only do Harrell’s stats make him a strong candidate for the top 7A back, but also a contender for the state’s Mr. Football award despite other talented players like Oxford’s Trey Higgins and Pinson Valley’s GaQuincy McKinstry. 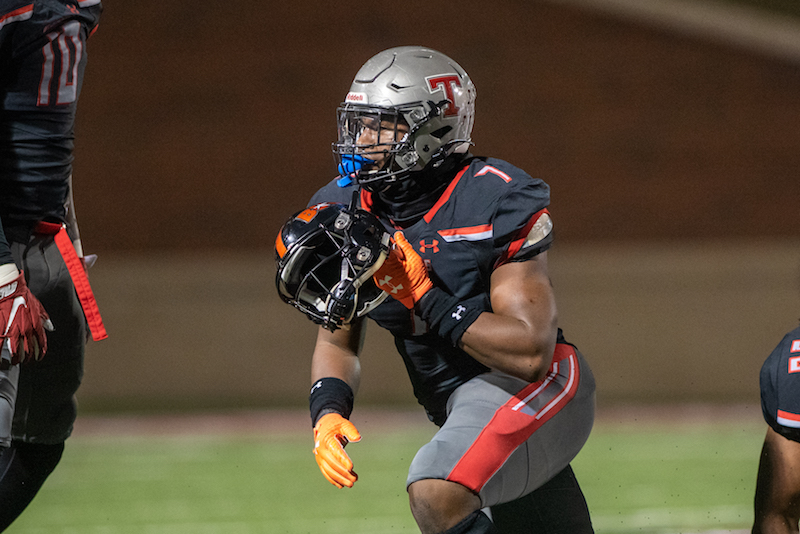 Thompson linebacker Jeremiah Alexander has been named a finalist for the Class 7A Lineman of the Year award for the second consecutive year. (File)

Joining Harrell as a strong contender for the top player in the state will be Alexander.

A teammate of Harrells on the state championship team, Alexander was named this year’s player of the year in Shelby County due to his dominance on the defensive side.

He finished the season with 106 total tackles, including 29 tackles for loss and eight sacks, despite defenses knowing where he was at all times and often double teaming him.

Alexander’s speed, ability in coverage, and most importantly his strength and physicality to run through defensive lineman and make big hits on quarterbacks and running backs was jaw dropping.

It’s the second year in a row Alexander has been named a finalist for the Lineman of the Year award after earning that recognition last year thanks to posting 118 tackles, 25 tackles for loss and 8.5 sacks.

Joining him as finalists are Terry Kirksey of Baker and Ian Jackson of Prattville.

Alexander should have a good chance to win this year’s award, while he and Harrell could make it a clean sweep in Class 7A for the Warriors, which would give them the best player on both sides of the ball from the 2020 season.

Normally, there would be an awards ceremony in Montgomery to celebrate the nominees and announce the winners, but this year’s plan on how to do so still hasn’t been announced.

Winners are usually announced before the end of January, which means a plan should be in place soon.