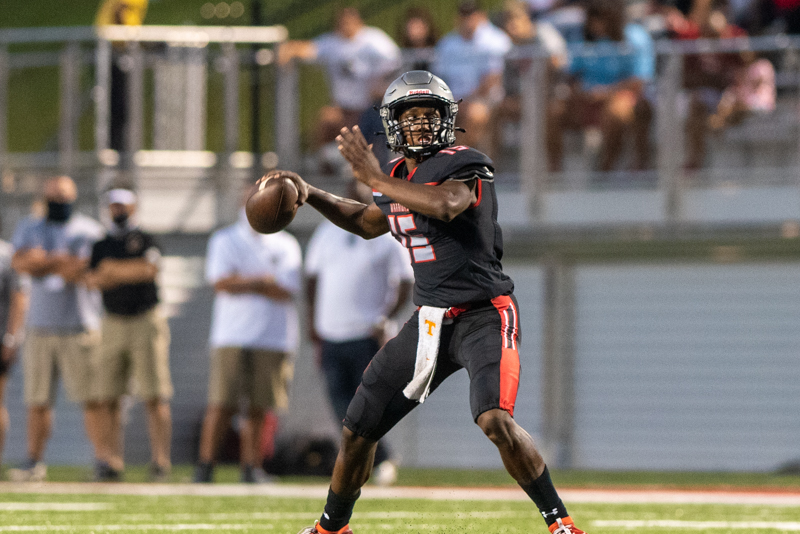 Thompson quarterback Conner Harrell committed to the University of North Carolina on Sunday, July 4 after a special junior season that featured more than 3,500 yards and 40 touchdowns through the air. (Reporter photo/Keith McCoy)

The recognition continues to pour in for Thompson juniors Conner Harrell and Jeremiah Alexander.

After leading each side of the ball for the 2020 Class 7A State Champions, both have previously earned praise as All-County and All-State players; now both have been honored as two of the best players in the state.

On Tuesday, Jan. 5, Harrell earned the honor of winning the Class 7A Back of the Year award as the top quarterback or running back in the classification this year, while Alexander was named the Class 7A Lineman of the Year from the linebacker position.

Remarkably, it marks the fourth consecutive year that a Thompson quarterback has won the Back of the Year award with three different quarterbacks winning each of the last three years.

Taulia Tagovailoa won for his efforts during the 2017 and 2018 seasons, while Sawyer Pate won the award last year after leading the Warriors to their second state championship in school history.

While nobody knew what to expect from Harrell coming into the season as a junior quarterback with the task of replacing those two dynamic starters, he and the coaching staff knew what was possible.

Harrell quickly flashed his ability to both run and throw the ball early in the season, but most importantly showed the ability to extend plays the entire season.

That, combined with his athleticism, speed, strength and touch, led to the junior throwing for 3,405 yards and 40 touchdowns. He completed 220 of his 298 passes with only three interceptions in 14 games played. Harrell also ran for 300-plus yards with five touchdowns on the ground this season.

As just a junior and with one of his top targets in Ryan Peppins coming back next year, Harrell should be one of the best in the country going into the 2021 season, especially under head coach Mark Freeman, who continues to help quarterbacks progress. 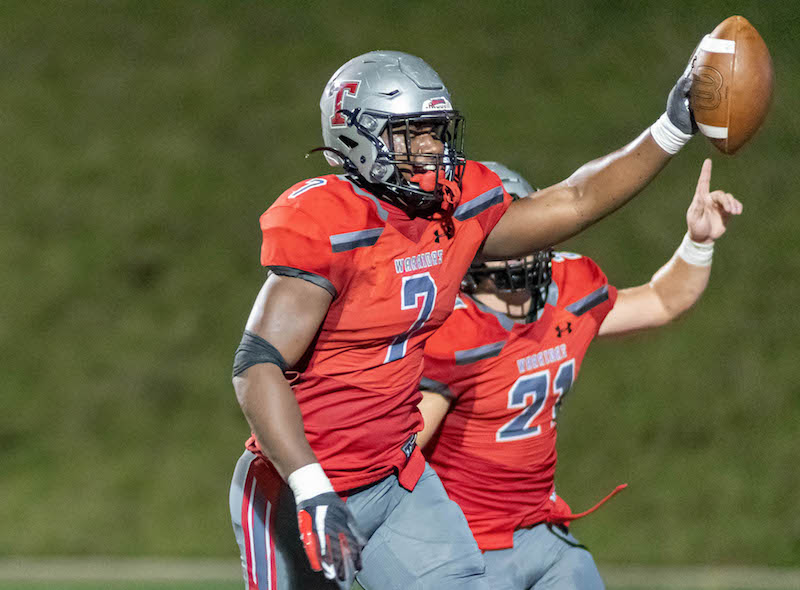 Thompson linebacker Jeremiah Alexander earned this year’s Player of the Year award in Shelby County after totaling 29 tackles for loss this season for the state champion Thompson Warriors and has now been named the 7A Lineman of the Year. (File)

Alexander, whose sole focus coming into the season was playing for his teammates and helping the Warriors repeat as state champions, was nominated as one of the three finalist for the award last year but came up short.

But after a spectacular season for the Warriors this year, which included his ultimate goal of repeating as a state champion, Alexander did more than enough to win the award this year.

He finished the season with 106 total tackles, including 29 tackles for loss and eight sacks, which earned him the county’s Player of the Year award as well as spots on the All-County and All-State first teams.

But during his junior season, Alexander was tasked with more responsibility taking on more of a role as a linebacker rather than the defensive line, meaning he had to read coverages in addition to wreaking havoc in the backfield.

The two standouts are not only the two best 7A players, but will now have a strong chance at being named to the Super All-State Team next week and the Mr. Football Award, which will be announced the week after.