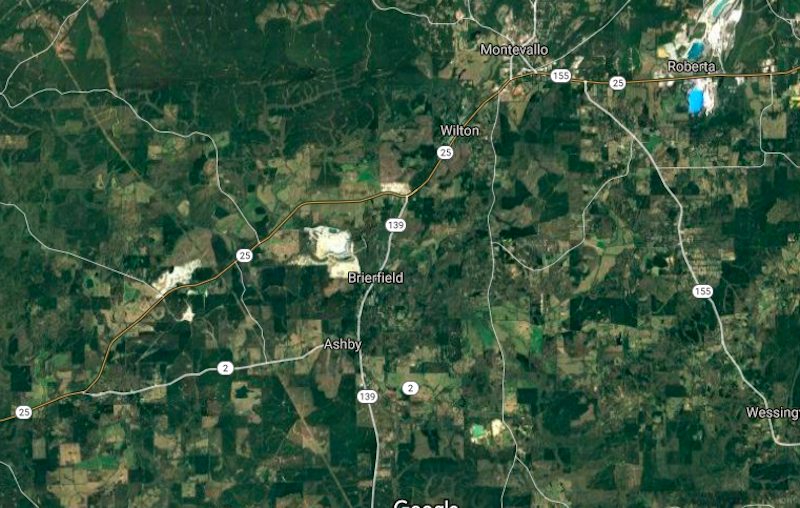 A new state prison is planned for the Brierfield area near the intersection of Bibb County 2 and Alabama 139, just minutes from Montevallo and Wilton, which is raising questions for many in those communities. (File)

Plans for the construction of a new state prison in the Brierfield area have raised questions among residents and local leaders as they wait for more project details to be released.

Last September, Gov. Kay Ivey announced the Alabama Department of Corrections would be entering into negotiations with developer teams for the construction of three new prison facilities at proposed sites in Bibb County (in Brierfield, which is located near Montevallo and Wilton), Elmore County and Escambia County.

The potential effects on Brierfield and surrounding communities of building a prison to house an estimated 3,100 inmates remain unclear, but citizens have expressed concerns related to water and sewer services and overall environmental consequences for the area.

Among the more vocal citizens opposed to the project is Chris Nelson, a member of the Block the Brierfield Prison group who has attended and spoken on the issue at city and town council meetings in Bibb, Shelby and Chilton counties.

“There is not much transparency about the plans for the project,” Nelson said.

Nelson said his next stop will be at the Jan. 5 Wilton Town Council meeting, where he plans to ask the mayor and council members if the town has made arrangements to provide water services to the proposed prison and if it would affect the quality of service the town offers to water customers in Wilton and surrounding areas.

According to Wilton Mayor Jessica Martin, the town has not been involved in discussions or received updates from project officials regarding the prison.

“We have not been in talks with anybody,” Martin said. “It would be nice to know what’s going on, but we’re in the dark just like everyone else is.”

Montevallo Mayor Rusty Nix said no one with the project or ADOC has been in contact with Montevallo, either.

“If they’re going to build the prison, they’re going to need water and sewer. As we’re set up now, there’s no way we could supply that,” Nix said. “When you’re talking 3,100 (inmates) plus support staff, you’re looking at 3,500 people. That’s half the size of Montevallo.”

Martin said her suggestion to those who are concerned about the project and its possible effects on water is to contact Ivey’s office or the Bibb County Commission office since the proposed Brierfield site is located in Bibb County.

“I know that it’s a concern for people, but I will do everything in my power to protect the citizens of Wilton and the outlying water lines we provide to Chilton and Bibb counties,” Martin said.

“Given the failing state of the ADOC’s existing infrastructure and that the department already is faced with more than $1 billion in deferred maintenance costs alone, pursuing new construction without raising taxes or incurring debt is the fiscally sound and responsible decision,” Ivey said.

State Rep. Russell Bedsole, who represents House District 49 that includes portions of Shelby, Chilton and Bibb counties, said the governor’s proposal is to use funds allocated to the ADOC to build the new prisons and enter into lease agreements with private developers, meaning the state will not own the facilities or land on which they are built.

The ADOC will handle operations at the facilities, but the developers will be responsible for any structural maintenance needed during the lease term.

“The buildings themselves will not be owned by the state,” Bedsole said. “This is why your representatives and your state senators are not being asked for input on this plan.”

Bedsole said he is a proponent of new prisons in Alabama and believes the state could do much better in how it incarcerates convicted individuals; however, he is concerned that, because the terms of the lease agreements with private developers will not be made public until they are signed, he and other representatives will not have time to preview their potential financial effects on the state.

Bedsole said he questions the long-term financial viability of the proposal and how the state will afford lease payments to occupy the buildings for the next 20-30 years with increasing maintenance costs and overall inflation.

“We’re paying into a lease, but we will never own that building,” he said. “We have no interest in the building itself.”

Bedsole said he received word from the governor’s office that the terms of the lease are still being negotiated, but a time frame for when they will be signed is unknown.

In addition, he said he was told no work was being done yet at the proposed Brierfield site.