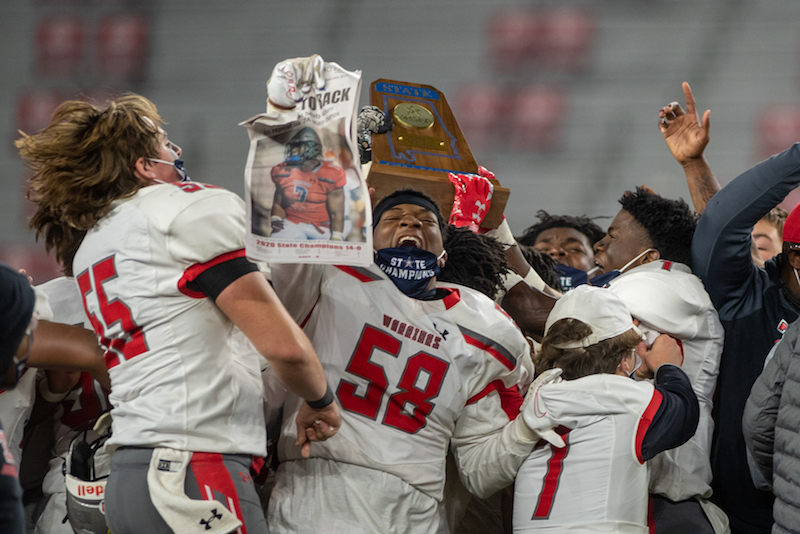 Thompson junior quarterback Conner Harrell was named the Class 7A Back of the Year winner for the 2020 season, making him the fourth consecutive winner of the award from Thompson. (File)

After their second 14-0 season in school history thanks to a magical state championship win, the Thompson Warriors finished the 2020 season inside the top 10 of the USA Today High School Football Super 25 poll.

The Warriors came in at No. 7 in the final poll released by the media outlet for the 2020 season. They also currently sit as the No. 7 team in the MaxPreps top 25 rankings with two top-10 teams still playing.

It marks the second year in a row the Warriors will finish inside the top 25 of two prominent high school polls after finishing 23rd in the USA Today poll last year and 16th in the High School Football America poll.

It’s another chapter in an ongoing story of a program that has taken major strides since 2014 when head coach Mark Freeman arrived.

He took over a 0-10 team and quickly made Thompson a .500 football team the next two seasons with back-to-back 5-5 seasons.

Perhaps one player from being a contender during those two seasons, the Warriors continued their improvement over the next four seasons and have gone 49-4 since the start of the 2017 season with trips to the semifinals of the playoffs each season.

This season, Thompson spent the majority of the season inside the top 10 thanks to the team’s ability to put away opponents with ease.

The Warriors scored an average of 43.1 points per game and gave up 15.9 points per game during the state championship season, scoring 42 or more and giving up 16 or less in eight of their 14 games.

No Thompson game seemed to be in doubt throughout the season until the Warriors faced adversity in the state championship game against the Auburn Tigers on Dec. 2.

That, however, set the stage for a magical finish to a special season.

Trailing 28-19 with 30 seconds left, the Warriors blocked a punt and returned it for a touchdown, recovered an onside kick and then got a game-winning 35-yard field goal from Trevor Hardy to win the game 29-28.

It may have taken some good fortune to come out on top in the championship, but the Warriors were also without starting quarterback Conner Harrell for the entire second half of the game.

Thompson also finished unbeaten after tackling one of the most difficult schedules in the state, featuring wins against two different No. 1 teams in the 6A classification and two wins against both No. 2 and No. 3 Hoover and Hewitt-Trussville in Class 7A.

The Warriors have now won 11 or more games in each of the last four seasons and have lost no more than two games in that span.

They now end the season as one of the country’s best team, and will likely be considered a top team nationally entering next year with the return of several defensive stars, including top national recruits Jeremiah Alexander and Tony Mitchell, as well as Harrell at quarterback.