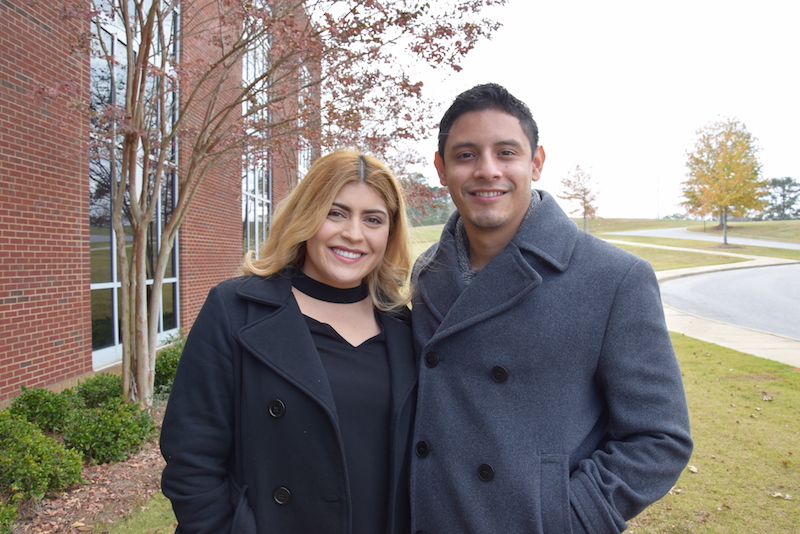 Katherine and Victor Daza graduated from Jefferson State Community College and both plan to attend UAB in spring 2021. (Contributed)

Victor Daza found an opportunity at Jefferson State, and as he prepares to move on years later, that opportunity has multiplied into many more for Victor and his wife, Katherine.

“Everything goes back to high school,” Victor said about the story of his college career. “When I came here to the United States, I came with a tourist visa. So my senior year (of high school), everyone is talking about their plans for life, and I said, ‘I guess I need to decide what I am going to do.’”

But Victor found his options were limited because of his immigration status.

“That was a really down feeling, thinking this is as far as I’m going to go,” Victor said.

But Victor would later enroll at Jefferson State and said he believes he was one of the first Hispanic students born outside of the United States to attend the college.

Victor, 31, was born in Mexico and moved to the United States at age 13. A Thompson High School graduate, Victor later moved to Bessemer, where he met Katherine.

Katherine had moved to Bessemer from Los Angeles years ago. After they began dating, Victor told Katherine she should consider attending Jefferson State. Katherine had previously earned some credits at another community college but did not earn a degree.

“It was closer to where we lived, and I really liked it,” Katherine said about JSCC. “It felt like a community, which is really awesome.”

The Dazas married in 2013, live in Thorsby and both work at the Regions Bank corporate office off Riverchase Parkway.

Victor and Katherine graduated from Jefferson State and both plan to attend UAB in spring 2021, studying marketing and business management, respectively.

“It’s good to have an education and do what you want to do,” Katherine said. “I’m the first one in my family to go to college and graduate. That’s so meaningful to me. I feel like I’m making a difference for my family.”

The Dazas said they will remember Jefferson State for the helpfulness of faculty and staff members. In particular, they said instructors including Jesse Bryson made a positive impact.

With a solid foundation built at Jefferson State through earning degrees in office administration and general business, the couple has hopes for a future working together.

“I want to one day have my own business,” Katherine said and added she has “many ideas” about what it could be, including working as a makeup artist or starting a line of cosmetics. Victor, who is now a U.S. citizen, could handle the marketing—and has even already launched a marketing business: Next Universal Visual Element Studios.

Victor said the important lesson in the couple’s story is: “It doesn’t matter where you come from.”

“Don’t give up on your dreams,” he said. “There’s always a way to do what’s in your heart.”