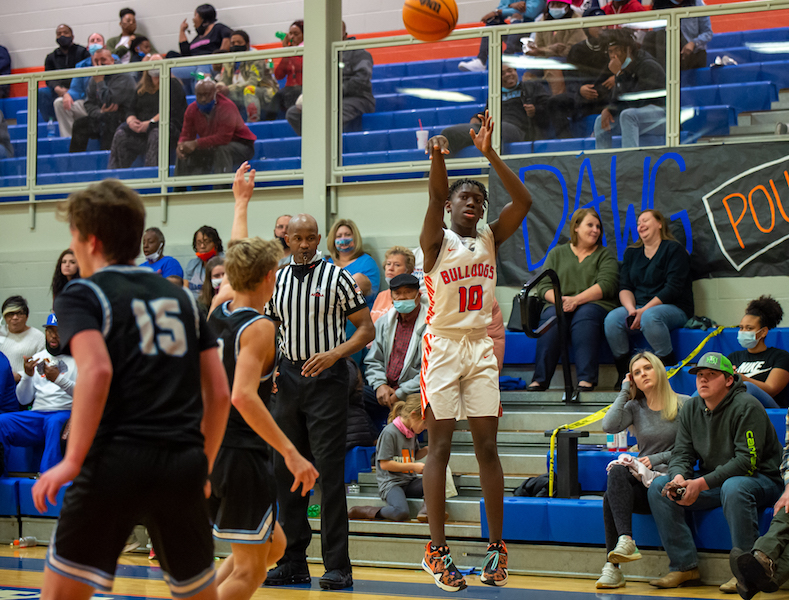 Montevallo’s Michael Jones, above, totaled 36 points in an area win against Bibb County on Tuesday, Jan. 5. (For the Reporter/Larry Dancy)

CENTREVILLE – The Montevallo Bulldogs evened their area record at 1-1 on Tuesday, Jan. 5, by taking down Bibb County 66-52 for their first win of the new year.

It was a crucial win for Montevallo, who lost its area opener 65-58 to Dallas County back in December. With the victory against the Choctaws, the Bulldogs pulled to 1-1 in area play and avoided a 0-2 start.

Montevallo’s performance featured 15 points or more in every quarter of the game, scoring 17 in three of the four quarters.

The first of those 17-point quarters came in the opening period as the Bulldogs got off to an ideal start on both ends of the floor.

Early in the quarter, Montevallo used strong defense to lead to quick offensive success and an 8-2 run out of the gate.

The Bulldogs eventually extended the early lead to 11-5 on a 3-pointer from Michael Jones, to give him eight of the team’s first 11 points.

Jones went on to score 10 points in the opening quarter, which helped Montevallo jump out to a 17-10 lead going into the second quarter.

The Choctaws trimmed the deficit down to four points early in the second quarter, but four points in a row from Grey Williams put Montevallo up by 10 points.

Montevallo’s lead eventually blossomed to 15 points when Jones hit another 3-pointer and had a stretch of five points in a row.

Bibb County was able to draw back within 10 points at 34-24 going into the half behind a 9-4 run to close out the second quarter, while Jones finished the half with 17 points.

The Choctaws used that confidence as a momentum boost coming out of the locker room for the second half which led to a 4-0 run.

That trimmed Montevallo’s lead to six points at 34-28, but a Jones 3-pointer put the Bulldogs back in front by nine.

From that point, Bibb County was forced to play catchup again, and with the help of Jones, Kavounte Britton and Jaydien Rutledge, the hole became too deep.

Montevallo went back up by as many as 13 and ended the third quarter with a 49-38 advantage.

Jones’ 36 points were a game high. Britton finished the game with seven points, while Williams added six points in the win.