Palmer spends his retirement serving others

“I was looking for something to do after retiring. I got tired of being at home all of the time, cutting grass, and fishing,” said 84-year-old Grayson Palmer.

So, he became a volunteer with Meals on Wheels in 2010. For the first year he delivered meals in Wilsonville. After the decline in the need for the program, he started working with the program in Columbiana. Every Tuesday and Thursday, Palmer loads the back of his pickup truck with the special warmer containers containing between 30 to 40 meals. 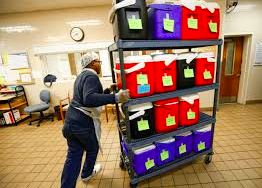 In his retirement, Grayson Palmer, 84, volunteers with Meals on Wheels. (Contributed)

Beginning his route around 10, he spends the next two-and-a-half hours making his round to the homes of Columbiana recipients. The amount of meal deliveries has increased due to the pandemic. Senior centers are not operating. Participants are no longer able to attend the senior center for events and activities, which included the meals provided through Meals on Wheels.

One might think the physical demands of hand delivering each meal to a resident’s door might take its toll on the 84-year-old, but he looks forward to each visit.

“I don’t mind at all. I try to make some laugh, pat their dog,” Palmer chuckled.

A number of individuals are in wheelchairs, on walkers or have other mobility issues. Palmer reports that the majority live alone.

Palmer is active in the Community Church, a group of approximately 15 individuals who gather each Sunday for about an hour. It provides an opportunity to engage community members and to minister to their spiritual needs. Palmer is responsible for arranging the weekly speaker. When a minister is unavailable, he arranges for the group to watch a video. He is among the first to arrive at the community building where residents assemble from 8:15 to 9.

“I get things going and I make coffee for the group,” he said.

Palmer enjoyed a successful career in photography for the technical department at Haze Aircraft.

“I didn’t mind it at all. It was a rather interesting field,” he said.

He was employed at General Electric where he photographed electric circuits for monitoring equipment in the aerospace program, then engineering drawing for Southern Company Services.

“It could get pretty involved,” Palmer commented about his occupation.

Born and raised in Birmingham, he has been married to his wife, Robbie for 61 years, the couple has two children. For the past 36 years the Palmers have enjoyed a “nice and quiet” setting on Lay Lake in Shelby Shores in Shelby County where they reside.