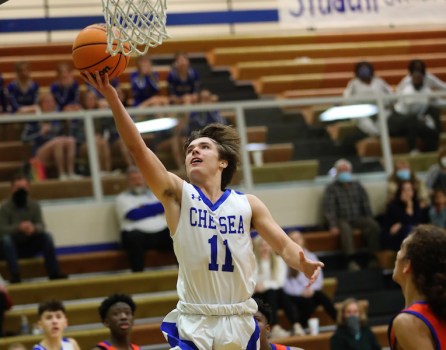 Holton Smith lays in the game-winning layup against Montevallo on Thursday, Jan. 7, for a 59-57 victory. (For the Reporter/Cari Dean) 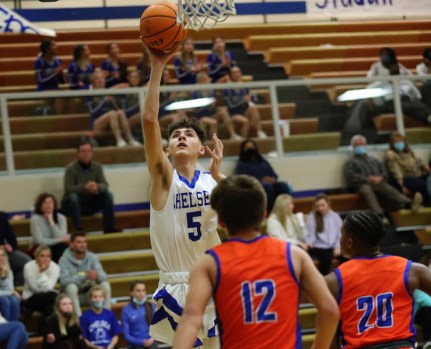 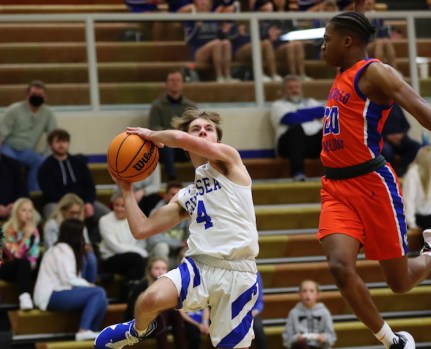 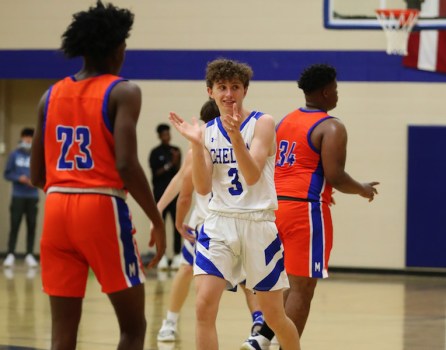 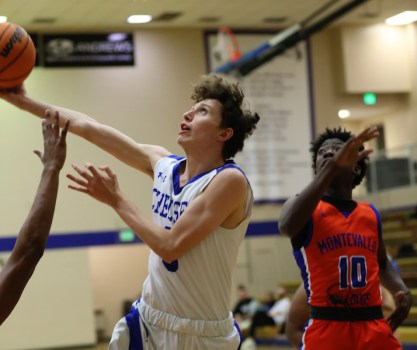 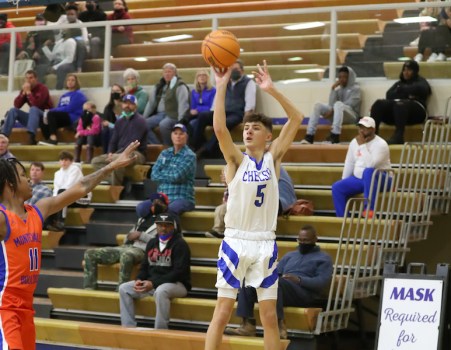 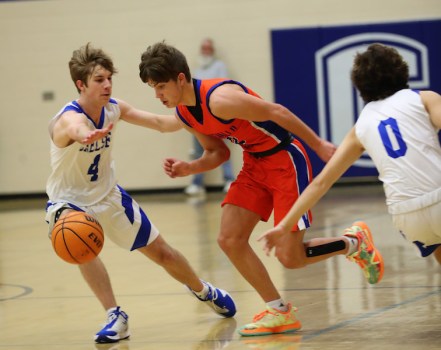 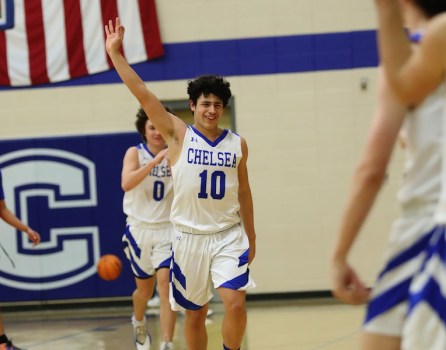 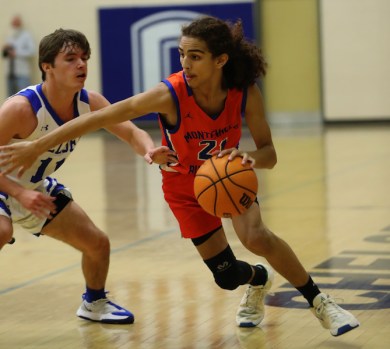 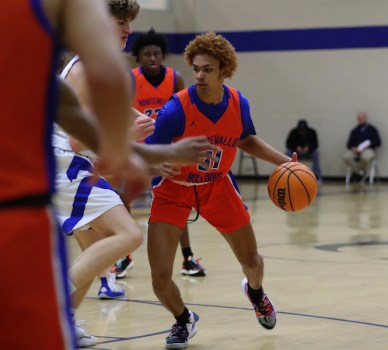 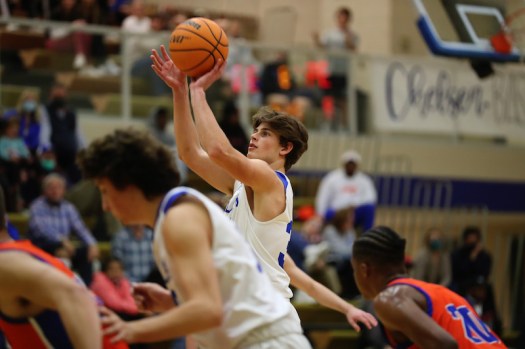 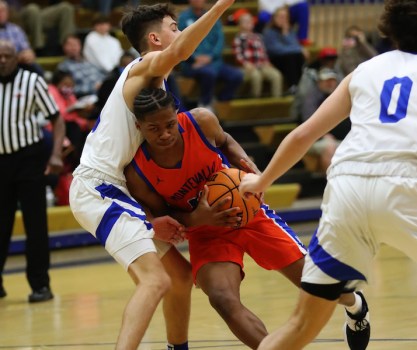 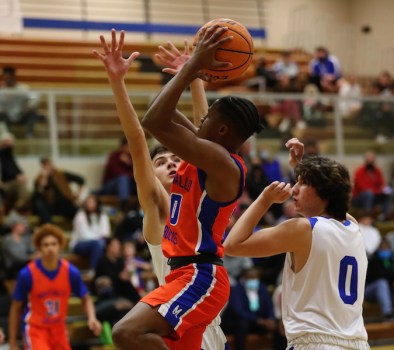 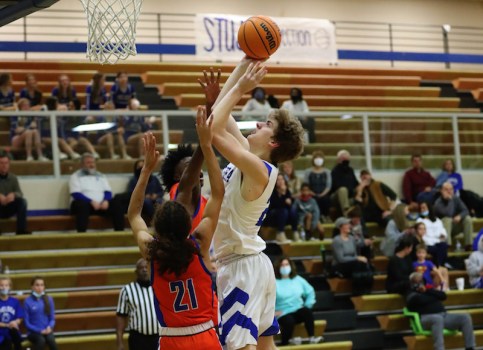 CHELSEA – Methodically handling the ball between the 3-point line and midcourt, Holton Smith made his move.

The Chelsea senior crossed over to his right, drove down the lane, euro-stepped by a second defender and laid the ball in with four seconds left to break a 57-57 tie with Montevallo.

That became the game-winning basket as the Hornets held off a furious comeback attempt by county foe Montevallo on Thursday, Jan. 7, when Michael Jones’ final shot attempt was put up too late, preserving a 59-57 victory for Chelsea.

But the game was one of runs that created plenty of fireworks early in the new year, starting in the first quarter.

Every time the Hornets started to pull away, Montevallo reeled them back in—something that became a theme for the night.

Chelsea jumped out of the gate to a 6-0 lead thanks to three baskets near the basket, but Montevallo answered back with a 3-pointer from Grey Williams followed by a steal that led to two free throws to cut the deficit to one point.

The patience of the Hornets led to back-to-back 3-pointers, two layups and two free throws to put them in front by 10 points at 19-9.

Kavounte Britton, however, knocked down a crucial 3-pointer just before the buzzer sounded to halt the run and bring the Bulldogs back within seven at 19-12 going to the second quarter.

Montevallo cut it to five points on a Javon Rogers steal and layup to start the second quarter and held steady within single digits for the first half of the period.

But that’s when Chelsea caught fire from beyond the arc. The Hornets hit three 3-pointers in a row to open up a commanding 34-17 lead late in the period.

The Bulldogs, however, did exactly what they needed to over the final three minutes of the quarter to get back in the game thanks to a 9-2 run to end the period.

That cut the deficit to 10 points going into the halftime break with Chelsea in front 36-26.

Despite the 10-point deficit at the half, Montevallo had found a rhythm and the break didn’t cool it down.

The Bulldogs quickly got back within single digits on a layup from Dylan Campbell early in the third quarter, which kept the momentum going in their favor.

Montevallo started the third on a 7-0 run, which extended its run to 16-2 dating back to the end of the second quarter.

That brought the Bulldogs to within three points at 36-33.

But the game of runs continued. Chelsea responded with a big 10-3 run to end the third quarter thanks in large part to five consecutive points from Paul Lanzi.

Now up 46-36 going to the final quarter, Chelsea continued another strong run in the game by starting the fourth on a 5-0 run thanks to a layup from Cooper Griffin and and-1 from Warner Jones.

It looked as if that may be the final blow for the Bulldogs, but that was before Jones found his touch.

The junior went on to score 13 points down the stretch to will his team back into the game, while Jaydien Rutledge made four clutch free throws.

Then, Chelsea gave the ball back to the Bulldogs following a travel on an inbounds pass. But even worse, the Hornets gave the hottest player on the floor two looks at a 3-pointer shortly after.

After the turnover, Jones came off a screen and got a good look at a game-tying 3-pointer, but rushed the shot. It missed off the left side of the iron, but took a Montevallo bounce.

Chasing his shot, Jones was right around the ball again after a teammate grabbed the rebound. The ball was kicked to him in the corner, and this time he took his time to line up the wide open shot before hitting nothing but the bottom of the net to tie the game.

But Montevallo had poured so much into the comeback attempt that the defense looked tired.

Chelsea, on the other hand, had been able to get to the rim much of the night and that was no different as they held for the final shot. After a few passes, Smith ended up with the ball before making the game-winning play to give the Hornets a hard-fought close win after several close losses this year.

Lanzi led the way for Chelsea with 15 points, while Jones added 13. Nine players scored in all for the Hornets.

Montevallo was led by Jones with 16 points, all of which came in the second half, while Dylan Campbell added 12 in the post.