Helena pulls off comeback in road win at Oak Mountain 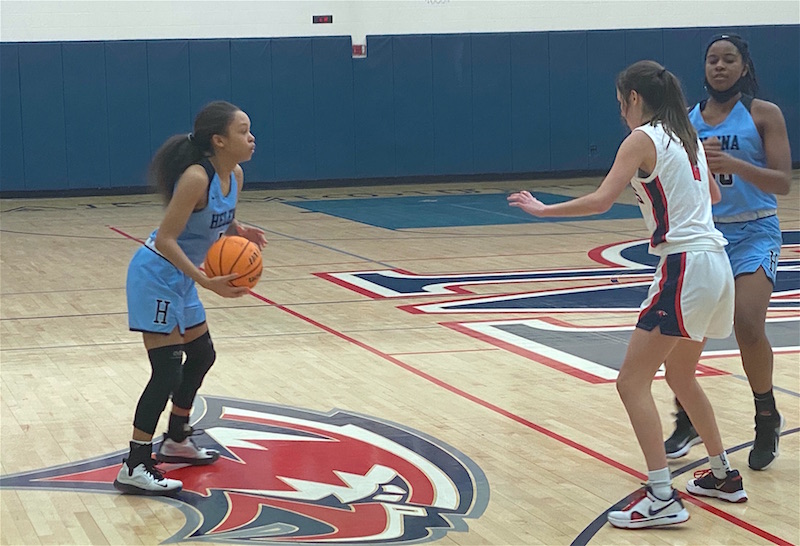 The Helena Huskies were able to use a late 16-4 run to come back and take down Oak Mountain on the road on Friday, Jan. 8. (File)

NORTH SHELBY – The Helena Huskies were able to overcome an eight-point deficit late in the third quarter by mounting a 16-4 run between the third and fourth quarters to pick up a 50-48 win against county foe Oak Mountain on Friday, Jan. 8.

The Huskies trailed 32-24 near the end of the third quarter but put together a 10-4 run to end the period, which brought them within two points at 36-34 going to the final quarter.

Helena carried that confidence into the fourth period be extending the run to 16-4, which put the Huskies in front 40-36 early in the frame.

Riley Sullivan, however, hit a big 3-pointer for Oak Mountain to halt the run and trim the deficit to one point. That sparked a 7-2 run for the Eagles that saw them regain the lead at 43-42.

But Briana Wilson answered for the Huskies in the form of an and-1 that gave Helena the lead right back.

The lead traded hands two more times with Montana Harris putting the Huskies back in front briefly before Abby Gordon knocked down a 3-pointer for the Eagles to give them a 48-47 lead.

But shortly after, Harris hit a jumper to give Helena the lead back, and this time it wasn’t given back. The Huskies made one more free throw to make it a two-point lead, and although the Eagles got the final shot, a 3-pointer in the final seconds went all the way around the rim before falling off the front to preserve the 50-48 victory for the Huskies.

The runs at the end weren’t new to either team, as that’s how much of the game was played.

The Huskies got six points from Harris, four from Kennedi Nobles and four from Wilson in the quarter to help them jump out to a five-point lead after limiting Oak Mountain to 11 points.

The Eagles, however, had some confidence after Gordon knocked down two 3-pointers in the quarter. The offensive effort continued into the second quarter when Charity Shaw got going.

Shaw made three field goals and a free throw for seven points, which sparked a 16-point period for Oak Mountain. Even more important, the defense also woke up and cut the Huskies’ production in half in the second quarter, allowing eight points.

The effort on the defensive end helped the Eagles grab a 27-24 lead going into the halftime break.

And early in the third quarter, they seemed to be on their way to pulling away after starting the period on a 5-0 run to extend the advantage to eight points.

At that point, Helena was searching for confidence and struggling to find any open space on the offensive end of the floor.

But after a couple of defensive stops helped start the break and get the Eagles off their game, the Huskies capitalized and started the 10-4 run to end the third quarter.

That not only brought them back into the game, but ultimately gave them the confidence to finish of the win in the final quarter with their 16-4 run between the third and fourth making the difference.

Helena was led by Harris with 18 points and eight rebounds, while Wilson and Nobbles each added 11 points.

Oak Mountain was led by 15 from Shaw, while Raegan Whitaker and Abby Gordon each added 12 points.