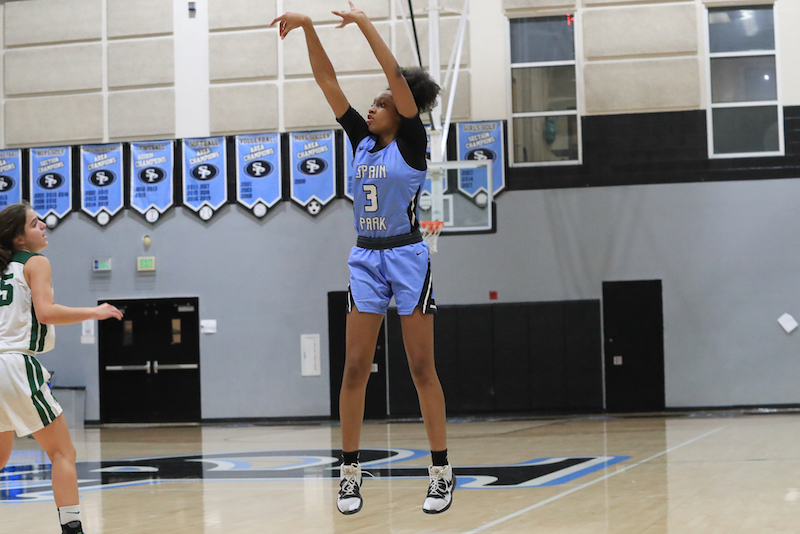 Spain Park’s girls basketball team picked up a win against Gadsden City on Friday, Jan. 8, to improve to 1-0 in area play. (File)

GADSDEN – The Spain Park girls basketball team continued to show its ability to be one of the best teams in the state on Friday, Jan. 8, in an area road matchup with the Gadsden City Titans.

It was a tough area opener for the No. 6 Jags, as Gadsden City entered the game 12-2 as the No. 9 team in the classification. But Spain Park’s schedule has been rattled with difficult opponents, and that paid off when squaring off with the Titans.

The Jags, who have been inconsistent at times on the offensive end of the floor this season, put together a dominant start in this game by scoring 24 points, which paved the way to a strong night on both ends of the floor and led to a 21-point, 64-43 win.

Spain Park’s 24-point first quarter was more than enough to create separation early in the game because of the equally as impressive start defensively.

The Jags’ sense of urgency on defense led to them giving up just seven points, also sparking the success on the offensive end. That helped Spain Park take a quick 17-point advantage, putting Gadsden City in a deep hole against the defending state champs.

The Titans, however, looked like they might be able to climb out of the hole after flipping the script in the second quarter.

Gadsden City cut Spain Park’s offensive production down by close to 20 points to six in the second period, as the inconsistency for the Jags came into play.

But the Spain Park defense still held strong. While the Titans had their second best offensive quarter of the game, their 12 points only cut into the deficit by six points, giving the Jags a 30-19 lead at the half.

And getting to the half seemed to be a saving grace for the Jags.

They made necessary adjustments and came out with the same urgency they had in the opening quarter of the game.

The offense found its rhythm again, while the defense continued a dominant night. The Jaguars put up 19 points on the offensive end and gave up half that defensively to extend their advantage to 49-27 going to the fourth quarter.

Gadsden City answered with its best offensive period of the game with 16 points, but Spain Park matched the Titans throughout the quarter and posted 15 points to cap off the 21-point victory.

Oak Mountain pulls away in county win against Helena