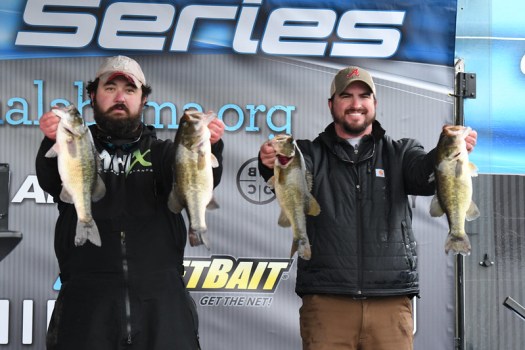 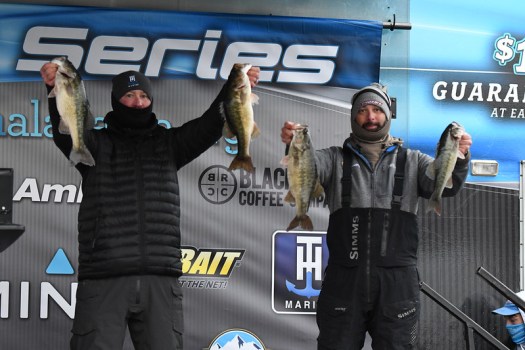 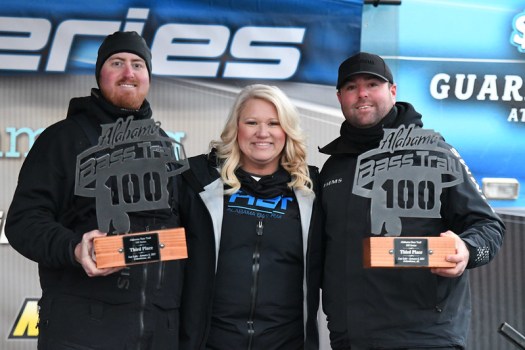 By JASON DURAN / Special to the Reporter

COLUMBIANA — One hundred teams launched at Beeswax Park for the first of three events in the brand-new Alabama Bass Trail 100 series. The ABT 100 series features 100 teams, 100 percent payback and $100,000 total payout in each event. Logan Johnson and Jeremy Christian claimed the first-place title and took home the hardware and $25,000.

Johnson and Christian started the morning in an area they found in practice and felt would produce because of the large amount of shad active in the area. They soon realized it wasn’t the winning spot and quickly moved to their second area located in Spring Creek.

“It was a very large area, and in practice, we found it also was holding a lot of shad,” Johnson said. They spent the rest of the day on the trolling motor in this area.

Johnson caught the big fish of the tournament, a 5.01 spot, near a dock. He was surprised to catch a spot in that area, saying, “it was completely random. I caught it on the second cast in a transition area between docks.”

During practice he fished near the area and decided to give the bank a try. The area was loaded with shad, and he shook off three fish during practice, so he decided it would be a good place to try on Saturday and expand on.

“When Logan caught that big fish, it really helped us settle down on a very frustrating morning,” Christian said.

Johnson noted, “I didn’t really know what was holding the fish in this area other than the shad. The area was shallow with grass mixed in.”

They worked the area over because they felt the fish were there.

“We stuck with this pattern also because we didn’t really have anything else and knew we would just have to grind it out,” Christian said.

After practice they felt it would take around 19 pounds to win. They ended up with catching six fish all day long, but they were the right fish for a total of 18.70 with four largemouth and a 5.01 spotted bass.

Johnson said he and Christian talked all week how cool it would be to win the very first ABT 100. He said they “have won an ABT event before, but winning this one is kind of surreal.”

They are not only the first ABT 100 winners; they also hold the record for the largest bass ever caught in an ABT with 10.36 at Lake Guntersville. This time they proved they are a solid team and stand tall against the best of the best in the ABT 100.

The second-place team of Gerald Swindle and Ryan Anaya made the long run north to the dam.

“Them boys don’t want to go where we go,” Swindle added.

They spent eight hours fishing a drift pattern. They would drive up to the dam and drift back with the current for about a mile just fishing and talking.

“You have to be so patient; you can’t call your shot and say throw right there,” Swindle said. “You go up there and just drift backwards for hours. We would get on a run where we caught a couple, and then it would be hours before we caught another one. It’s a style of fishing that messes most people up because it’s so boring and seems so random, but we know if two people do it for seven to eight hours a day, they’re going to get seven to eight bites and have 17-18 pounds.”

They were right as they weighed in 17.06 pounds.

In addition to their $12,500 second place money, they also took home a $500 Garmin bonus. They used Garmin Live Scope to help them find places where the bank and other structure caused the current to speed up. There they would cast their bait and come by those areas saying they could see the fish come up and go after their bait.

They said, “it is a big bait and it looked like we were tarpon fishing.”

“You can go up there, throw a little jig and probably get a lot more bites, but you won’t catch any of the quality 4-pound bites,” Swindle said.

Anaya is recovering from a very difficult battle with COVID-19. He spent seven days in the ICU and weeks on oxygen recovering at home.

He just started back fishing and said, “Today was a fun day but at times. I still got a little winded.”

Swindle said, “it’s awesome being able to come back and fish this format with the guys I grew up fishing with. These are my boys and it brings back the fun of fishing to see everybody.”

Third place went to Paul Davis and Josh Chapple, also long-time fishermen on the ABT, having fished the ABT North and the ABT South in previous years.

“The morning started out slow,” Chapple said. “We began early throwing a jerkbait in chartreuse and a red Rapala Shad Rap. We hit a couple spots using that pattern and decided to make an adjustment.”

They said they have some “good history on this lake and went with the idea of knowing where to be this time of year.”

Saturday the current didn’t really play a factor for teams on the south end of the lake. The duo said they have fished here enough to “know not to base their tournament on the current.”

After making a couple adjustments and a location change, Davis caught a 4.35 and followed right up with a 3.5 about 9. After that quick flurry of fish catches, they thought they had figured them out. However, Chapple said then “the fishing got really, really slow, so we made another adjustment and moved around a little more. We spent some time flipping to finish out our limit.”

They spent most of their time fishing the “narrows” fishing primarily in the creeks off the river. With a total of 16.37 they secured third place and a $10,000 pay day. They echoed what many teams keep saying, “we are just looking forward to Eufaula.”

The second stop of the Alabama Bass Trail 100 will be on Lake Eufaula, “The Bass Fishing Capital of the World,” Saturday, June 5, where once again 100 teams will go for the $100,000 total payout.