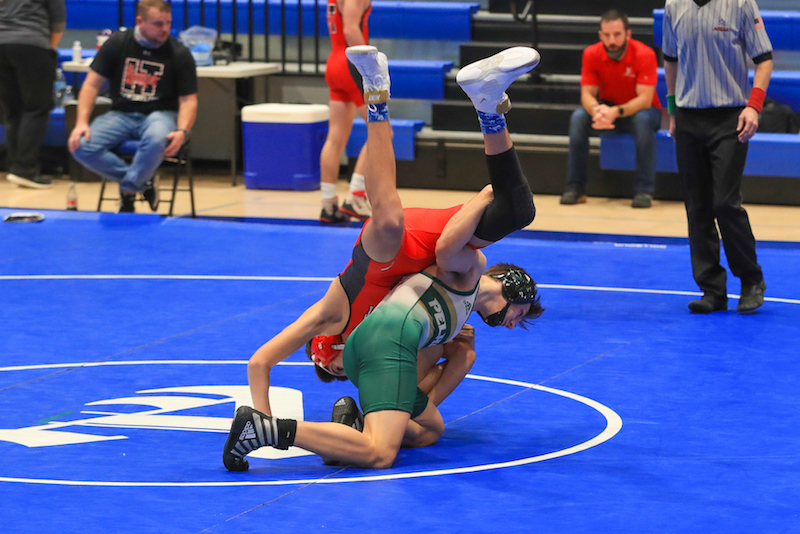 The Pelham wrestling team has been busy in recent weeks, competing in several different events over the Christmas break. (For the Reporter/Dawn Harrison)

The Pelham Panthers wrestling had a busy holiday season, competing in four separate events against nine different teams to give their wrestlers an opportunity to have some mat time that has  been difficult to come by due to COVID-19 restrictions.

On Dec. 18, Pelham participated in tri-match without a full roster. The Panthers walked into every match with a 30-point deficit as they had five weight classes unfilled.

Then, in what was probably one of the quickest matches of the season, Pelham beat Carver High School with a score of 54-27 as both teams forfeited 12 of 14 weight classes.

Three Pelham wrestlers went undefeated winning all three of their matches during the tri-match, including Trae Peeler, Stone Peerson and Nico Ramos.

A day later on Dec. 19, Pelham faced off against Hartselle and Mountain Brook in a tri-match. The unfilled weight classes still caused a deficit in both matches, but it wasn’t as pressing as both Hartselle and Mountain Brook also had unfilled weight classes allowing for double forfeits and no points gained nor lost for either team.

Pelham took on a state-championship contending Mountain Brook team first and fell by a score of 45-18, only winning four of the 12 weight classes wrestled.

But against Hartselle, the Panthers were able to bounce back and pull off a win with a score of 38-18.

Peeler again had a strong showing, winning both of his matches, while Bryce Wanagat and Seth Branham also picked up two consecutive wins for the Panthers.

Then, just before Christmas on Dec. 22,  Pelham wrestled in a quick match against Elmore County picking up a dominant 66-12 win.

With a total of nine of the 14 weight classes being forfeited, Pelham, who only had two forfeits, won the four matches that actually took place with two falls and two decisions.

In Pelham’s final tournament over the break, the Panthers faced off against three teams falling to defending state champions Arab by a score of 55-18 and Gardendale by a score of 40-29.

They were, however, able to pick up another win against Hartselle with a score of 78-6.

Both Peeler and Wanagat walked away undefeated in those three matches to close out a special holiday run and cement themselves as championship contenders this year.