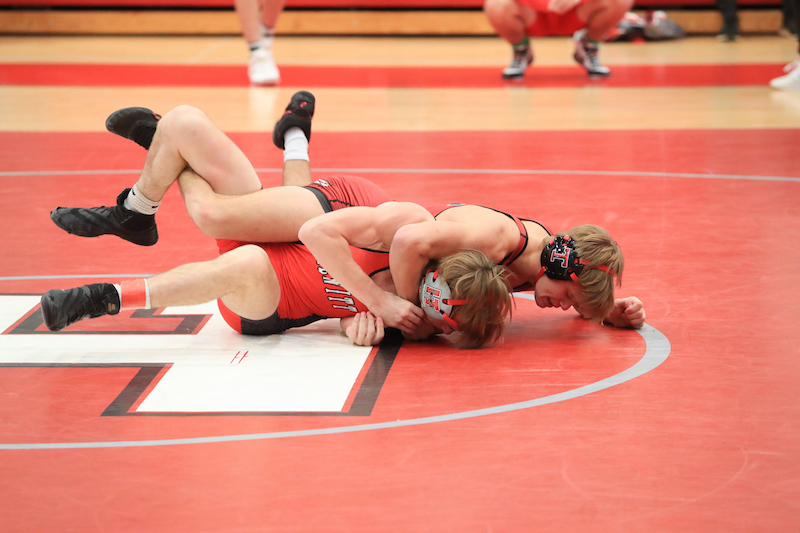 The Thompson wrestling team won its fifth consecutive region championship on Thursday, Jan. 7, thanks to wins against Auburn and Smiths Station. (For the Reporter/Dawn Harrison)

ALABASTER – The reigning Class 7A State Champion Thompson Warriors are poised to compete for another title to add to their impressive list of victories after bringing home their fifth consecutive region championship on Thursday, Jan. 7.

The Warriors clenched the title by beating both Auburn and Smiths Station in dominant fashion thanks to winning 22 of the 28 matches.

Thompson won over Smith Station with a score of 57-15 behind five falls, two tech falls, two major decisions, one decision and one forfeit. The Warriors won 11 of the 14 weight classes in the matchup.

Then, taking on Auburn, Thompson put together an even more dominant performance with a 62-12 victory behind nine falls and two major decision wins. The Warriors again won 11 of 14 weight classes.

In the 106 weight class, Kiowa Vines won over Timothy Luttrell of Smiths Station with a score of 12-0 for a major decision. He then picked up the fastest fall time of the night in only 23 second when he took down Auburn’s Cale Garner to cap off a strong night.

Thomas Giere dominated the 113-pound weight class as he pinned both of his opponents in less than a minute.

In the 120-pound division, Nick Dempsey won via tech fall over Craig Harris thanks to a score of 15-0 and a fall time of 4:31. Dempsey then made quick work of Nathan Rich of Auburn when he pinned him in 1:57.

In the 138-pound weight class, Wilson Kennedy picked up two wins on the night as well, grabbing a 17-2 tech fall victory and a 14-3 major decision.

James Latona racked up 12 team points for Thompson in the 145-pound classification, as he pinned Ayden Rice of Smiths Station in 2:00, and then pinned McKell Stackhouse of Auburn with a fall time of 3:09.

In the 160 division, Will Garrett picked up two major decision wins by final scores of 8-0 and 17-5 to complete a perfect night.

Will Miller was the next teammate to earn his 12 points for the Warriors as he pinned both of his opponents in the 170 weight class.

Thompson will now look to prepare for the State Duals Wrestling Championship set for Jan. 22.