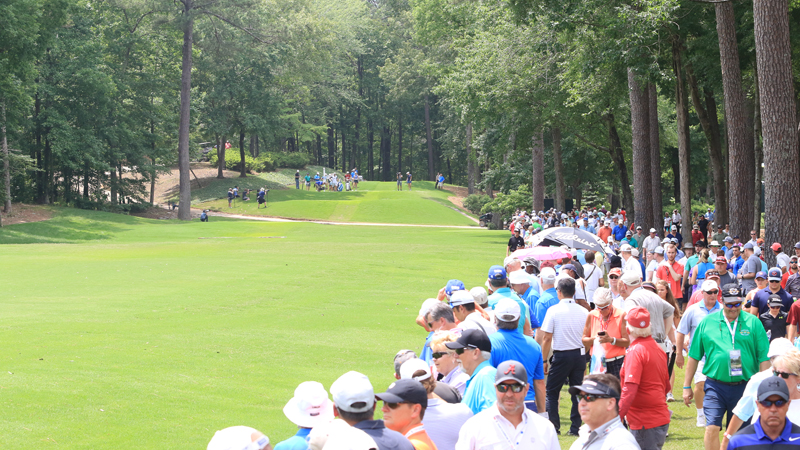 Fans enjoy the U.S. Women’s Open at Shoal Creek in 2018. (For the Reporter/Dawn Harrison)

BIRMINGHAM – Alabama has long been known as one of the most underrated and serene golf states in the country, but that soon could change.

Shoal Creek Club, situated off Shelby County 41 in North Shelby County, is ranked as one of the top 100 courses in America and may now have the opportunity to host its first men’s major championship in more than 30 years.

On Jan. 10, the PGA of America announced that its board of directors had voted to terminate the agreement to play the 2022 PGA Championship at Trump Bedminster in New Jersey, thus opening the door for a new course to play host.

Rumors quickly started to soar about who would take on the new role of hosting the 104th PGA Championship, and Shoal Creek was one of the three courses mentioned as making a push.

“We are obviously very interested in hosting and would be delighted to host the PGA Championship again in 2022,” said the club’s director of tournaments Brad Bailey. “I know it would be a phenomenal event for Shelby County, the city of Birmingham and Alabama. I know the community would support it, as they have with every other golf event that we’ve had.”

“Just from an economic impact, it would be the biggest thing to happen in some time,” Bailey said of the potential. “We would love to be able to host that and have everybody here to enjoy Shoal Creek again. It’s in our DNA to host tournaments, and we feel we are equipped to do it in a short period of time.”

And the short period of time to get the course ready is something the staff at Shoal Creek would welcome after what they pulled off when hosting the U.S. Women’s Open.

Just days before the tournament, Tropical Storm Alberto dumped torrential rains onto the course and downed several trees the Sunday night of tournament week. But the course’s staff went to work and got the course in pristine shape to put on an impressive tournament.

“That is the biggest event in women’s golf and despite a tropical storm in May, we put on a great championship,” Bailey said. “We’ve proven that we have the capacity to support and host that type of event. It’s a community event that looks appealing from both an economic and competitive standpoint.”

But it’s up to the PGA of America as to where the tournament will go, and one of the reasons it has been 30 years since Shoal Creek hosted is because of its presence during a crossroads in golf history.

Just prior to the 1990 PGA Championship, a firestorm surrounded the tournament after comments made by Thompson about the lack of Black members at the course, saying “This is our home and we pick and choose who we want.”

His comments almost forced the tournament to be moved in the weeks leading up to the championship, but former PGA of America CEO Jim Awtrey helped put some of the fire out by convincing the club to invite Black Birmingham businessman Louis Willie to join the club as a member.

The tournament was then played Aug. 9-12, 1990, and that moment changed the sport’s landscape moving forward.

From that point on, the PGA of America, PGA Tour and USGA all required clubs to not discriminate in any way when selecting members.

Shortly after, Augusta National added its first Black member as did many other courses, setting up a new and more inclusive future in the sport.

Now, Shoal Creek has members of different races and sexes, including former U.S. Secretary of State Condoleeza Rice, who is both Black and female.

But it still took a while for the club to host any USGA, PGA of America or PGA Tour event again.

The U.S. Junior Amateur was the first when the USGA brought the event to Shoal Creek in 2008, and that seemed to start the redemption path.

The PGA Tour Champions moved the Regions Tradition there from 2011-2015, and then the USGA brought the U.S. Women’s Open in 2018 with players from all around the world participating in the major championship.

Now, 30 years after Shoal Creek’s last PGA Championship stirred up controversy, the course seems primed to be a host once again both from a competitive and inclusive standpoint.

In order to host the U.S. Women’s Open, the course went through extensive upgrades with changes to full sand greens, a new grass, new bunkers, narrower fairways on every hole and more difficult greens.

“I’ve seen first-hand how hard this staff and membership has worked to improve Shoal Creek in every way,” PGA Tour pro and Birmingham native Smylie Kaufman said on Twitter. “There has been so much positive change at Shoal Creek since they last hosted the PGA, and I hope they can get another shot in 2022.”

And with those changes, Bailey knows the course offers what would be a great test for the world’s best.

“We had a significant renovation in 2017. We think we have a golf course that can stand up to the best players in the world. How it is set up would be up to the governing body, but we have a great piece of property and would be able to set it up to test the best in the world,” he said.

The tournament would be a welcome sight to the area with the state of Alabama being among one of the best in the country for golf but often overlooked.

With the Robert Trent Jones Golf Trail across the state featuring some of the top courses in the country as well as Greystone Golf and Country Club, the courses stand on their own.

It is unclear when an announcement on the new host for the 2022 PGA Championship will be made, but Shoal Creek sits as one of the top contenders, and the state sits ready to support it.