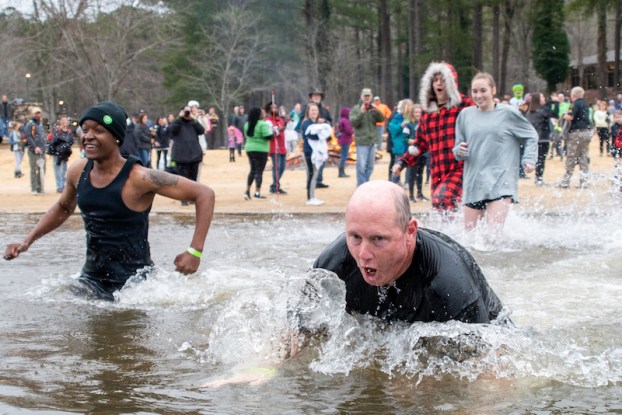 The Pelham Police Department will not host its annual Polar Plunge fundraiser for Special Olympics of Alabama this year because of the ongoing COVID-19 pandemic. (File)

PELHAM — In what would be its 11th year, the Pelham Police Department will not be hosting the annual Polar Plunge event out of an abundance of caution due to the COVID-19 pandemic.

The event, a fundraiser hosted by PPD designed to benefit the Special Olympics of Alabama, would move forward in a normal year, but the pandemic makes hosting the Polar Plunge too risky, according to the city of Pelham’s communication manager, Ainsley Allison.

“Although it is an outdoor event, it draws hundreds of people, most of whom huddle around two large bonfires,” Allison said. “We determined it best to cancel rather than put people’s health at risk.”

The charity event typically sees residents visit Oak Mountain State Park in January. During a normal year, hundreds of guests would flock to the park to willingly jump into the chilly waters to help raise money for the cause.

In past years, the dunking has generated tens of thousands of dollars to help support athletes in the Special Olympics. However, with the threat of COVID-19 ongoing, the city felt that this move was the socially responsible thing to do.

As Allison mentioned, to warm up after the plunge, divers would warm up around the large bonfires built around the lake; however, this would see many people standing too near to each other in a setting where wearing a mask or properly distancing might be harder.