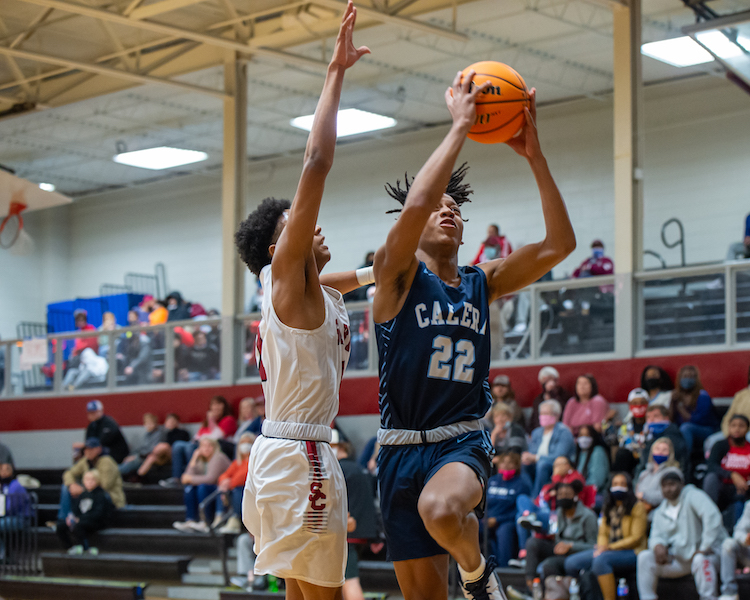 CLANTON – The Calera Eagles continued an impressive season on the offensive end of the floor on Friday, Jan. 15, to pick up a 71-60 area win against Chilton County.

On the road, Calera got off to a slow start defensively and ended up allowing 18 or more points in two of three quarters, but the consistency from the Eagles on offense continued to make a difference.

The Eagles scored at least 15 in every quarter, while the defense bounced back in the middle quarters to help them create the separation that was needed to pick up the victory.

The game started as a back-and-forth battle with both teams totaling 18 points in the first quarter behind balanced efforts. The Eagles had six score in the quarter, while the Tigers had five score.

But after the slow start defensively from the Eagles, they bounced back in the second quarter by cutting Chilton County’s production in half.

The Tigers went from five scorers down to three and only posted nine points.

Calera’s offense posted its worst quarter of the game, but that still meant 15 points from five different scorers, which gave the Eagles a 33-27 lead at the break.

Coming out of the half, Calera’s offense picked up right where it left off with 18 more points behind six from Tre Stoutermire and four from Isaiah Green.

But the turnaround defensively continued to be what made the difference.

The Eagles allowed just 10 more points, which helped them take a 51-37 advantage into the final quarter.

With the Calera offense playing so well, that was a difficult hill for the Tigers to climb.

And luckily for the Eagles, they saved their best offensive quarter for last.

Chilton County did the same, as the Tigers came out and posted 23 points behind 15 points from Jakeveon Bolding.

But Calera made five of its six free throws in the final quarter and got at least four points from Green, Keshawn Haynes and Jordan Eggleston to post 20 points and put away the 11-point win.

The Eagles were led by 14 points from Haynes, while Green was just behind with 13 and Stoutermire just behind him with 12. Eggleston added nine, while Calera continued to show its depth with 11 players scoring in the win.