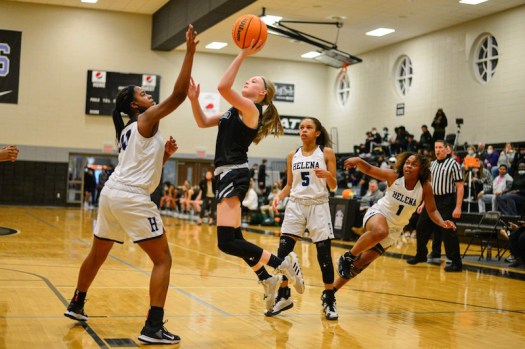 Laci Gogan, above, posted 22 points for Pelham in a rivalry area win against Helena on Friday, Jan. 15. (For the Reporter/Jeremy Raines) 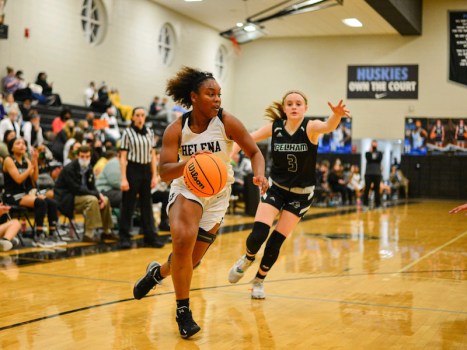 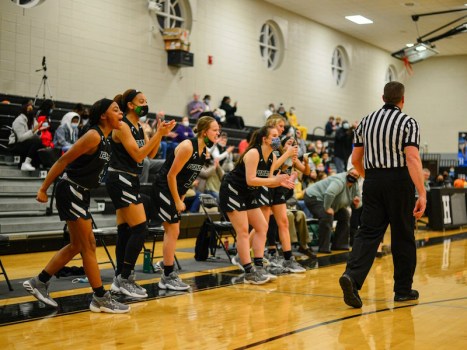 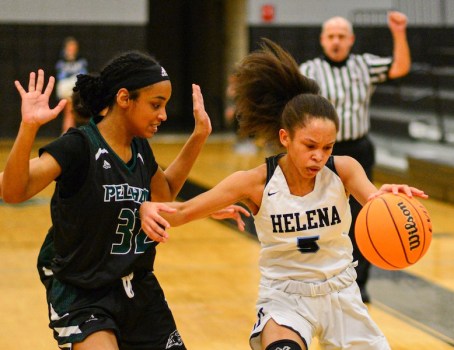 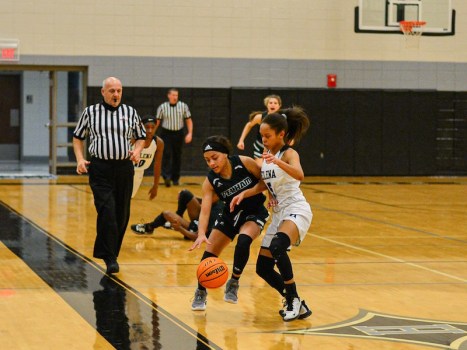 HELENA – The Pelham Panthers improved to 2-0 in area play on Friday, Jan. 15, thanks to a road win against rival Helena behind strong defense and three scorers in double figures.

The Panthers gave up 11 or less in every quarter of the game, while Laci Gogan, Myriah Tate and Emma McKenney all continued impressive seasons by finishing in double figures to lead Pelham to a 54-35 victory.

Gogan was a big part of the success thanks to an incredible night of shooting, both from the field and the free throw line. She knocked down three field goals and two 3-pointers, while making all 10 of her free throws for 22 points.

She also got off to a strong start for the Panthers, as did Tate, which helped set the pace.

After the teams battled to a 5-5 tie in the early going, Pelham went on to outscore the Huskies 12-6 the rest of the first quarter to take an early 17-11 lead.

The Panthers got eight from Gogan in the period, while Tate added five.

But the second quarter is where the game took its biggest turn.

In what became a more physical battle, Helena was determined to stop Gogan from making shots, but that just put her on the free throw line.

She went on to knock down all six of her free throws in the quarter, while McKenney went to work in the paint with three field goals. The scoring of those two, as well as a 3-pointer from Victoria West, helped the Panthers score 15 more points in the quarter.

But that wasn’t the most impressive aspect of their second period. Pelham also limited Helena to one field goal, while the Huskies missed four of five from the line to only post three points in the quarter.

Coming out of the break, Pelham continued a strong night from its top scorers when Gogan knocked down two 3-pointers, Tate posted four more points and McKenney added three more.

That helped the Panthers post 14 more in the third quarter, and while Helena’s offense improved, the Huskies only put up 10, which allowed the visitors to extend their lead to 46-24 going to the final quarter.

That was more than enough cushion for Pelham, as the Panthers coasted to victory in the fourth despite being outscored 11-8.

In addition to 20 from Gogan, Pelham got 11 each from McKenney and Tate.

Helena was led by 11 points from Kennedi Nobles.