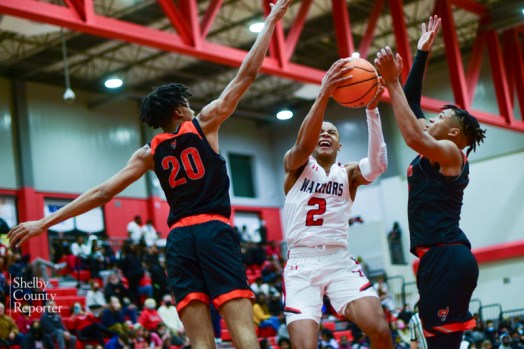 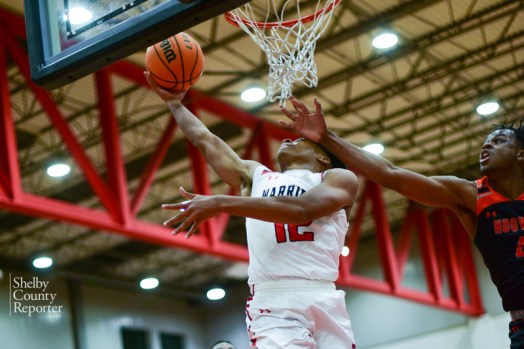 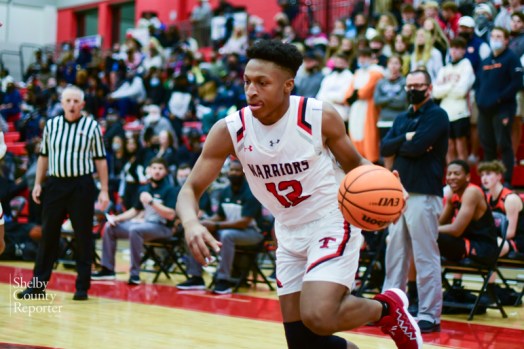 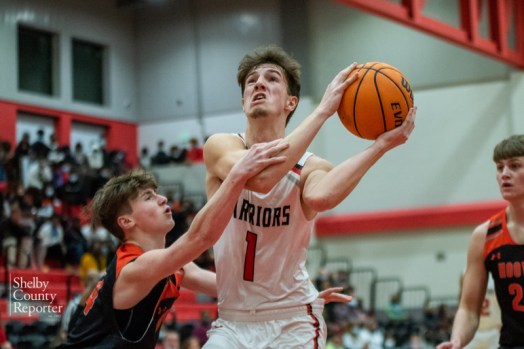 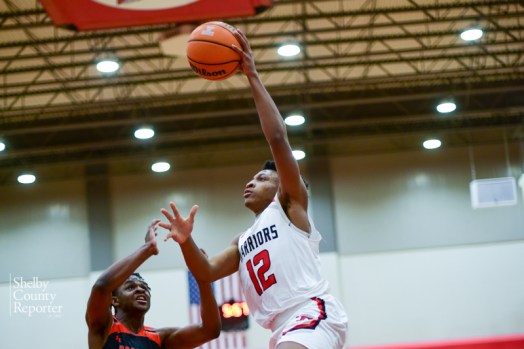 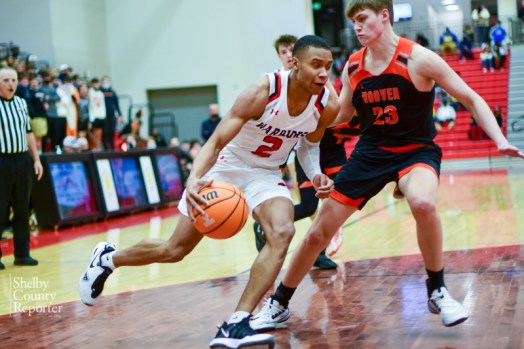 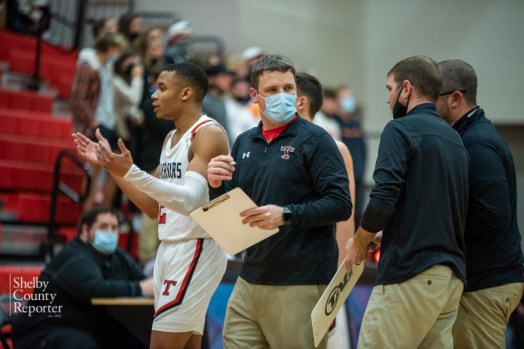 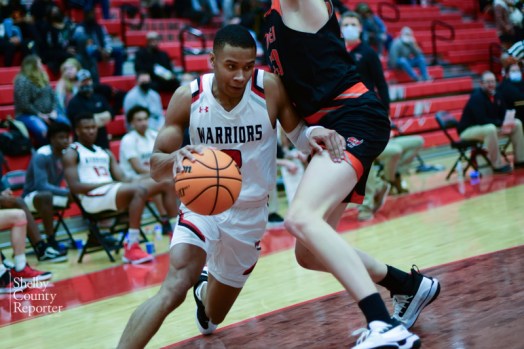 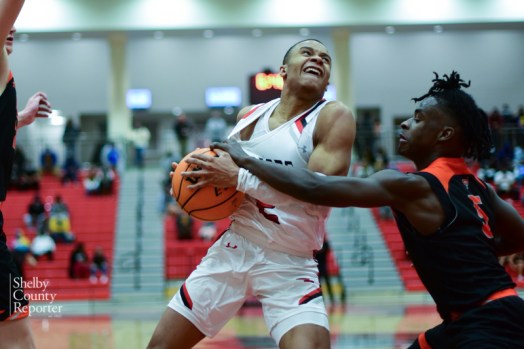 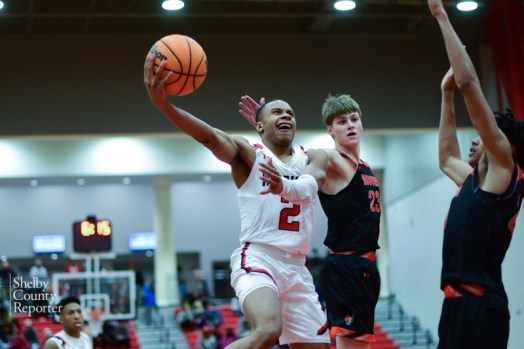 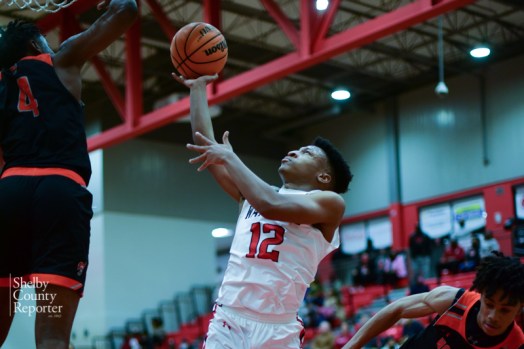 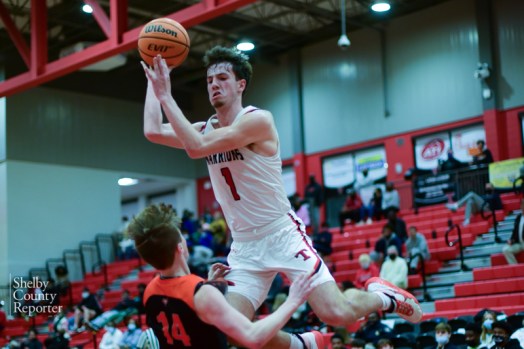 ALABASTER – After losing three of their last four games by a combined 15 points, the Thompson Warriors needed a bounce-back game and an area win in a big way and got both on Friday, Jan. 15 against the No. 4 team in the state.

Thompson, who is ranked No. 9, used a dominant fourth quarter to close out the Buccaneers for a 53-44 win and even its area record at 1-1.

“I was really proud of our guys’ response to the tough loss on Tuesday night, and I thought we came out and competed hard,” Thompson head coach Dru Powell said. “Really, for four quarters we played well, especially in the second quarter. The biggest thing for our team tonight was hang on late in a tough, close game and pull out a win.”

The Warriors came out with great energy in the first quarter getting on the boards to net some extra opportunities and only allowed one offensive rebound from Hoover.

Thompson also got 3-pointers from Grant Hopkins, Wes Roberson and Jack Dorolek as they built a 16-11 lead and led 18-14 after one.

The tempo of the game flipped on a dime in the second period as both teams went cold. Roberson added another 3-pointer, but that was the only basket for the Warriors before halftime.

Fortunately, they locked down on the defensive end and got to the foul line to maintain their lead.

Thompson held its largest lead until that point, but Hoover was able to sneak in a three with just six seconds remaining to make it 24-19 at the break.

Hoover came out gunning in the third quarter with an 8-2 run to take its first lead since 5-4 in the first quarter.

Dorolek hit another three before Hoover responded in kind, but the Warriors had the last laugh as Steven Walker canned his first triple just before the end of the period.

Brad Lewis had two baskets in the third as well to close his 10-point night.

Thompson then sensed the urgency of the moment from the beginning of the final period.

Hopkins scored the first four points to get the Warriors started and led the team with 13 points looking much like his old self after missing time this year with an injury.

“He looked good tonight and he played well so hopefully he can rest up this weekend and get ready to go again next week,” Powell said. “He’s obviously a great player and a great leader for our team, and his presence was certainly felt tonight.”

That spark led to a 10-1 run to start the fourth for Thompson. In a key sequence, Walker hit another three to push the lead to seven.

Then, the Warriors got another stop on defense and a big offensive rebound from Lewis on the other end, which led to a quick dish to Dorolek for another 3-pointer to give them gave them their largest lead of the game at 47-36.

The range shown from Walker down the stretch gave Powell another senior guard to stretch the floor and hit big shots.

“Steven struggled early in the season beyond the arc, but here lately he’s come on and is taking better shots,” Powell said. “So in turn, he’s making more threes. That is an area he’s improved recently and we’re certainly excited to see that growth from him as well.”

Hoover continued to play hard despite hitting only one three in the fourth quarter, but the Warriors were able to close the game out from the charity stripe by hitting nine of their last 11 attempts.

Four Warriors scored in double figures with Hopkins leading the way followed by Roberson, Dorolek and Lewis. But Coach Powell was most impressed with his team’s energy and effort for all four quarters of the game.

“I think our guys really responded to the 50-50 balls. That’s an area that tough teams need to win, and I knew it was going to be a tough game so our guys were able to get a good number of 50-50 balls, and that led to some success as well.”