Latest on COVID-19, including vaccine information 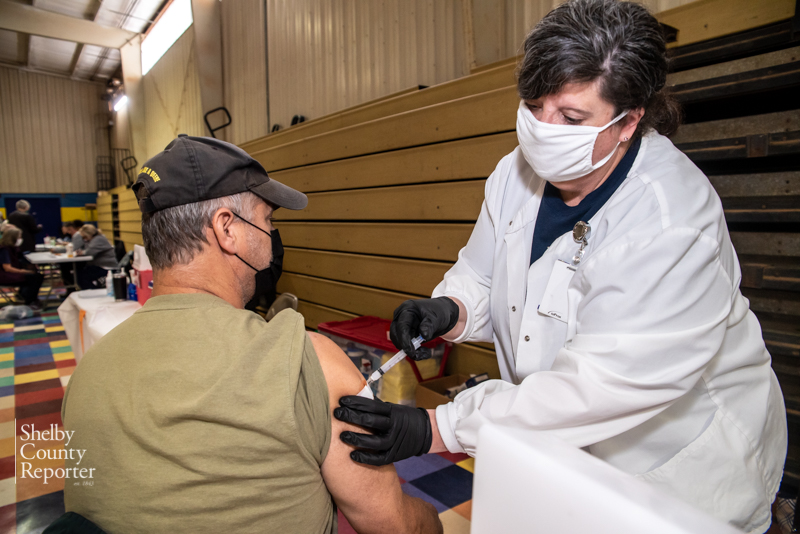 Jennifer Jennings with the Alabama Department of Public Health gives the COVID-19 vaccine at the Shelby County Exhibition Center on Tuesday, Jan. 12, during a special clinic. (Reporter photo/Keith McCoy)

Two months shy of the one-year mark in the battle against COVID-19 in Alabama, discussion has turned to the vaccine with buzz about who can get it, where they can get it and how they can set an appointment.

The answers to those questions have been inconsistent with different health care facilities not knowing when or how many vaccinations they will get at any given time.

In Shelby County, there are four locations approved to administer the vaccine right now according to the Alabama Department of Public Health, including the Shelby County Health Department in Pelham, Mainstreet Family Care in Pelham, Brooklere Pharmacy in Alabaster and Montevallo Family Medicine.

To this point, the vaccine has mainly been available to health care workers, but the rollout for others to receive it has been set in motion.

Beginning, Jan. 28, the Shelby County Health Department will begin to offer COVID-19 vaccination clinics each Thursday for first responders, health care workers and those 75 and older.

To get vaccinated at the health department, you must have an appointment, which are limited and can be made by calling 205-664-2470

Brooklere Pharmacy and Mainstreet Family Care have already been administering vaccinations to those 75 and older, but both have been short in supply and didn’t have any additional vaccines as of Tuesday, Jan. 19.

Brooklere can be reached at 205-664-1200 for an appointment when vaccines are available, while Mainstreet is asking for people to register for available clinics online when spots are open.

Outside of Shelby County, the Jefferson County Department of Health administered 1,400 COVID-19 vaccines on Monday, Jan. 18. They are open to anyone in the Phase 1A category and Jefferson County residents who are 75 and older. To find out if you are eligible or to register for an appointment, you can visit Jeffcoema.org or call 205-858-2221.

Whether it be directly related to the virus or the distance created from the holidays, Shelby County looks to be headed in a positive direction in regard to the virus for the time being.

Right now, the county is in the green low risk category, which means there has been a downward trajectory of positive cases for 14 days or that there has been a positivity rate of 10 percent or less for two weeks.

That marks one of the best two-week stretches in the county since the fall.

Statewide there has also been a decrease in new daily cases and deaths over the last two weeks.

There have been 49,817 across the state during the 14-day span, but testing has been near record highs with 265,180 tests administered during that span.

During the first week of the new year, 45.9 percent of those tested ended up being positive. During the previous two weeks, that has gone down drastically to 18.54 percent.

Since the beginning of the virus in Alabama, there have been 426,543 cases of the virus and 6,126 deaths, meaning 98.6 percent of those who have gotten the virus have survived.

There have also been an estimated 221,961 recoveries statewide according to the ADPH.