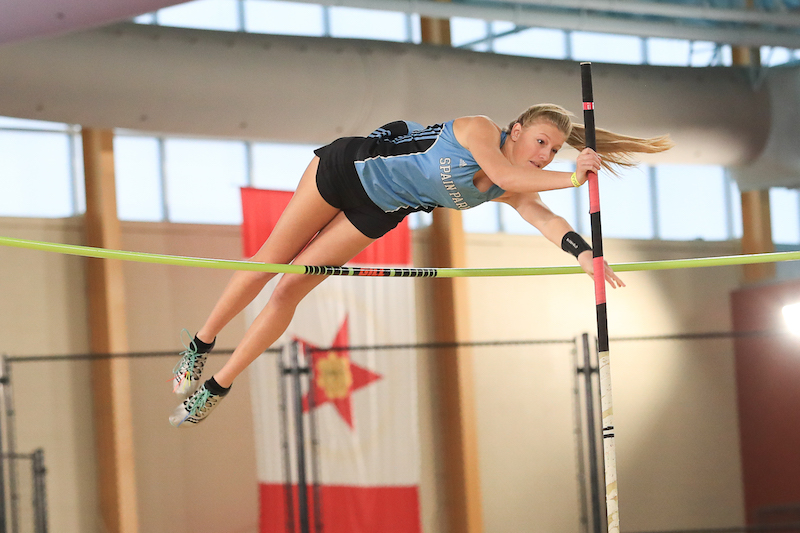 Anna Collins, above, was one of nine local athletes to finish first in their respective events at the MLK Track and Field Classic held at the Birmingham CrossPlex on Jan. 18. (File)

BIRMINGHAM – It was another successful day for local athletes at the Birmingham CrossPlex on Monday, Jan. 18, as several teams competed in the Martin Luther King Indoor Track Classic.

McPhail followed up a record-setting performance at the Ice Breaker Invitational 10 days earlier with two more records. The Chelsea runner finished first in the 3,200-meter run and the 800-meter run setting new personal records in both.

She was the only runner for the Hornets to finish inside the top three, but Thompson had three others grab a podium finish.

The Calera Eagles also had an impressive event thanks to three podium finishers, including a strong performance from Kobe Prentice in the 60-meter dash. Prentice finished the event with a time of 7.15 seconds to claim the top spot for the Eagles.

Beyond that, Calera also got a second-place finish from Brayden Harden in the 60-meter hurdles with a time of 8.75 seconds, while the 4X200-meter relay team finished second behind a time of 1:33.55.

Briarwood, Oak Mountain, Shelby County and Spain Park also had at least one athlete claim a first-place finish during the day.

Oak Mountain was led by Grace Knowles in pole vaulting, as she cleared 8 feet, 6 inches to take home first, while teammate Gracie Hollington finished just behind in second with a height of 7 feet, 6 inches cleared.

For the boys, Ethan Hammett finished second in the long jump thanks to a distance of 19 feet, 11 inches.

The Shelby County Wildcats were highlighted by David Vick in the high jump. The senior, who set a personal record 10 days earlier in the event, posted another strong first-place showing by clearing a height of 6 feet.

The Briarwood Lions were highlighted by Ansley Murphy in the pole vault event after she cleared 10 feet, 6 inches to finish in first place. Briarwood didn’t have another top-three finisher, but the Lions ended up with another 12 finishers inside the top 10 of their respective event.

Spain Park only had one athlete compete in the event, but that one athlete finished first. Competing in the heat one pole vault, Anna Collins cleared a height of 11 feet to take home first. She cleared one foot more than the next closest competitor.