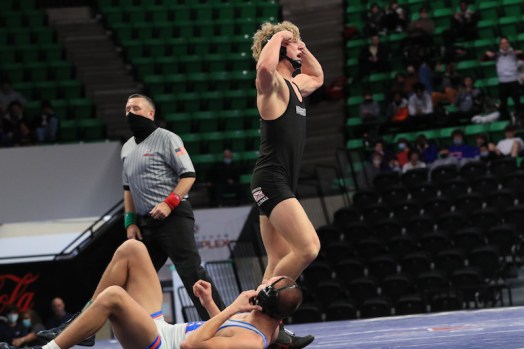 Thompson's Will Garrett celebrates after picking up a pin against Vestavia Hill's Jack Lamey to help the Warriors win their third AHSAA Duals State Championship in a row. (For the Reporter/Dawn Harrison) 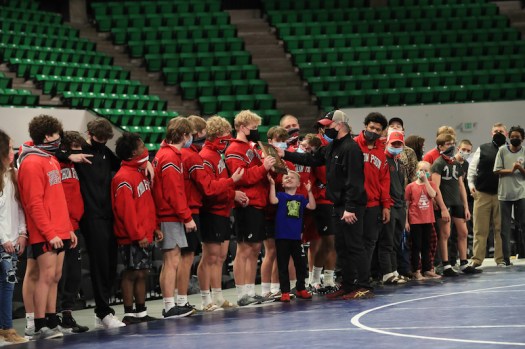 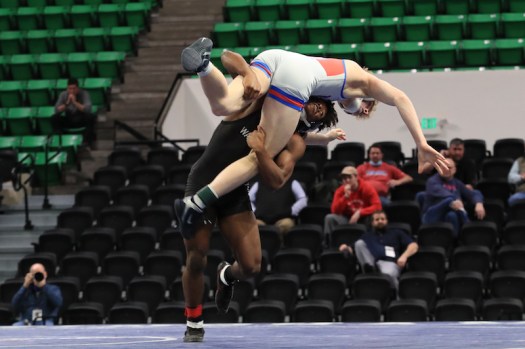 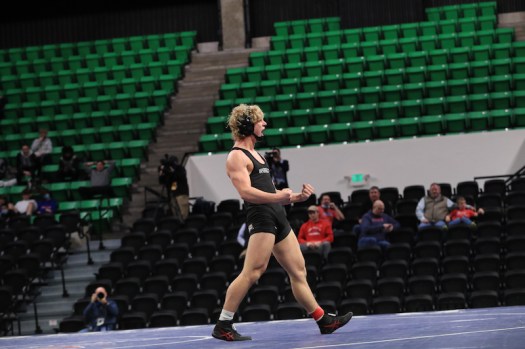 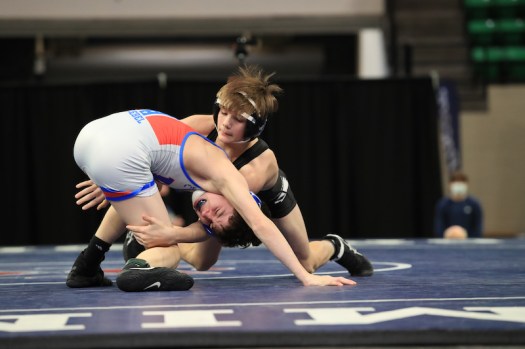 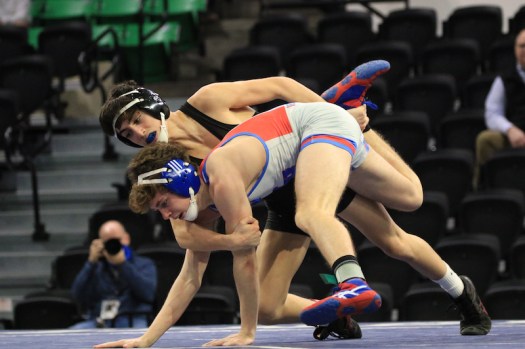 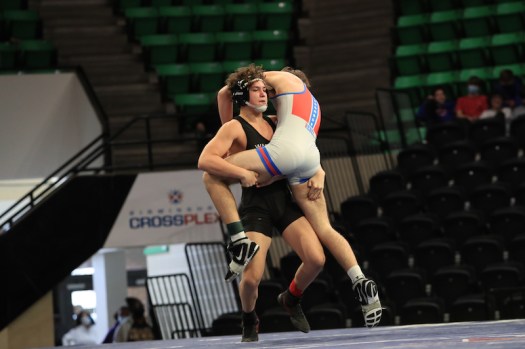 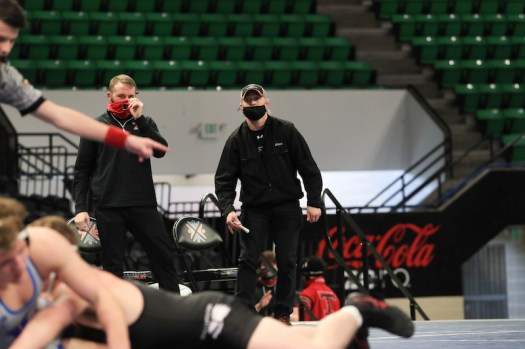 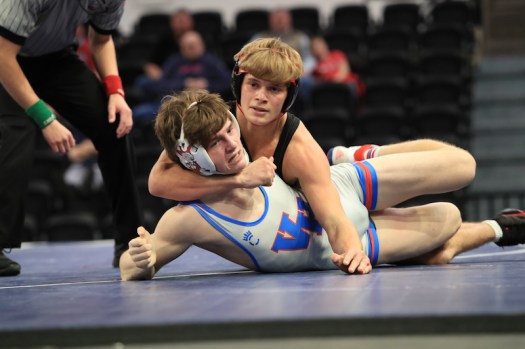 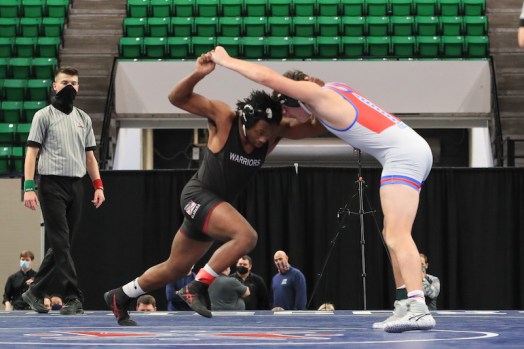 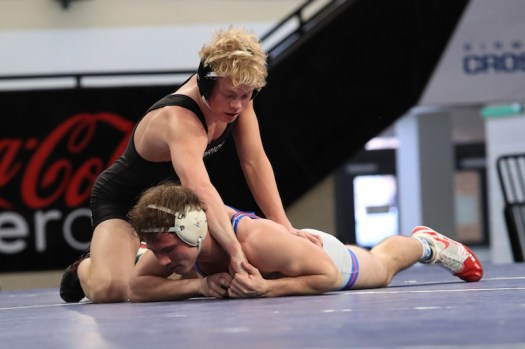 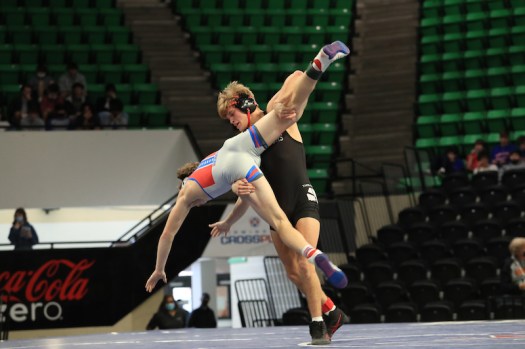 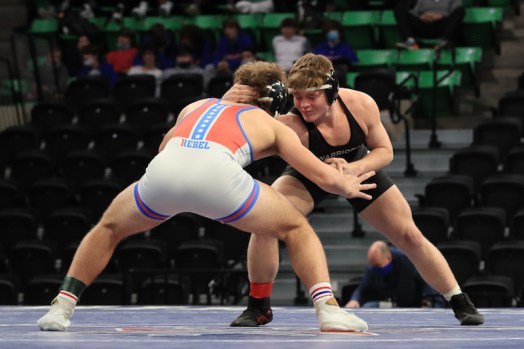 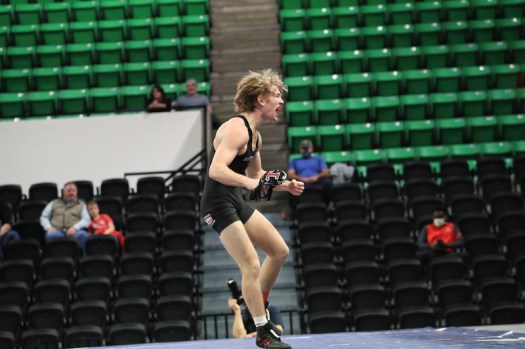 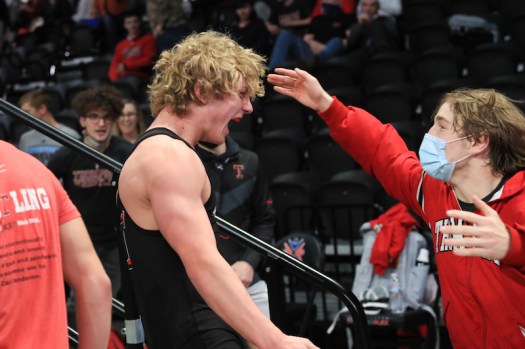 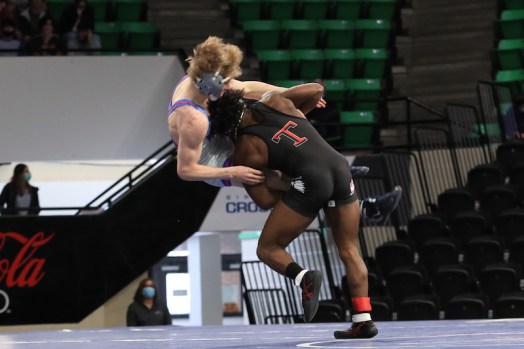 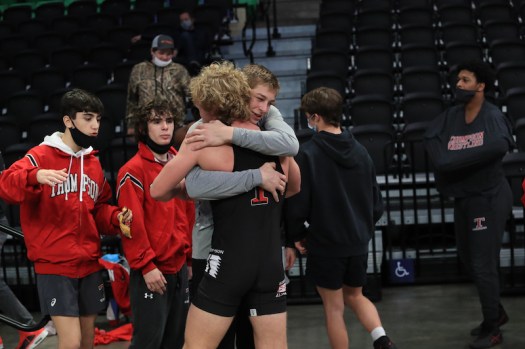 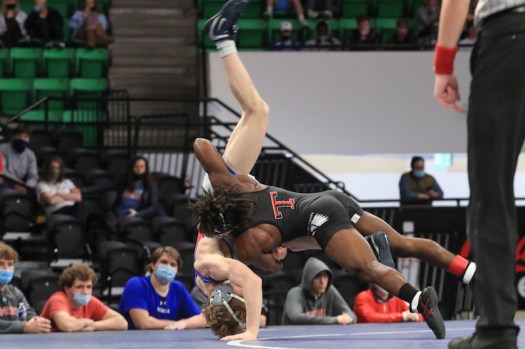 BIRMINGHAM – For the third consecutive year, the Thompson wrestling team once again found its way to glory by taking down the Vestavia Hills Rebels to win their third consecutive AHSAA Wrestling Duals State Championship on Friday, Jan. 22.

Winning the last two duals titles and as one of the best teams in the country for the last 10 years, Thompson had the pressure of living up to previous teams, but the Warriors didn’t crack under that welcome burden.

They led throughout the event and pulled off several important falls at the perfect time to grab a tight 33-25 win and three-peat as champs.

“The Duals format is different than the traditional State Tournament in the way that your guys need to help by moving around in the weight classes and shift the lineup in order to accomplish the ultimate goal of winning,” head coach Shawn Weltzin said. “Accomplishing that goal takes certain sacrifices from different individuals. Anytime you go up against a team like Vestavia, that’s real tough.

“You have to have kids willing to sacrifice being comfortable, keep pushing, and do what is best for the team. That could be bumping up a weight class, it could be a freshman stepping into the lineup, or it could be the guy that is outmatched by his opponent and simply doesn’t get pinned and that is what wins the Dual for the team.”

And it was a combination of those aspects that helped the Warriors claim the championship.

Thompson won eight of the 14 weight classes, but the night could have gone drastically different if it weren’t for some athletes winning clutch matches.

The Warriors used two pins, three major decisions and three decisions to total their 33 points and hold the Rebels to 25, with the two pins being crucial in the final score.

The night began with the 115-pound weight class when Thomas Giere of Thompson took on Vestavia’s Zach Flurry.

Flurry got the early advantage, and despite Giere battling back, it was Flurry who edged out a 2-0 decision win to kick off the match.

Dempsey was the first to put points on the board in each period, allowing Smith to escape only to take him down again. As the third period ended, Dempsey grabbed a major decision winover Smith with a score of 17-4.

Cory Jones added more points for Thompson in the 128-pound division after he grabbed early control as well and went on to pick up a decision win of his own by a final of 6-1.

In the 134-pound weight class, Yanni Vines stepped out of his comfort zone and bumped up a weight class to take on Vestavia’s Topher Hays.

The first period ended in a 3-3 tie, while neither scored in the second period. In the third period, as both teams yelled encouragement toward the wrestlers on the mat, the two again kept the score tied until the final seconds of the period when Hays was able to escape easing ahead by one point to end with a decision win of 7-6.

That was followed by Thompson’s first pin of the night in the 140-pound classification.

Thompson’s Wilson Kennedy was taken down early, but in the second period, he came back to take down Vestavia’s Clay Johnston, eventually finishing off his opponent with a fall time of 3:51.

A state champion for the Warriors, James Latona proved why he is ranked first in the state when he took on Vestavia’s Leighton Reese in the 145-pound weight class.

Latona controlled the entire six minutes, allowing Reese to score an escape just so he could take him down again.

He came close to a pin, but never could close it out, eventually picking up a major decision win of 15-4.

In the 154-pound weight class, Harris Mitchell of Vestavia earned points thanks to a technical fall against Thompson’s Paxton Miller with a score of 20-5.

Will Garrett, however, stepped up in a big way for Thompson in the 162-pound division.

Garrett, who was wrestling up a weight class, took on state champion Jack Lamey, who was looking for redemption after losing to the Thompson wrestler in December.

The first period was a test of strength and skill as neither opponent was able to score on the other. That changed in the second period when Garrett was able to gain an escape and then capitalized when Lamey fouled on a throw, allowing Garrett to take Lamey to his back and pin him with a fall time of 3:12.

Thompson’s Will Miller, a two-time state champion, added more points to the Warriors’ total with a win in the 172-pound weight class, taking down Vestavia’s John Edwards with an 8-3 decision.

In the 195-pound weight class, Carson Freeman controlled his match against Trey Saunders, eventually pulling away for a 15-7 major decision.

That was followed up by a win from Thompson senior Jeremiah Coney’s decision win over Andrew Sykes in the 197-pound classification, which ultimately cemented the championship for the Warriors.

His decision win of 4-2 put Thompson in front by an insurmountable lead, which became key as Vestavia Hills won the 222-pound weight class, the heavy weight division and the 106-pound weight class to make the final score tighter than the match appeared.

The Warriors are now on track to bring home fourth consecutive traditional state championship in a few weeks, as the season will culminate in the 7A State Championship at the Birmingham CrossPlex.