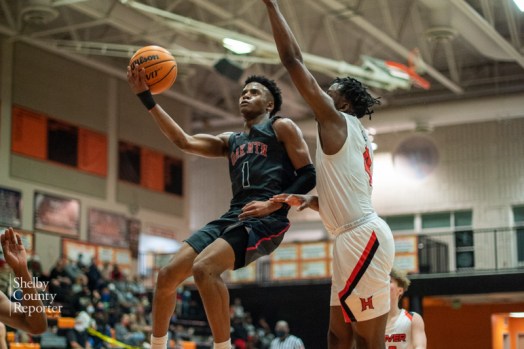 Evan Smith floats by the defender for a layup in Oak Mountain’s win against Hoover on Friday, Jan. 22. (Reporter photo/Keith McCoy) 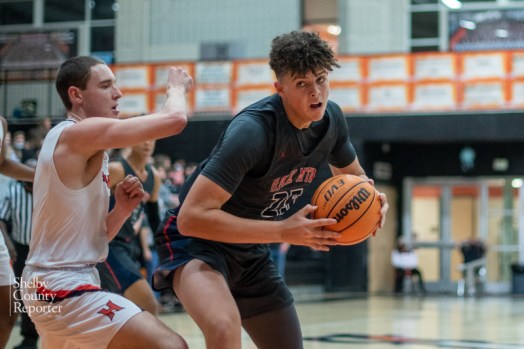 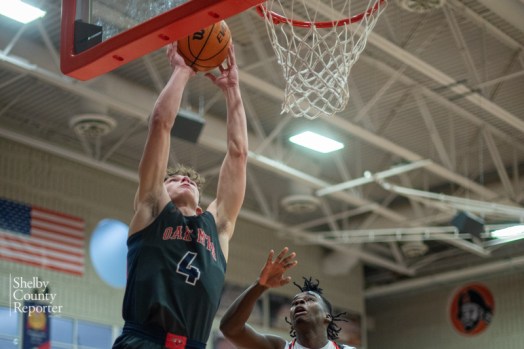 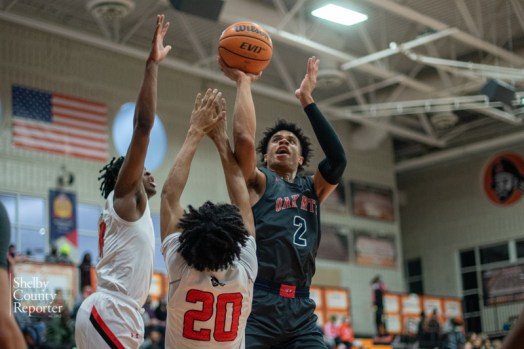 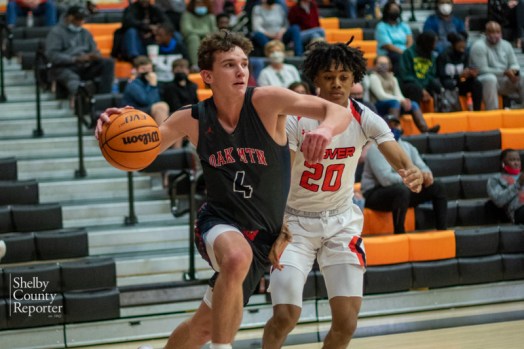 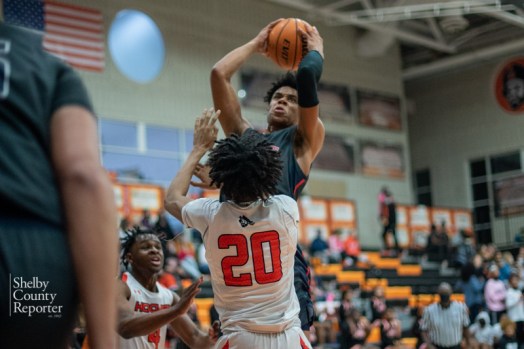 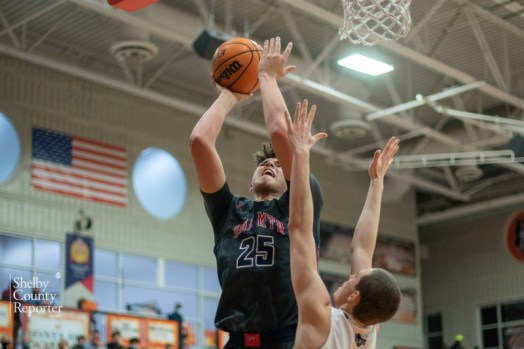 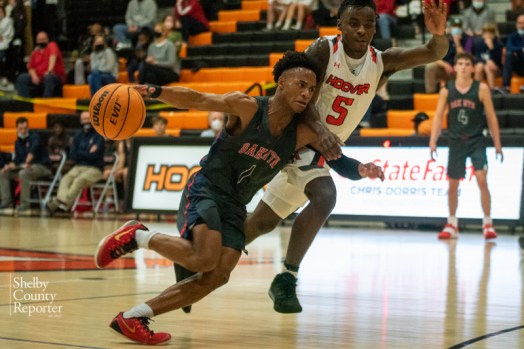 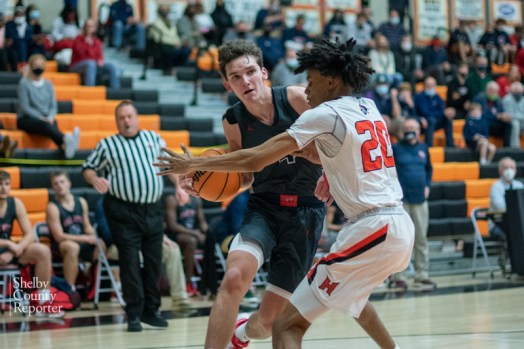 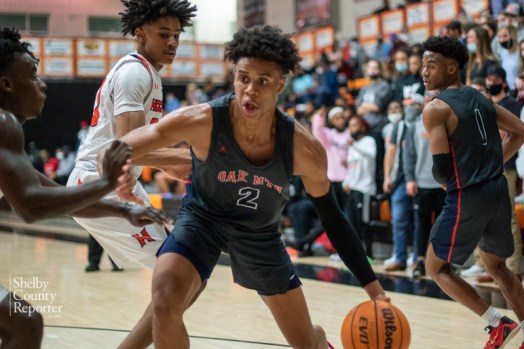 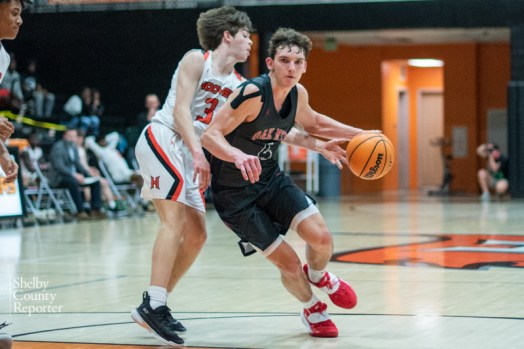 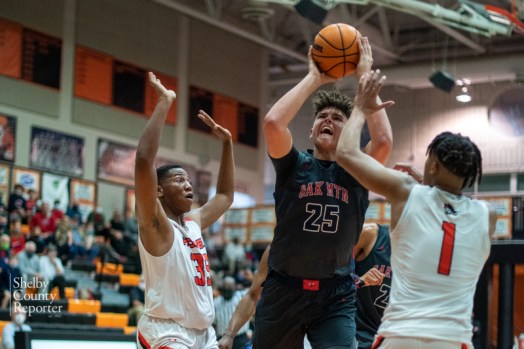 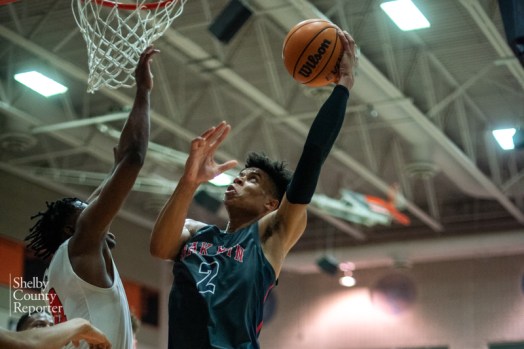 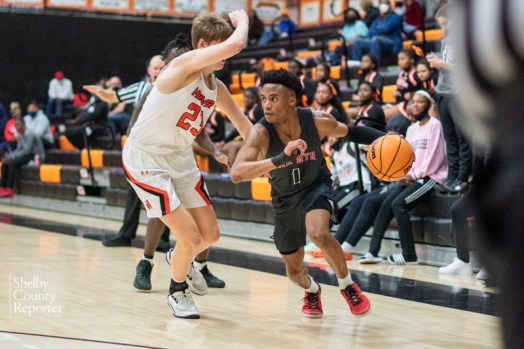 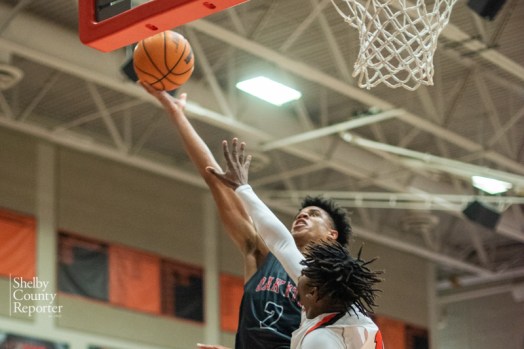 HOOVER – Taking on a second consecutive area opponent ranked inside the Class 7A top 10, the Oak Mountain Eagles were searching for redemption on Friday, Jan. 15, in an area road matchup with No. 6 Hoover.

Two weeks earlier, Oak Mountain led No. 4 Hoover at the half, but couldn’t find a rhythm in the second half, eventually losing 54-39. That was part of a 0-2 start to area play for the Eagles, but it was also a stretch they were without junior starters Will Shaver and Evan Smith.

Both, however, returned to the lineup together for the first time against Thompson earlier in the week in a 67-56 win against the No. 7 Warriors to show the difference they make in the lineup.

The Eagles used the confidence boost of being the healthiest they’ve been in the new year to get a redemption win, but in a way you might not have expected.

With those two athletes back in the starting lineup as major scoring threats and facilitators, as well as shooters like Brady Dunn, Noah Young and Wilder Evers, you would have expected Oak Mountain to outlast the Buccaneers in an offensive battle.

However, it was the defense of the Eagles that made the true difference in the game. They held the Bucs to nine or less in the first three quarters of the game to build a 35-20 lead, before closing the game with their best offensive quarter of the game to pick up a 50-35 win.

The win gives Oak Mountain two straight against top 10 teams, but more importantly back-to-back area wins to improve to 2-2 in area play, putting every team in a tie for first with a week left on the area schedule.

Oak Mountain got off to a perfect start on both ends of the floor. With Hoover not facing Shaver in the opening game between the two this year, the Eagles lived through him in the first quarter on the offensive end.

He powered through an and-1 early in the quarter and totaled seven points offensively. That, along with four from Evers and two from Smith, helped the Eagles score 13 points.

That was more than enough for the early advantage thanks to a defense that came ready to roll. Oak Mountain allowed just two field goals and five points in the opening quarter to jump in front by eight at the end of one.

Despite the Eagles losing the offensive touch in the second quarter, scoring eight points behind two 3-pointers from Young, the defense followed up a strong first quarter by allowing six points in the second period to extend the lead to 21-11 going into the halftime break.

Coming out of the half, the Eagles continued to play lock-down defense by allowing less than 10 points for the third quarter in a row. They gave up nine, while Young, Evers and Matthew Heiberger each scored at least four points in the quarter to help them total 13 more points and extend the advantage to 15 ahead of the final eight minutes.

That’s when Hoover hit desperation mode and started to find a way to score offensively, leading to 15 points in the final quarter from the Bucs.

But Shaver bookended an impressive start with a strong finish thanks to nine points in the period, while Young added six more himself to help the Eagles match the 15 points from Hoover to close out the 50-35 win.

Shaver led the way for Oak mountain with 18 points and eight rebounds, while Young was just behind in both categories with 16 points and six boards. Evers added nine points, while the defense was a collective team effort.